You are here: Home / Featured / Visual Arts Feature: Me and Philip Guston

Our discussions always took the same turn. Philip Guston attempted to convince me that artists like Piero della Francesca and the cave painters of Lascaux were in the first place abstractionists.

The teacher who inspired me to study art history, at Washington Square College of Arts and Sciences, New York University, from 1956 to 1961, was H. W. Janson (1913–82). Janson was a powerhouse of a man, of whom I was afraid and to whom I was deeply attached. His brilliance in the classroom entranced me, and his unrivaled skill as a networker and patron got me into graduate school with a three-year fellowship and provided me with invaluable introductions. He also had a department secretary named Barbara Percilik with whom I was in love. But then again, so were most of the students in Fine Arts, even some of the girls. The only ones who might have been getting anywhere with her were two older students named Big Bill and Little Bill.

Many were the beneficiaries of Janson’s protection. The most distinguished of all was his contemporary, the painter Philip Guston (1913–80). They met in the 1940s at Washington University in St. Louis, where Janson taught and was curator of the university art museum and Guston was artist-in-residence. Janson bought for the museum work from Guston that has gone into the canon of American art.

Two years after Janson moved on to NYU in 1949, Guston was hired—undoubtedly on Janson’s initiative—to teach drawing in the studio program at Washington Square College. He stayed there until 1958. Although I never took a studio course, I was a regular at the office, where I would run into Guston from time to time. We got to talking to each other about art. In those discussions, he came across to me the way his art struck Aidan Jones in a review of a show of Guston’s work at the Royal Academy in London in 2004: “dispassionate and angry.”

In the early 1950s, Guston was struggling on the outer ring of Abstract Expressionism. According to his daughter, between 1948 and 1956 he sold only two paintings. 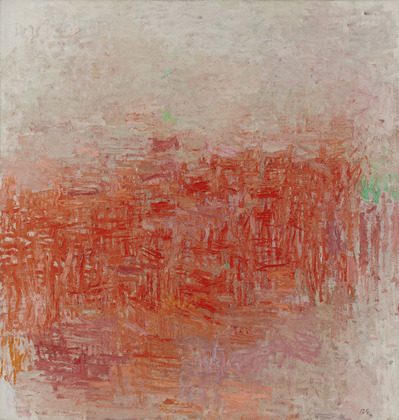 This canvas in the Museum of Modern Art, titled Painting, was made in 1956, the year when we first met and when his breakthrough occurred after Sidney Janis took him on at his gallery. In 1958–59 he was one of the luminaries of Abstract Expressionism included in the legendary exhibition “The New American Painting” that traveled throughout Europe before coming to the Museum of Modern Art. The very non-objectivity of the art was presented as a manifestation of the kind of freedom uniquely enjoyed by Americans.

Ten years later, Guston made history by reintroducing recognizable figures and anecdotal subjects, along with humor and irony, into his art. As in this painting of 1973 entitled Painter in bed, also in MoMA. 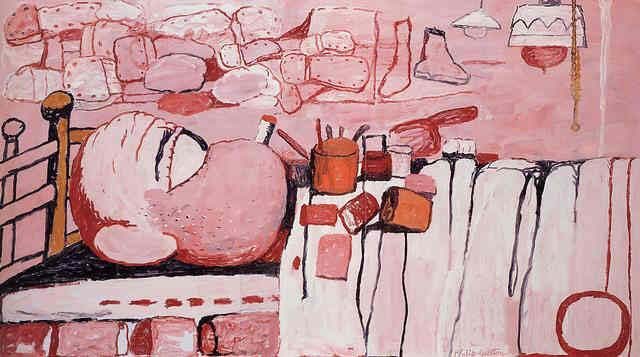 Debate over this move and what it means for the relation between realistic and non-realistic art was very heated at the time and has resurfaced periodically. It provides one of the staples for discussion of the main modes of art in the 20th century. A new highpoint was reached with the dissertation of Robert Slifkin at Yale University in 2007: “Out of tune: Philip Guston’s return to figuration and the crisis in the humanities,” of which an extract was published in The Art Bulletin in June 2011: “Philip Guston’s return to figuration and the ‘1930s Renaissance’ of the 1960s.” Reading that article, I decided that the time had come to tell about my talks with Guston of the latter 1950s.

What we discussed was Guston’s big question: the relative primacy in art of abstraction versus realism. Guston insisted that abstraction came first and was leading; freshman/sophomore Schwartz stood up for representation. It was not that I was antagonistic to the practice of abstract art. As a student of art history at a with-it university in Greenwich Village in the 1950s, I would have had to be defiantly reactionary to dismiss abstract art, and that I was not. Although in those years I never met any other important artist beside Guston, I did hang around the Cedar Tavern on University Place and the White Horse on Hudson Street trying to spot them. As a young-looking 16- and 17-year-old, I could not order drinks at the bar, but at these places, in those years, they didn’t kick you out if you shared a pitcher with a friend who looked older. (I indulge in small talk. Guston didn’t. We could have talked about being Jewish—his name was Goldstein, which I did not know—in a field that has not been open to Jews for very long, but we didn’t.)

Our discussions always took the same turn. Guston attempted to convince me that artists like Piero della Francesca and the cave painters of Lascaux were in the first place abstractionists. True, they painted subjects, but what mattered to them most as artists was form and sheer pigment on surface. Taking my cue from my understanding of what I learned from Janson, I argued that form and content were inseparable, and that content was prime. The cave painters were out to create not artistic designs but images of the animals they hunted.

That we returned a number of times to this debate was due to nothing else, as I see it, than Guston’s need to thrash out an issue concerning which he was in inner turmoil. He was not prepared to cede an inch in the standpoint he expressed, but it said a lot that he was ready to listen to—even draw out—the contrary opinions of a beginning student less than half his age.

Not having been paying attention to current American art, I did not realize until the 1980s, when Guston’s shoe paintings were the subject of a posthumous exhibition in the Stedelijk Museum in Amsterdam, that a decade after our talks, he abandoned pure abstraction. I left the museum in vain wonderment at the thought that I had been an extra in one of the great dramas of art in the 20th century.

The young Guston—still Phil Goldstein—is frequently mentioned in the correspondence of the amazing Pollock family (originally named McCoy; a lot of ethnic writhing was going on). I read this in American letters, 1927-1947: Jackson Pollock and family, a gripping volume of epistolary art history published last year by Polity. The book was edited by Francesca Pollock, the daughter of Jackson’s older brother Charles Pollock (1902–88), with notes by Charles’s second wife, Sylvia Winter. They have been my friends since the 1980s, and I had the privilege of meeting Charles as well in his declining years. The family correspondence, mainly concerning four brothers all of whom were artists, is unexpectedly as much about radical left-wing politics as about art. The idea that art existed for the improvement of society was deeply inbred in the family. There is no mention of Pablo Picasso, let along of Marcel Duchamp, but all the more of the great Regionalist Thomas Hart Benton (1889–1975), a declared enemy of modernism. The terms for Guston’s later conversions, from realism to abstraction to figuration, were laid down by the 1930s.

My conversations with Charles Pollock were not at all adversarial. He was the soul of quiet distinction. It was very touching to rediscover him in his letters, setting an example to his younger brothers for living a good life. The deepest impression made on me by American letters is what a struggle it was to keep your head above water in the 1930s and ’40s. But also that it could be done, with family incomes smaller than teenagers’ allowances today, and that it could be done with dignity. This is a message whose relevance, while it may be threatening, also contains reassurance.