You are here: Home / Books / Book Review: Can the iPad Save the Short Story? 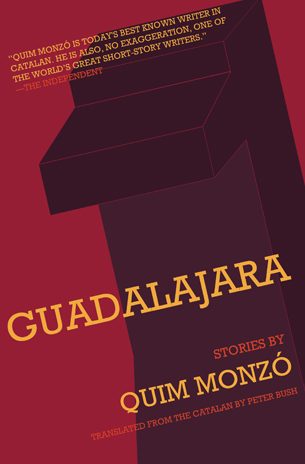 Less is more runs the minimalist writer’s well-worn motto. But it begs the question of just why there can’t be more of a good thing. Of course, in a culture increasingly built on Tweets it may be the only way to go: cutting to the chase has become an obsession. The fiction of Catalan writer Quim Monzó anticipates this technologically enhanced fear that an author will overstay his or her welcome. Monzó’s afraid of giving the reader too much; his fear is that an author can take an idea only so far before boring the reader.

After all, what reader hasn’t become disgruntled once he or she thinks a good premise has gone nowhere, leaving him or her with nothing but disappointment and a simmering feeling of betrayal? Thus the savvy writer compensates for imaginative burn out by writing, in the mischievous case of Monzó, stories that are very short, surreal, and wittily sour. His tales grab you by the throat, begin to choke you, but don’t last long enough to go for the kill.

That terror of not being able to finish off the reader is at the center of “Books,” the final story in Monzó’s collection Guadalajara. Trying to decide which of the four books he recently purchased should be read first, the narrator concludes that the longer and more complex the plot the stronger the risk that the author will fall on his pen: “Will the writer keep us entranced until the last page? . . . Won’t there ever be a time, from here to the fifth, eighteenth, or one-hundred-and-sixty-seventh page, where his spell will be broken. But a narrative is never as good as the possibilities that fan out at the beginning.” Thus Monzó’s stories in this intriguing gathering, his superior earlier collection O’Clock (Ballantine, translation by Mary Ann Newman), and his disappointing novella Gasoline (Open Letter, translation by Mary Ann Newman) pivot on the quick assertion of a clever idea, an acidic literary satire, or a science-fiction conceit.

How much variety of incident or depth of characterization can you introduce into a tale without smothering the primal spark? How do you preserve inspiration on the page? The anxiety may owe much to what drove post-modern, experimental fiction of the 1960’s and 70’s (Donald Barthelme, Robert Coover, and company), but it takes on particular relevance as contemporary short stories are increasingly tailored for iPad consumption and Tweet-orientated attention spans.

Manzo’s favorite device (which he favors to overuse) is the reversal, a negative polarity that puts a humorously Manichean spin on the familiar. The most amusing literary flip-flop in Guadalajara is “Gregor,” which pokes sardonic but poignant fun at Franz Kafka’s “Metamorphosis.” Here a young insect wakes up to find that he has become “a fat boy” who, understandably, terrorizes his family at a glance: “He twisted his head to the left and saw them, an unimaginative distance away, motionless, observing him, in horror and fear.” The boy struggles to his feet, goes to his room, interacts with his parents, and proceeds to provide the preordained squishy ending.

The other lit-oriented tales are also “what ifs” that play with expectations, though not in ways that surprise the reader. “Outside the Gates of Troy ” explores with graphic realism what would have happened among Ulysses and his men if the Trojans hadn’t accepted the Greek gift of a giant wooden horse; “A Hunger for Thirst and Justice” runs the Robin Hood yarn to its absurd yet didactic limit, with the poor becoming the rich and the rich becoming the poor.

More interesting are the “Twilight Zone” tales whose bizarre premises remain mysterious, particularly the opening story, “Family Life,” which deals with the rise and fall of an insane domestic ritual that demands mutilation—once a child approaches puberty his ring finger is chopped off. In this instance, Monzó’s customary deadpan carries a genuine chill via the adolescent narrator’s acceptance of horror as natural: “As he saw it, in order to hit adolescence and abandon the word of little kids, he too would have to lose his ring finger. He thought it was understandable, normal, and desirable, like losing his milk teeth.” Better yet, the story develops into a weird parable about artistic competition and the ugly price creativity demands.

Also of interest is “Centripetal Force,” which at first focuses on a man who is unable to leave his apartment “because he can’t see the landing only the hallway he’s trying to leave at that exact moment.” The existential angst spreads among other characters, who never show much emotional confusion or desperation at finding a black hole in existence—they, like most of the characters in Guadalajara, generally accept their destinies with surprisingly rational dispatch.

Monzó is at his best when he sets up a fable that frustrates our initial intimation of closure. In the revealingly titled story “Literature,” a baffled writer contemplates that “no law decrees that the norm has to be eternally realized. He thinks all the while as he sets the table; he is aware of the situation and is going to try to avoid the inevitable.” But too few of Monzó’s metaphysical prisoners elude escape their fates because the writer doesn’t recognize that imaginative development can expand as well as contract possibilities. He doesn’t play with alternatives; he narrows them down.

Thus the author’s dependence on plot reversal cuts against imaginative freedom—his figures always surrender to “the inevitable” in a tight-lipped manner, caught in a cyclical bind that tends toward the formulaic and the mechanical rather than the refreshingly disorientating. For instance, “The Lives of the Prophets” is a yo-yo allegory that moves from a prophet who knows but can’t tell the future to his son, who can reveal the future with ease but can’t choose which events he foresees. “A Day Like Any Other” features a predictably credulous response to a compulsive liar, while “Life Is So Short” is the obligatorily hellish “trapped-forever-in-an-elevator” story.

Even when it revolves around the otherworldly, the structural parsimony devolves into the pedestrian. This is not to say that Guadalajara doesn’t provide plenty of brain-tickling pleasure via veteran Peter Bush’s smooth translation. Monzó, who was born in Barcelona in 1952, has been a comic strip artist, a newspaper columnist, and reporter. He has written for film, radio, and television and won a slew of awards in Spain for his fiction. But given the intellectual and emotional slimness of Guadalajara, it is difficult to accept The Independent‘s claim that Monzó is “one of the world’s great short story writers.” I would say one of the world’s most ingenious. 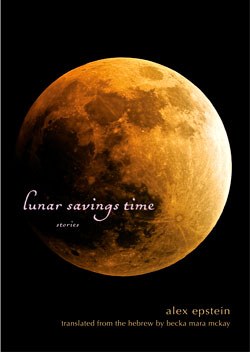 Israeli author Alex Epstein’s allegiance to the minimal and the surreal is even more severe than Monzó’s—most of the 99 stories in Lunar Savings Time, as in his previous collection Blue Has no South (Clockroot Books, translated by Becka Mara McKay)—are barely a page long, many only a sentence or two. Like the Catalan writer, he is fascinated by myth, literature, allegory, and reversal, as in the book’s opening testament to literature’s force in “On the Power of Russian Literature”:

But Epstein’s mini-narratives, unfinished or enigmatic parables, are less rooted in Monzó’s fear of losing the reader or literature falling prey to creative entropy than exploring the fragment as a lyrical, usually antically dadaesque, generator of images of exhaustion and replenishment, stasis and transformation.

Epstein provides memorable glimpses of emptiness, as in the “More Preparations for a Long Journey”: “In the ashtray [and perhaps in the world] there is no more room. Icarus raises his hand to the ceiling.” Yet against that prosaic ceiling Epstein raises a variety of fantastic, supernatural, or whimsical “perhaps-es”, from “The Woman Who Repairs Time Machines (“If time travel were possible, nobody would stay in his time”) to the Black Angel (“Only the soles of his feet were pinkish and his girlfriend—as the tabloids discovered—was white”), “The Oldest Jew in the World,” and “An Innocent Legend” (“Once upon a time there was a man who always dreamed intoxicating dreams about flying at a medium attitude”).

The risk of this whimsical playfulness is preciousness and sentimentality, and there is some of that in this collection (“Once upon a time there was a legend about a lighthouse that turned into a ship, and sailed all the seas of the world and, when trying to return, was shattered on the rocks of its childhood”); the oblique approach to Middle East politics—given the inevitable questions of victims and power raised by his fractured fairy tales—is treated with annoying coyness in pieces such as “Cobalt Blue.” There is an interesting, if at times strained, use of iPad and Facebook references (“Ezra Pound had a hundred thousand followers on Twitter. Emily Dickinson was more of a Facebook person”); he seems to be simply using Social Media as smiley fodder for his fancy. A more successful treatment of modernity is a long (for Epstein) story about how Kafka would have lived his life if he has not died in the 1920’s, had survived the Holocaust, and moved to Israel.

Critics in Epstein’s homeland have compared his writing to Kafka, Rimbaud, Baudelaire, and Borges—I don’t sense the latter’s diamond-hard, cerebral back bone in his charming, gossamer miniatures (softcore surrealism doesn’t raise questions but begs them), yet Lunar Savings Time shows that the postmodern (super) short story can be as much about preserving beautiful possibilities as racing to finality before our focus wanders.