You are here: Home / Books / Book Review: An Intriguing but Annoying House of Exile

Ambitious, by turns captivating and exasperating, this sprawling book is like an enormous photomontage—that popular German art form of the 1920s—made up of textual mosaics from newspaper articles, diary entries, letters, novels, or, on occasion, FBI files.

House of Exile: The Lives of Heinrich Mann and Nelly Kroeger-Mann by Evelyn Juers. Farrar, Straus and Giroux, 384 pages, $30. 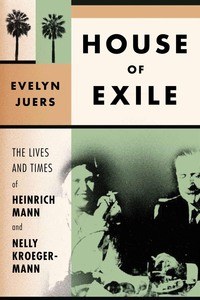 In the decade between 1933 and 1943, half a million German citizens fled their country. Among them were the brothers Thomas and Heinrich Mann. Thomas (1875–1955) had been awarded the Nobel Prize for Literature in 1929; his older brother Heinrich (1871–1950), essayist, novelist, and playwright, was an internationally celebrated public intellectual. Thomas had his Jewish wife Katia and six children to support; Heinrich had only his partner Nelly Kroeger. They are 10 of the cast of hundreds—the cream of Central European authors, artists and intellectuals including Bertolt Brecht, Sigmund Freud, Alexander Doblin, Stefan Zweig, Walter Benjamin, Joseph Roth, Robert Musil, Lion Feuchtwanger, and their families—featured in what is billed as a group biography.

Ambitious, by turns captivating and exasperating, this sprawling book is like an enormous photomontage—that popular German art form of the 1920s—made up of textual mosaics from newspaper articles, diary entries, letters, novels, or, on occasion, FBI files. These bits—words, phrases, entire paragraphs—are usually unattributed and range from notes about literature and publishing to medication, pets, shopping for and preparing food. Juers also mines the writing of non-German writers, including Virginia Woolf and James Joyce, to contextualize the time and the refugees’ situation.

Both the book’s style and content are arresting; moreover, Juers mines sources unavailable to the average English-speaking reader. But House of Exiles is a problematic work of biography and had I not been reviewing it, I would have put it down long before its end.

Juers seems undecided at first as to her subject and meanders from one to another. In the first part of House of Exile, she sketches a history of the Mann family, with an emphasis on its roots in Lubeck, Germany, its Brazilian-born, artistic mother and businessman father; its deeply competitive writer brothers; and its youngest daughter Carla, who becomes a minor actress before committing suicide.

Then, after a brief look at Heinrich’s early sexual life, comes lengthy speculation about the possible paternity of Nelly Kroeger, adopted daughter of a fisherman. Juers is fascinated by the love affair, then eventual marriage, between the intellectual and the bar girl, a December-May, cross-class alliance that endured far longer than anyone imagined. Juers devotes one sentence to Thomas’s marriage to Katia. Why? Only then, in chapters that are organized by year — 1934–1944 — does she begin to tell the saga of a generational migration across the world by a group of middle-aged, middle-class intellectuals and artists stripped of their language, livelihoods, past and future.

The first page of House of Exile demonstrates the charms and drawbacks of Juers method.

“Approaching from a distance, hand in hand like lovers, the tall blond and the old gentleman both called out to him—Brecht! He turned toward them and waved. The California sun glinted from his glasses like the sword of Zorro . . . on this day in the summer of 1944, just before the German generals’ attempt on Hitler’s life, the news had spread like wildfire through the community of European exiles in Los Angeles that a farmer from the north was selling berries at the market.”

My expectation that this engaging introduction of Central Europeans in search of their beloved currants and gooseberries would be developed was undercut by issues of credibility raised memorably by a verse of poetry by Wislawa Szymborska:

It could have happened
It had to happen
It happened earlier. Later.
Nearer. Farther off.
It happened, but not to you.

Heinrich Mann, we learn is (possibly) recalling this scene a few months later, just after his wife Nelly has killed herself. Was the market scene the author’s paraphrase of a diary entry by Mann? The author’s partial or full imaginative recreation? Should we suspend disbelief and just go with it? I couldn’t. I was too bothered by the sun that glinted off Brecht’s glasses “like the sword of Zorro.” Whose descriptive musing is that?

House of Exile is billed as non-fiction, but there are no footnotes, no index, no explanation of the author’s methodology. Some direct citations from other writers’ works are indicated by italics but Juers’ selections and paraphrases (a high school teacher grading a book report might call them plagiarism) are largely unacknowledged. In a perfunctory afterword, she lists the primary and secondary sources she read. The reader is left to speculate on what actually occurred and what Juers invented.

That’s a pity because once Juers situates the various Manns into place in her narrative, House of Exile unfolds with the power of a modern German Requiem. Its protagonists are ill-suited for the trials ahead of them. Their ordinary professional, physical, and mental health problems all worsen as they become refugees. The writers lose their language, their publishers, their readers. As the 1930s unfold, as Hitler bans and burns books, some are lucky enough to find refuge in Switzerland, England, or the Americas. The majority are trapped, with meager resources, in Czechoslovakia, Holland, Scandinavia, and France.

Some, like Robert Musil in Switzerland and Kurt Tucholsky in Sweden, die even before the war begins. The rest struggle to support one another financially and morally as things get ever worse. After France falls in 1940, they make their way from the Free Zone across the Pyrenees (60-year-old Heinrich and entourage by foot, in a riveting little snippet starring Alma Mahler-Werfel and her husband Franz) to Spain, Portugal, then across the ocean to the New York, Princeton, Chicago, L.A.

Although this is literary territory well-traveled, Juers gives it a particular spin. Born in Germany in 1950, she has lived since 1960 in Australia, which perhaps explains the curious way that country keeps popping up in her narrative. Although she tells the reader nothing about herself or her biographical criteria, the reader is asked to trust the significance of her selections and the order of the narrative. Questions abound about her choice of protagonists (why this Mann sister and not that one?), texts (Why this Woolf journal entry and not another?), and juxtapositions (Huh? What’s she doing this for?).

Eventually, It was hard for me to suspend disbelief and trust the narrator. Juers seems to have a working knowledge of the literature in the original (many of the books she references were never translated into English or have long been out of print) and her second-generation fascination with her subject is evident. I enjoyed her partiality toward and the time she spent on Carla Mann and Nelly Kroeger-Mann, but I wanted to know more about how artistic women like Helene Weigel or Elsa Lasker Schuler coped beyond ironing, cooking, and—in Weigel’s case—getting repetitive stress injuries typing up her husband’s manuscripts. Some indication of authorial intent would have been useful.

Perhaps in anticipation of such criticism, Juers inserts occasional hints and defenses of her method:

“From my forays into the past I often return with little more than a clutch of names and dates, cold facts. I pick through them like someone looking for coins in the pockets of an old coat, blindly feeling for unexpected details to emerge, blunt or buffed or dented, that will clink together, pay my fare, take me to yet another point of origin.”

“Musil once thought he might construct a person from nothing but quotations.”

“Thomas finished Lotte at the end of October. He said it was a rich fabric of references, much of which is compilation and appropriation, exploiting of sources.”

Some pages earlier, she describes a project of Thomas Mann’s son Klaus, who is preparing a book with his sister Erika about the German emigration: “In a form as dramatic and varied as possible, it will describe the lives of the exiles, the famous as well as the unknown. Apart from our text, we want to include the protagonists’ personal documents, by which I mean diaries, or letters to us, or short autobiographies.” What happened to this project? Juers seems to have taken it on, but because there is no explanation of any kind of what Klaus did with the idea, we are left to wonder.

This annoyed rather than titillated me. After all, she is writing about real people, dozens of them, and extremely interesting ones at that. Her heroine Nelly Kroeger, Heinrich’s vivacious, increasingly alcoholic and suicidal wife, has already been portrayed in fiction—once by her husband. He read a manuscript of her autobiography, decided he could do better, threw hers in the fire, and published a fictionalized version. I wanted the facts. Juers admits that she lacks facts about Nelly and has to reconstruct her life by analogy and speculation. “It’s possible that,” she writes. And “I imagine that . . . We might suppose that . . . let’s assume that.” These are possible ways of bridging gaps in the historical record, but their overuse creates doubt in the reader.

While House of Exiles gives us small, concrete glimpses of daily life in exile, the larger narrative is paradoxically suffused with vagueness. I often wondered why Juers selected a particular diary entry, who wrote it, why it appeared where it did. What city were we in at the moment? What year? In addition to deciding against providing a strong narrative voice, Juers also evinces little interest in delineating foreground and background.

Like most readers of a book of quotations, I kept putting the book down and picking it up again. Juers raises many questions in House of Exile, though perhaps not the ones she meant to.

Helen Epstein has written or translated several volumes about the second world war and Central Europe. Several of her books are available on Kindle.