You are here: Home / Books / Book Review: “Yoga” – A Valiant But Flawed Exercise in Overthinking

Yoga by Emmanuel Carrère. Translated from the French by John Lambert. Farrar, Straus and Giroux, 335 pages, $14.99 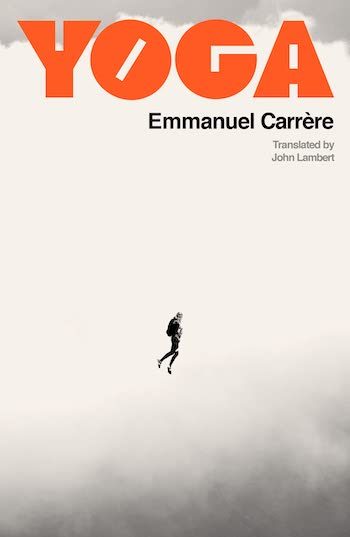 There may be no figure more disparaged in American culture than the self-proclaimed deep “thinker.” Eggheads are long-running figures of fun in popular culture, sauntering about reading Dostoyevsky or pontificating on the meaning of time. What’s ridiculed these days is that this meditation on higher things comes off as a smug form of escapism. The climate breakdown, growing economic inequality, the fragility of democracy — shouldn’t those crises take center stage in these precarious times?

Beyond that, there is the now familiar charge of elitism. Who are you to tell me that your views are more valuable than mine because of the books you have read? Of course, it is obvious why the virtues of anti-intellectualism (or at least the overvaluing of the brainiacs among us) have rarely been celebrated among the bookish set. Which makes Emmanuel Carrère’s Yoga a very unusual, even revolutionary, novel. The French journalist and writer is out to lampoon overthinking, slicing and dicing the self-indulgence of intellectuals who blather on about … nothing. This line of attack is admirable but, for all its creative nerve and ingenuity, this is a story that spins in a vacuum. Watching ideas with the consistency of helium drift into the stratosphere becomes tedious once the satiric point has been made.

Our narrator, who resembles Carrère, tells us up front that this will be a book that examines meditation and yoga. It will not be an instructional guide, but a rumination on these disciplines as forms of philosophical speculation. Our narrator attends a retreat that demands a 10-day vow of silence and utter detachment from the world. He agrees — until his life begins to tear apart at the seams and he’s forced to leave. Until then, our protagonist tries to make sense of his cerebral isolation via empty abstractions — and he fails. Carrère’s mission, as a critic, is to demonstrate the overindulgence of intellectualism. The problem is that once this message comes across, kicking mindfulness to the curb over and over becomes tiresome, an arduous read. The narrator’s need to leave introduces some welcome surprise — the reader begins to empathize with the character rather than wanting him to stop thinking about thinking.

Yoga is at its most powerful when it dramatizes the patronizing assumptions of a white European intellectual who is all too comfortable appropriating cultural practices. Our narrator spends page after page explaining the meanings of different Eastern practices, smugly assuming that we believe his claim that he is an expert. Yoga’s attack on “intellectual colonialism” — whites co-opting nonwhite culture for academic capital — is effective because Carrère doesn’t underline it. It is just the way things are in the world of Western thought.

The novel’s failure as a compelling story is sealed in the second half. Once our highbrow narrator leaves his yoga retreat Carrère takes him through a succession of loopy plot turns. Whether it be an extended stay in a mental asylum, or a sudden impulse to work with refugee children, the protagonist’s adventures are misguided attempts to drum up some sort of interest in him as a personality. Worse, our pretentious narrator never realizes just how navel-gazing he is. He just continues on, trapped in his overweening self-consciousness. And so, alas, is the reader. That’s not to say that problematic characters in fiction must get their comeuppance. But Carrère’s intentions are frustratingly ambiguous here. Is Yoga sending up sterile intellectualism? Or engaging in it? Aside from its power as satire, what are we to make of a story that features such an unlikable antihero?

Still, for all of the novel’s flaws, its innovative approach is refreshing. How does one burlesque bookish solipsism? Burrowing inward and staying there until the story and the character fester is one way to go about it. Carrère’s Yoga shows us the limits of that approach.

Henry Chandonnet is a current student at Tufts University double majoring in English and Economics with a minor in Political Science. He serves as arts editor for the Tufts Daily, the preeminent campus publication. Henry’s work may also be seen in V Magazine, Film Cred, Dread Central, and Flip Screen. You can contact him at henrychandonnet@gmail.com, or follow him on Twitter @HenryChandonnet.