You are here: Home / Music / Classical Music / Opera Album Review: An Opera by a Scandalous — and Murdered — Composer Is Brought Back to Life

Alessandro Stradella’s Loving and Pretending (caa. 1676) gets a lively, precise, and characterful performance in this world-premiere recording. 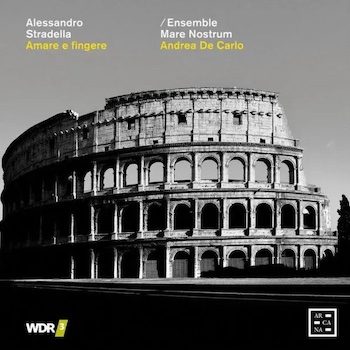 In December 2021, the Boston Early Music Festival, under the direction of Paul O’Dette and Stephen Stubbs, brought Alessandro Stradella (1643-82) to the attention of local music lovers. Their Christmas concert included two works by him, including a large-scale Christmas cantata (almost a short oratorio) for voices and chamber orchestra. A new recording has now been released of another major work by Stradella (apparently first performed around 1676): in this case, it was one that, until recently, had lain unknown and unattributed in the archives. The recording, and the opera itself, delighted me, and I’m glad to let readers know about it.

First, though, a word about the composer, a name I had heard for years, without ever having encountered much of his music.

Alessandro Stradella is a fascinating yet still incompletely known figure in music history. His adventurous life includes illicit romantic entanglements  that led to his being the victim of two assassination attempts, the first of which left him wounded, the second dead at 39. Operas and novels have been written about him; Flotow’s Stradella (1844) had a long career on the international stage. (There have been three recordings, including one on Fonè SACD 022; also one from the West German Radio, conducted by Helmut Froschauer, and, earlier, one with the renowned Helen Donath and Werner Hollweg.)

The Stradella Project (likewise from the West German Radio, in cooperation with several distinguished Italian organizations) here reaches vol. 7. I haven’t heard the previous six releases, several of which have been prominently reviewed in record magazines. But this one certainly seems worthy: a previously unknown opera performed with flair by Italian singers who are supported by an able ten-person chamber group consisting entirely of bowed and plucked strings plus harpsichord and small organ. The title, Amare e fingere, means, roughly, Loving and Pretending. Not “pretending to love,” because the characters here are generally sincere about that matter. It’s just that four of them—all of noble birth—are, most of the time, pretending to be somebody who they are not, for various strategic purposes.

This opera has recently been attributed to Stradella by Arnaldo Morelli (who wrote the booklet essay), based on research that he and Eleonora Simi Bonini have been doing for some twenty years. The evidence comes from an inventory of musical scores owned by Giovan Battista Vulpio, a singer who had close ties to Stradella. Vulpio’s score of the opera is missing, but another score with this title survives in the Vatican library (without composer attribution). The logical conclusion is that the two operas are one and the same; the composer is thus Stradella, and the libretto is mostly likely by Giovanni Filippo Apolloni, who also wrote libretti for Cesti and others.

The plot is relatively serious, with a happy ending, as was typical of so many operas of that era. Each of the four main characters, as I said, has an assumed identity throughout most of the opera, hence the two names I’ve put in the header for each. Briefly, Artabano, Prince of Persia, travels through the Arabian countryside looking for his sister Despina (abducted by marauders ten years earlier). He has adopted the name Fileno to disguise his royal identity. He falls in love with Clori, a lady-in-waiting to Oronta, queen of Arabia. Oronta has chosen to live in the countryside (with her retinue) and has taken the pseudonym Celia.

The Persian prince confides in Coraspe, heir to the throne of Egypt; Coraspe, too, is traveling under a pseudonym (Rosalbo). The problem is that Coraspe, like his Persian counterpart, loves the Arabian handmaiden Clori. The rivalry between the two men nearly leads to a bloody duel. But identities are revealed, Clori turns out to be Artabano’s long-missing sister Despina, and, since Despina is of royal blood, Coraspe can marry her. Oronta decides to return to her duties as Queen of Arabia and chooses Artabano as spouse, presumably thereby also building an alliance between Persia and Arabia. (And maybe Persia and Egypt now get along better because of Despina’s marriage to Coraspe.)

The opera moves swiftly through its many phases, revealing the characters, entangling them, then loosening the knot. The recording, a world premiere (or first modern-day performance), derives from two performances at an early-music festival in the German city of Herne (which is located near Bochum) in 2018. There are, we are told, “a few slight cuts.”

The music consists of several dozen arias and duets, plus two brief “choruses”: one in which four characters hail Queen Oronta, the other in which the two loving couples end the work declaring that sometimes, in order to find love, one has to pretend (as in the opera’s title) or even to suffer. In a recitative before that final quartet, one of the opera’s two secondary characters, Erinda, grumbles comically, and realistically: On “the lovely chessboard” of life, “some people become king, others queen, but poor Erinda will always be a pawn.”

Stradella, as an opera composer, is said to be an important link between the generation of the Cesti/Cavalli era and that of Alessandro Scarlatti (and, a bit later, Handel, Vivaldi, and Hasse). Here, his music seems to me closer to the Cesti/Cavalli era: the arias are all extremely brief (a minute or two long, and sometimes consisting of a short A and a short contrasting B, with only a tiny return of the opening at the end or none at all), and the orchestra is exclusively strings and continuo. Occasionally a character has two arias in close succession instead of exiting after the first. Yet the musical numbers do advance the plot, involve us in the characters’ dilemmas, and then help sort things out. Many arias and duets have a dancelike lilt to them that, I found, added welcome variety, helped me care about these individuals, and inclined me to anticipate a happy ending for them. (The critic for the British magazine Gramophone agreed, finding fine words of praise for the entire recording.)

The performances are highly capable, occasionally exquisite and touching. I’d never encountered any of the singers, nor the instrumental ensemble, but I took pleasure throughout my multiple listenings. Baritone Mauro Bogioni is, like many baritones these days, firm and eloquent on the top but thin on the bottom. Chiara Brunello, who plays the semi-comic male role of the tutor Silvano, succeeds in sounding masculine in a natural, unforced way. A clarification: the singer who plays the queen of Arabia is a woman, despite her possibly confusing first name: Josè-Maria. The booklet contains—in addition to Morelli’s informative essay—the libretto in Italian and good English.

This is a recording that, like the aforementioned BEMF concert (which was available for streaming for several months thereafter), may help bring Stradella back into our collective awareness as a real musical presence, not just a man about whom some startling (true) stories can be told. And, if somebody decides to make a movie about that scamp Stradella, I hope the musicians on this recording and/or the BEMF crew will get tapped to provide the musical soundtrack!

Ralph P. Locke is emeritus professor of musicology at the University of Rochester’s Eastman School of Music. Six of his articles have won the ASCAP-Deems Taylor Award for excellence in writing about music. His most recent two books are Musical Exoticism: Images and Reflections and Music and the Exotic from the Renaissance to Mozart (both Cambridge University Press). Both are now available in paperback; the second is also an e-book. Ralph Locke also contributes to American Record Guide and to the online arts-magazines New York Arts, Opera Today, and The Boston Musical Intelligencer. His articles have appeared in major scholarly journals, in Oxford Music Online (Grove Dictionary), and in the program books of major opera houses, e.g., Santa Fe (New Mexico), Wexford (Ireland), Glyndebourne, Covent Garden, and the Bavarian State Opera (Munich). The present review first appeared in American Record Guide and appears here with kind permission.