You are here: Home / Books / Book Review: “The Quiet Before”– How Our Conversations Set the Boundaries of Our Thinking

This superb book about adventures in radical thinking is less about tracking incendiary ideas to their obscure sources than about the various media used to ferment and transmit them.

The Quiet Before: On the Unexpected Origins of Radical Ideas by Gal Beckerman. Crown, 352 pages, $28.99. 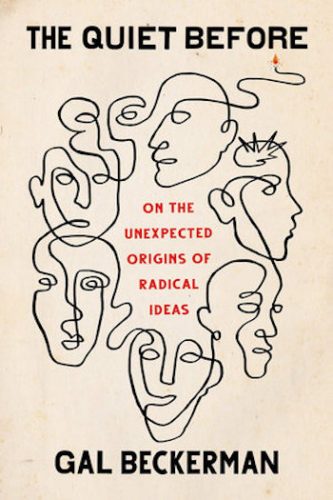 “Change,” writes Gal Beckerman,“ —  the kind that topples social norms and uproots orthodoxies — happens slowly at first. People don’t just cut off the king’s head. For years and even decades they gossip about him, imagining him naked and ridiculous, demote him from deity to fallible mortal (with a head, which can be cut).” These lines, with which Beckerman opens The Quiet Before, crystallize around something concrete (the person of the king), get right to the point, and have the ring of truth. Nor does the rest of the book disappoint. Indeed, it goes on not only to fulfill but to surpass the promise apparent from page 1.

The Quiet Before is an eccentric adventure that begins in the 17th century and takes us in hyperspace-like jumps to the present day. En route we are afforded guided tours of dramatic moments in the histories of science, politics, art, and social evolution. Although the book is subtitled On the Unexpected Origins of Radical Ideas, it seems to be less about tracking incendiary ideas to their obscure sources than about the various media used to ferment and transmit them — letters, petitions, manifestos, newspapers, Soviet samizdat (state-banned literature), zines, Internet chat rooms, email, Facebook, and social media in general. (Iffy nomenclature is probably the only complaint — if it can be called that — I have about this book, which I enjoyed from start to finish.)

“The medium we use for conversation,” Beckerman observes, “models the kinds of conversations we can have, and even sets the boundaries of our thinking.” He tips his hat to Marshal McLuhan for this insight but again and again drives home the point that new ideas need time to incubate. They need a safe house where they can be discussed and refined, where they can germinate and mature. When, for instance, Beckerman shows us around the Republic of Letters, a “network of dozens and dozens” of intellectuals “spread throughout Europe,” he comments that “The possibility of regular correspondence now allowed for collaboration, for theories to be shared and disputed. For the slow accretion of knowledge that comes from the friction of two people trading ideas and observations.”

Collaboration is another key concept. Whereas America has enshrined capitalism, along with its attendant notion of competition, and swooned over the myth of the “rugged individual,” Beckerman delves into history-altering achievements that required communities of like-minded individuals to cooperate. Nicolas-Claude Fabri de Peiresc, a citizen of the aforementioned republic, noted that “The brevity of human life does not allow that one person alone is sufficient.”

Peiresc is our first glimpse into how the collaborative process works. A 17th-century French autodidact, he never authored a book. Instead, he left “behind 100,000 pieces of paper in the form of dispatches, memoranda, and reading notes.” He sent missives to some of the greatest minds of the age, including Galileo (Peiresc was later instrumental in easing the terms of Galileo’s Church-imposed house arrest). Obsessed with calculating longitude (and with the Mediterranean Sea), Peiresc spent years orchestrating simultaneous viewings of a lunar eclipse that relied on observers as far away as Quebec and Syria. Although latitude was easily calculated, longitude required “people in at least two different locations watching some fixed phenomenon in the sky and marking precisely when each had seen it.” If he could establish longitude, he could then accurately calculate the length of the Mediterranean, still unknown in his time.

Beckerman is a gifted storyteller who, far from merely enumerating the facts involved and the challenges to be overcome, brings Peiresc to life and puts him at the center of a dynamic narrative — all the more riveting because it’s true. He zooms in on constellations of carefully selected details, composing a moving portrait of Peiresc as well as recreating the epoch he inhabited. He invites us into Peiresc’s “overstuffed study, layered in crimson rugs and somber oil paintings.” We even catch a whiff of the letters that “arrive at [Peiresc’s] town house in a constant flow … with the envelopes sometimes emanating the sickly sweet smell of vinegar, a disinfectant against the plague.” We grow attached to this intellectually insatiable man, who, surrounded by his books, “loose-leaf manuscripts,” “ancient vessels and engraved gems,” “medals and coins going back through the centuries” (17,000 of them), refused to marry because he “could not care for a wife and children and be free to follow [his] studies and patronize learned men.”

Peiresc cobbles together “a diffuse group of missionaries and merchants,” whom he trains in celestial observation (via letter, naturally), and is “thrilled at how collaborative it had all been in the end.” He “was now able to explain to the ‘very most expert mariners of Marseille …’ why for centuries the maps used to sail the eastern Mediterranean were useless.”

Beckerman repeats this note-perfect performance throughout the book, giving us a glimpse into 11 such scenarios. One of the standouts — and they’re all good — revolves around Nnamde Azikiwe, the American-educated editor of the African Morning Post, which, unable to afford a staff of professional journalists, relied on contributions from its readers. Before touting Azikiwe’s successes, Beckerman takes us backstage to show us a young man from Nigeria adrift in America, so lonely and depressed he attempts suicide.

While Beckerman relates these histories primarily through the perspective of a single protagonist, each is a flashpoint and, simultaneously, a conduit for groups, communities, or even national movements. In the case of Azikiwe, he and his vox populi–powered newspaper contested British colonial rule in Africa’s Gold Coast and charted a course for a “New Africa.” Discussing the impact of newspapers such as the African Morning Post, political scientist Benedict Anderson, quoted by Beckerman, comments: “These fellow readers, to whom they were connected through print, formed, in their secular, particular, visible invisibility, the embryo of the nationally imagined community.”

Azikiwe eventually returns to his native Nigeria, founds another newspaper, and when Nigeria declares its independence from Britain, becomes its first president. Decades earlier, perhaps not coincidentally, Azikiwe “had arrived [in America] clutching a well-worn biography of James A Garfield …” a book that “told the story of a poor boy, born in a log cabin, who had pulled himself up through education and hard work to become the twentieth president of the United States.”

In chapter 9, which takes us to New York City in 2020, Peiresc’s letters are updated to emails that circulate among a closed group of scientists and public health officials. The group comes to be known as Red Dawn, a name inspired by the schmaltzy 1984 flick about high school students fending off a Soviet invasion of America. Eva Lee, an applied mathematician, “immediately took to it. ‘We were able to talk about facts, talk about what was going on without thinking about politics …” Thanks to the Trump administration, whose bungling and outright sabotage during the Covid pandemic don’t escape Beckerman’s notice, misinformation (and its evil twin, disinformation) would prove to be as tenacious an opponent as the virus itself.

The chapter set in Soviet Russia opens in 1968, but Vladimir Putin’s authoritarian policies have ensured it’s equally relevant in 2022. Here is the story of Natalya Gorbanevskaya, a single mother who singlehandedly composes The Chronicle of Current Events, samizdat that eventually reaches an audience far beyond the borders of Russia — no mean feat in a country where the state registered “every typewriter so a keystroke could be traced back to its owner.”

Beginning as a poet, she finds herself forced into the role of coldly factual journalist by a totalitarian government that ruthlessly represses virtually every attempt at self-expression. Despite the so-called “Thaw” following Stalin’s death, the state still adhered to Stalinist principles: “We would not let our enemies have guns,” Stalin once said, “why should we let them have ideas?” Not surprisingly, by the time Gorbanevskaya begins tapping away on her Olympia — she paid “someone on the black market to alter the keys” — samizdat “was the underground method for reading the novels, short stories, poems, political essays, and memoirs that would never make it through the Soviet state censors.”

Predictably, Gorbanevskaya is arrested by the KGB, and despite being of sound mind, is committed to a psychiatric hospital. The Chronicle finds a new editor and continues to circulate until its plug is pulled during “a fierce crackdown” in the 1980s.

In the dystopian film V for Vendetta, released some two decades later, the masked protagonist asserts that “Ideas are bulletproof.” But the people who profess them are not. Nor do they need to be shot. They can be imprisoned, as was Gorbanevskaya, or exiled. Tortured into silence. Books can be burned. Printing presses and internet sites can be shut down. Hence, the need for the media that propagate ideas unpopular with the status quo to operate underground.

Even when seismic change for the better occurs, it doesn’t always last. Beckerman’s case in point is Egypt and the collapse of Hosni Mubarak’s regime, brought about primarily by Wael Ghonim and other Facebook activists. Astonishing though it is that a Facebook page calling attention to the brutal murder of a young computer programmer (at the hands of Egyptian police) could end a dictatorship, Facebook “proved useless when it came to organizing … a true opposition.” After a brief period of exhilaration and democracy, the military stepped in and Egypt wound up substituting one dictator for another.

The problem, Beckerman explains, is the nature of Silicon Valley’s electronic platforms, which “are not great for allowing radical ideas to stick, to slowly cohere.… We mistakenly believe they are the equivalent of 18th-century coffeehouses (where democracy, fueled by caffeine and newspapers, was indeed incubated). But … they only allow ideas to flare and return to darkness.”

Watchdog groups around the world have issued dire warnings about the resurgence of authoritarianism, and it’s hard to argue the point: Russia long ago ceased be a democracy. Hungary soon followed suit. Turkey’s democracy is on its deathbed. Ukraine is facing extinction as an independent nation. American democracy, once thought unassailable, is now threatened, as evidenced by January 6 and its fallout. The list goes on. All of which, unfortunately, makes The Quiet Before a timely book. More to the point, however, it’s well-crafted on every level, from its detailed research to its lucid arguments to its skillfully constructed narratives. And, as I implied above, the book itself is perhaps a bit radical with its suggestion that we ditch capitalism’s every-man-for-himself attitude and replace it with collaboration, cooperation, and community. Luckily for us, although book-burnings are back in vogue, no one’s building a bonfire out of this particular book. Yet.

Vincent Czyz is the author of Adrift in a Vanishing City, a collection of short fiction that was awarded the Eric Hoffer Award for Best in Small Press; The Christos Mosaic, a novel; The Three Veils of Ibn Oraybi, a novella; and the recently published essay collection The Secret Adventures of Order (Rain Mountain Press). He is the recipient of two fellowships from the NJ Council on the Arts, the W. Faulkner-W. Wisdom Prize for Short Fiction, and the Truman Capote Fellowship at Rutgers University. His work has appeared in many publications, including New England Review, Shenandoah, AGNI, Massachusetts Review, Georgetown Review, Tin House, Tampa Review, Boston Review, and Copper Nickel.