You are here: Home / Books / Book Review: The Lost Southern Chefs — A History of the Commercialization of Southern Hospitality

For all of the book’s fascinating revelations, The Lost Southern Chefs leaves the reader with a number of unanswered questions.

The Lost Southern Chefs: A History of Commercial Dining in the Nineteenth-Century South by Robert F. Moss.  University of Georgia Press, 304 pages, $27.95 (paperback). 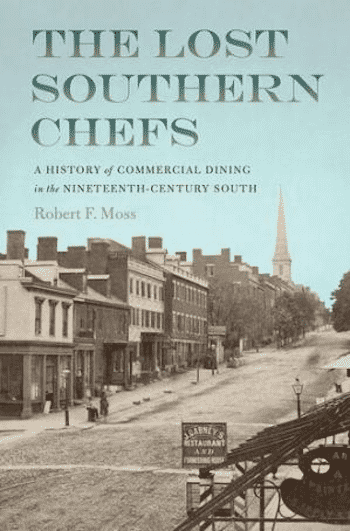 Southern food is getting a lot more respect these days. Over the years critics condemned it as unhealthy, in extreme cases dismissing the cuisine as little more than plantation slop. It has, often unfairly, been seen as a sign of the region’s culture’s spiritual depravity and disdain for progress. The “Southern” components of globalized American brands have also been received with the same patronizing skepticism.

The upshot is that this ‘food for the soul’ has been condemned rather than understood as the product of historical forces that have shaped the region, a revelatory link between past and present. Incidents such as the pellagra epidemic in the American South in the early 1900s were seen at the time as evidence of genetic or behavioral inferiority rather than a matter of dietary deficiency. Even today, some still blame dietary ignorance when the real culprit was a post-Civil War sharecropping economy that compelled people to grow profitable cotton rather than healthy sustenance.

Even as late as 2015, an article in the American Heart Association concluded that a greater risk of coronary heart disease accompanied “a dietary pattern characteristic of the southern United States.” This warning was circulated in the media without anyone bothering to note the impact on the region of agribusiness and economic disparities. Still, even if you discard the prejudices of researchers, it is hard to deny how commercialization, industrialization, and globalization of foodstuffs have taken a powerful toll on the South’s cuisine.  Documentaries such as Netflix’s High on the Hog are spotlighting the African origins of Southern food. But we also need books like Robert F. Moss’  The Lost Southern Chefs, part of an effort to explore how the South has been an active player in marketing its own cuisine.

Local brand loyalty in the South runs almost as deep as the populace’s loyalty to grits. Good luck running a supermarket in North Carolina without Duke’s mayonnaise or Cheerwine! Note how many of today’s global brands have Southern origins: Coca-cola, Pepsi, KFC. The Lost Southern Chefs begins its chronicle of branding before the Civil War, in the early days of the evolution of America’s national food industry. Starting here contributes to our undernourished understanding of Southern cuisine in a number of ways. First of all, it shows that early on commercial kitchens  throughout the region were concerned with providing fine dining experiences that sought to combine local flair with national/international appeal. Next, it proves that all the peoples in the South (including Black, immigrant, and others) were instrumental in shaping what was seen as a ‘dignified’ regional menu, both as artists and as entrepreneurs. Finally, it raises unanswered questions about the twists and turns that led to the region’s food being so maligned, particularly via its commercial iterations.

Focusing on New Orleans, Richmond, Charleston, and Washington D.C. – the principal urban markets in the South at the time – Moss finds that early examples of “foodie” hospitality interlaced a number of distinct national trends. Colonial favorites such as turtle soup were initially enjoyed all along the eastern seaboard. Oyster cellars in Charleston, stocked with local mollusks, were eventually enlisted to compete with their famous New York counterparts. Early movers and shakers included George T. Downing, an abolitionist, restaurateur, and oyster seller born to free persons of color who relocated from Virginia to New York. Establishing himself in Washington at the end of the Civil War, Downing managed the House of Representatives Refectory for twelve years. John Dabney of Richmond began his career in the food industry while he was still a slave. Famously, he served a mint julep to the Prince of Wales. As a marketing ploy, Dabney would treat “the editors of the Richmond papers to the occasional tray of turtle soup and mint juleps.” Meanwhile westward expansion brought wild game back east via rail, turning New York into “the central hub of a national game trade.” But much of this meat from the western prairies found its way via steam packet service to Charleston.

Moss provides a number of examples of highbrow restaurants that “evolved within the context of a slaveholding society.” There were eateries in the South that rivaled New York’s Delmonico’s in terms of their sophisticated palate, pomp, and prestige. Many of the skilled workers employed by these high tone institutions were slaves, but they were not lifted haphazardly “from rice and cotton plantations out in the countryside.” Many of these talents were brought into the establishments because of their unique culinary genius.  Moss writes that 10% of enslaved Virginians were hired out in 1860, a clear sign that their skilled labor was valued. Here is his cliche-defying conclusion:

Contrary to myths that would be promulgated in later depictions of antebellum southern cuisine, the driving force behind southern restaurants wasn’t ‘old mammies’ who cooked by mystical instinct under the tutelage of white mistresses. That cuisine instead was created by a remarkable cast of talented and determined men and women who navigated a complex web of social conventions and legal restrictions to achieve commercial success as professional cooks and caterers. Some even got rich doing it.

The historical impasse occurred with the collision of the traditional and the commercially viable. While “the African influence is undeniable in the world of southern home cookery,” Moss notes that, “the flavors and techniques of African foodways do not appear prominently in the commercial cuisine of the era.” And that is ironic “considering the large number of African American southerners who made their livings as professional cooks and caterers.” Whether their clientele were cotton company stockholders or the representatives of “mechanics” (poor white urban laborers), such as the Hibernian Society of Charleston, the ideal Southern dining experience was never intended to replicate the ‘wrong kinds’ of folkways. Turtle soup, canvasback duck, and barbecued squirrel were on the menu alongside French pâtés, blancmange, and ice cream. Okra and peanuts (African contributions), however, were not.

Regarding European influences on Southern cuisine, Moss departs from accepted wisdom. While Charleston’s Huguenot past (dating back to the 1680s) is often credited with adding a French accent to its food, the food historian argues that early 19th-century French immigrants, such as Rémy Mignot, played a much more important role. Mignot came to South Carolina following the Bourbon Restoration and married the daughter of a baron who first fled the French and then the Haitian Revolution. Such French exiles, with their anti-monarchist and pro-slavery sentiments, found a ready home in the South, and they brought their coffee houses and confectionaries with them.

The influence of later European immigrants was important in New Orleans, where “the city’s premier practitioners of haute cuisine did not hail from old French families who had been in New Orleans for decades, which is to say they were not Louisiana Creoles. Instead they came from the ranks of new arrivals, some of them recent immigrants from Europe, others migrants from different parts of the United States, especially the Eastern Seaboard.” Analogous to the lack of African representation in commercial dining enterprises, “these newcomers established a restaurant cuisine that wasn’t particularly Creole.” For example the fare in New Orleans restaurants in the 1840s included “no red beans and rice, no poor boys,” and no “soufflé potatoes and crawfish étouffée.” The late 1840s saw a large influx of European immigrants amid “a wave of revolutions [which] destabilized Europe amid rising nationalism and a pent-up demand for democratic reforms.” It may have suited the recent arrivals to cloak their innovations in the guise of regional tradition. The Crescent City’s Antoine’s bills itself as “the only antebellum restaurant in the South that is still in operation today,” claiming (dubiously) that it was founded in 1840. Its founder, Antoine Alciator, most likely arrived in New Orleans in the 1850s

So, how does “Southern hospitality” fit into this revised history? It may be that the commercial potential of this regional trait was recognized early on in the habits of the budding foodservice industry’s clientele. Moss refers to a passage by the visiting English novelist Anthony Trollope in his  book North America: “Southern senators and government officials, he observed, had been more prone to hospitality than their northern brethren and more likely to spend lavishly while in the city.” Perhaps it is this economic joie de vivre — not expressed in terms of a service or a commodity to trade, but as one’s willingness to partake and share — that constitutes the famous hallmark of the South.

For all of Moss’s revelations, The Lost Southern Chefs leaves the reader with a number of unanswered questions. What are we to make of how readily the South commercialized its own foodways, particularly the eager involvement of Black Southerners? What are we to make of the fact that new arrivals reinvented tradition while simultaneously sidelining what was genuinely traditional? While the book discredits idyllic images, let’s be careful that it does not implant others. There should be more than just the historical pedigree of regional fine dining here. The investigations, running from colonial times to Reconstruction, must continue, particularly examinations of the commercialization of “home cookery.” The map of eateries examined should be expanded to include the predecessors of rib shacks and soda fountains, of Bojangles and Biscuitville. The whole cast of characters in regional gastronomy that has gone global — Moon Pies, pralines, pimento cheese — should be analyzed. Over the past two centuries, the South has simultaneously protected its foodways, allowed them to be exploited, and innovated and adapted them to changing conditions. One market force demands a certain South from us (and complains when we fail to deliver), another decides what is available to us (which today is often affordable yet over-processed junk). Somewhere between these sites of contention sit plates of delicious ‘food for the soul.’