Put bluntly, Mathematics for Human Flourishing is quite possibly the most profound meditation on mathematics I have read. 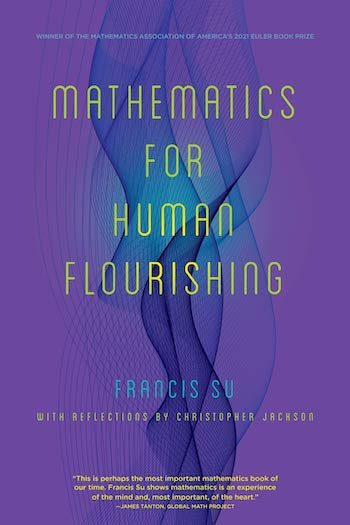 When Francis Su finished delivering his retiring address as president of the Mathematical Association of America (MAA), a stirred audience at the January 2017 Joint Mathematics Meetings stood and gave him a hearty ovation. Some even wept. Farewell speeches are often touching, but most are relegated to oblivion. Word of Su’s talk, however, spread like wildfire. Quanta Magazine published an interview with Su the following month and it was reprinted in Wired. As requests for additional discussion came in and enthusiastic letters from mathematically disenchanted readers arrived, Su expanded his talk into a book named after his address: Mathematics for Human Flourishing. Yale University Press published a hardcover edition in 2020, and a paperback version was released earlier this year. Accolades now include the 2021 Euler Prize, which honors a book that contributes positively to the public’s view of mathematics. A copy of the text fell into my hands only recently: it demanded to be reviewed.

Critiques of books about mathematics are rare on the Arts Fuse — or in general. This is partly because readers tend to envision mathematics as being no more than a monotonous set of procedures for doing calculations. Indeed, the layman’s experience of math conjures up tortuous images of formulas scribbled on blackboards. Some individuals excel at mathematical tasks, while others are scarred by their befuddling opaqueness. Su is keenly aware of this powerful prejudice, and he regrets that “outdated curriculua and pedagogies prevent many students from experiencing math as a fascinating area of exploration, culturally relevant and important in all spheres of life.” He is also cognizant of the tragic disconnect between the vocational utility of mathematics and its lackluster resonance: “We all know that there’s math under the hood, but otherwise math seems cold, logical, and lifeless. No wonder we don’t see a personal connection to it.” Part of Su’s goal in this book is to overturn this demeaning public caricature.

Su contends that, at its core, practicing mathematics cultivates virtues, or excellence of character and conduct. Such virtues help people thrive as individuals and members of society. Flourishing, therefore, concerns “a wholeness — of being and doing, of realizing one’s potential and helping others do the same, of acting with honor and treating others with dignity, of living with integrity even in challenging circumstances.” Math contributes to what the ancient Greeks called eudaimonia — a well-lived life. From the second chapter onward, each major section of Su’s book bears a one-word title — “exploration,” “meaning,” “persistence,” “love,” and so forth — referring to a specific human desire that mathematics fulfills. Each of the first 12 chapters also contains a provocative mathematical question for readers to ponder. (Hints as well as solutions are provided at the book’s end.) Su’s conundrums require no formal training, but they challenge lay readers to use mathematical thinking to solve curious problems.

Written with clarity for a broad audience, Mathematics for Human Flourishing has two main objectives. The book’s early chapters address the elemental question — “Why do math?” Exploring new problems, making abstractions, and ideating elegant solutions, a mathematician savors the struggle of uncovering complex truths about the world. Such truths, or theorems, are like rungs on a timeless ladder that one can climb, build from, and revisit. By envisioning mathematics as an intense quest, Su underlines what stimulates mathematical investigation — both recreationally and professionally. More powerfully, Su believes that rigorous mathematical thought serves as a rudder that will help steer us through the turbid waters of modern American life. Lamenting the rise of a world overcome by demagoguery and factionalism, Su fears that “[p]eople are endorsing blatant falsehoods that comport with their world view rather than accepting complicated truths. We live in filter bubbles that reflect our own biases back at us.” Incisive mathematical reasoning is one way that we can combat falling victim to inequity and false idols: “But a society that does not encourage critical thinking is easily swayed by propaganda and misinformation from actors who have gained the appearance of authority by other [illegitimate] means.”

The book’s latter half highlights the value of community. For Su, a mathematician’s mission is progressive at its core: a belief in promise over progress, a faith in the grace of humility, in empowering women, in educating nontraditional students, and in providing opportunities for the disadvantaged. A culture that “does not structure its social practices to promote internal goods has no anchors.” And math enhances bonding because it reflects the “love one might have for another human being through and because of mathematics” (author’s emphasis).

As a refrain, Su quotes the French philosopher Simone Weil (1909-43), sister of the renowned mathematician André Weil (1906-98): “Every being cries out silently to be read differently.” Unable to keep pace with her gifted brother, Simone yearned to be accepted as a mathematician based on her circumstances and background. Likewise, the book concretely explores how diverse struggles of today’s math students can be looked at differently — with humanity and understanding. Vignettes, positive and negative, serve as case studies. We learn of Akemi, a promising student who left her doctoral program in mathematics after being rebuffed by her misogynistic adviser and teaching assistant. There’s also Ricardo Gutierrez, a mathematically able son of working-class immigrants in New York who lacked proper mentorship as a child: after 19 years of successful employment as an audio engineer, he returned to school at age 40 to pursue a mathematics and computer science degree. Josh Wilkerson is a high school math instructor who engages his AP Statistics students in a service project with a homeless ministry in Austin, TX. His students not only undertake survey research and analyze data, but also read about vagabondage and interview formerly homeless residents. Such accounts contextualize the reach of mathematics, but also remind readers that there’s still a ways to go when it comes to enabling teamwork and encouraging inclusivity.

Mathematics for Human Flourishing adroitly bridges two distinct strands of writing about math. One branch critiques math education in primary and secondary schools. Most ironic is Paul Lockhart’s A Mathematician’s Lament, a humorous diatribe in which the research-mathematician-turned-high-school-teacher likens math pedagogy to painting-by-numbers and bungled music training. Creativity is limited and rote exercises are omnipresent, a situation Lockhart compares to “rearranging deck chairs on the Titanic.” The ship is sinking for Lockhart, but others are trying to plug leaks. Education specialists and psychologists have come up with a spate of books that vigorously debate today’s teaching methods and parenting techniques. There are also serious looks at dependence on a “growth mindset” that is deemed important for quantitative mastery.

The other genre emphasizes the beauty of mathematics and the thinking it demands. Jordan Ellenberg and Steven Strogatz are among its most visible proselytizers. The former’s best-known book, How to Not Be Wrong: The Power of Mathematical Thinking, shows how mathematical reasoning can help people succeed in everyday life, such as winning at Powerball or improving dating prospects. Strogatz’s best-selling texts find ways to enliven math concepts for curious lay audiences, patiently explaining key ideas in algebra, geometry, and calculus. In addition to these mainstream books, both authors publish regularly in journalistic outlets, serving as friendly ambassadors for the realms of mathematical research.

What makes Su’s book so compelling is that it dares to go in a personal direction. Readers may be surprised to find that Su — an endowed professor at Harvey Mudd College and the first person of color to preside over the MAA — has had his share of struggles. While a doctoral student at Harvard University, he was told by a math professor, “You don’t have what it takes to be a successful mathematician” (author’s emphasis). Unlike others in his graduate cohort, Su arrived at Harvard without prior graduate coursework or an Ivy League baccalaureate degree. Su’s own gumption, together with the support of a gracious dissertation adviser (Persi Diaconis), enabled him to graduate.

Racial issues raised additional problems. Growing up as a Chinese American in a modest white and Latino Texas community — at one point learning that he was adopted — Su grappled with his identity: “I was embarrassed to be Asian so I tried to act white even if I didn’t look white,” he remarks. In addition, he did not fit into the Chinese community because he neither spoke the language nor acted Chinese. In fact, Su suggests that it was not until later in life he found a home: “The first time I didn’t feel like a minority was when I moved to California.” Since his arrival on the West Coast, Su has helped youth of color by guiding undergraduate research for underrepresented minorities in Berkeley’s summer Mathematical Sciences Research Institute – Undergraduate Program (MSRI-UP) and reading to African American and Latino children living in impoverished Los Angeles neighborhoods.

The book’s most poignant sections concern the author’s blossoming friendship with Christopher Jackson, an African American incarcerated for a series of armed robberies he committed at the age of 19 while addicted to hard drugs. Writing to Su in 2013 from a United States Penitentiary in Pine Knot, KY, Christopher had learned of Harvey Mudd College through books and television. Christopher had a peculiar proclivity for mathematics and longed to obtain a degree by correspondence. Curious to know more (and perhaps propelled by his Christian faith), Su responded, thus setting in motion an inspiring epistolary dialogue. As they follow Christopher’s letters — one of which is published at the conclusion of each chapter — readers see him advance from mastering high school topics to learning linear algebra and point-set topology. Su diligently mentors Christopher through every step, posing challenging questions while also asking him to reflect on his mathematical experiences. Christopher eventually becomes a tutor himself, helping 12 fellow inmates obtain GED credentials; he hopes to one day teach mathematics professionally. (The earliest date Christopher can be released from prison is 2033.) In 2018 the two men finally met at a prison facility. Su is giving a portion of the book’s royalties to Christopher for his contributions to the text — proof that anyone anywhere can flourish by taking up mathematics.

By portraying mathematics as creative and value-laden, Su powerfully argues that its pursuit is vital for our growth as human beings. Math is an elemental part of a thriving culture because “a society without mathematical affection is like a city without concerts, parks, or museums. To to miss out on mathematics is to live without an opportunity to play with beautiful ideas and see the world in a new light.” Of course, idealizing math is not new: it reaches back to venerable traditions in classical and medieval Western education, which insisted that mathematical endeavors were not only about generating knowledge but also building character. Historically, women were restricted from this process, but Su demands that contemporary forays into mathematical thinking be made available to all.

Put bluntly, Mathematics for Human Flourishing is quite possibly the most profound meditation on mathematics I have read. The volume not only invited me to savor my past mathematical experiences, but also challenged me to become a more generous person. I hope the book, now available in paperback,  will continue to inspire others with its vibrant and inclusive conception of mathematics.