Penny, whose many moods are sensitively drawn in this softly colored volume, is, perhaps like all cats, a philosopher. 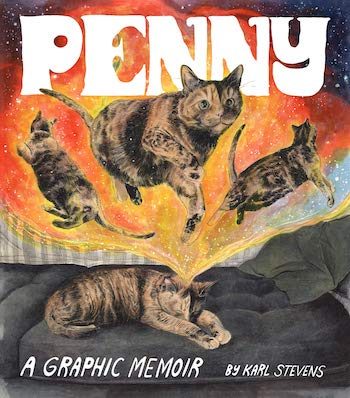 Oh, for the life of Penny. A dreamer with plenty of real-world experience to draw on, the tortoiseshell cat is the heroine of her own story — and now, wonderfully, a graphic memoir, Penny, expertly interpreted by Karl Stevens.

Stevens is not only Penny’s amanuensis, of course. But fans who are only familiar with the Boston-based artist from his lauded 2019 Isabella Stewart Gardner exhibit, a retelling/extension of “The Story of Lucretia,” by Sandro Botticelli, may not know his full history of feline art. Penny, which debuted in the Village Voice, picks up where the Pope Cat character, in his Failure series (serialized in the Boston Phoenix and one of Stevens’s four previous graphic novels) left off, but it also shares a sensibility with that Gardner installation.

Both showcase the same speculative imagination, although the imagined dream-state consciousness of a house cat differs somewhat from that of the historical Lucretia, or even the somewhat feline Mrs. Gardner. And both deal more with the grand than the mundane, with no apology made for size. Mrs. G. might have pondered her legacy as she considered becoming the first American collector to acquire a Botticelli. Penny, however, has loftier thoughts. “Am I not the center of the universe?” she muses. “I’m a total post-modernist.”

Penny, whose many moods are sensitively drawn in this softly colored volume, is, perhaps like all cats, a philosopher. In the more introspective of the varied frames, cat art aficionados will note some parallels with Henri, le Chat Noir, the philosopher cat who starred in a series of William Bradenton short films — the “noir” of the tuxedo cat’s title referring to his worldview rather than his bicolor coat. Like Henri, Penny laments the “ghosts from the past performing their tired biographies of regret, failure, and fear” at one point, commenting at another, “If I weren’t such a bourgeois, I would totally stage a hunger strike.”

But what these drawings reveal is that Penny’s life extends beyond the mind, as she enjoys all the feline comforts cat lovers will recognize, from occupying empty boxes to sitting on paper. It’s a full life, and one convincingly imagined by Stevens, from Penny’s relationship with her toys — individuals with agency, to the cat — to her conflicted feelings about her domesticated situation. This is given context by memories of her earliest youth as a street cat, and in one harrowing sequence, Penny escapes Stevens’s apartment, reviving some of that trauma before her eventual rescue.

What sets Penny apart from the cat crowd is Stevens’s skill at depicting her. A bit snub-nosed, like an English shorthair, Penny is shown in both her most graceful and most endearingly awkward poses, always identifiably feline and yet with an obvious intelligence and focus that makes her most lofty thoughts credible. It’s this clear-eyed love and attention that makes Penny stand out, revealing, as great authors do, that even the smallest life may be full of interest — and profound.

Clea Simon is the author of the “witch cats of Cambridge” cozy mysteries, the most recent of which is A Cat on the Case. She can be reached at www.CleaSimon.com