You are here: Home / Books / Book Review: “The Search for John Lennon” — Going Down the Wrong Road

In her search for John Lennon, the author follows her fancy and picks and chooses which rocks she wants to look under, all the while giving herself the space to wax poetic on whatever theme moves her. It’s an appealing approach. Too bad, then, that the book is a letdown.

The Search for John Lennon: The Life, Loves, and Death of a Rock Star by Lesley-Ann Jones. Pegasus Books, 352 pages. 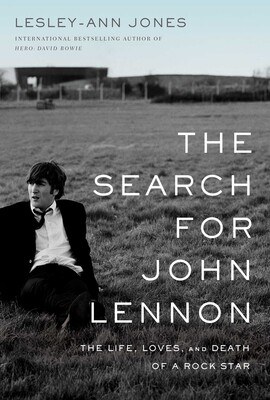 In the introductory chapter of The Search for John Lennon: The Life, Loves, and Death of a Rock Star, Lesley-Ann Jones writes, “I didn’t fancy writing yet another conventional biography of John. This is not that. This is a roam of my own through John’s lives, loves and deaths in honour of his big Forty-Eighty. It is a kaleidoscope, a musing, a reflection: who was he, anyway?”

The “Forty-Eighty” is a reference to the number of years it’s been since the Beatle was murdered, and how old he’d be were he still alive. It’s as good an excuse as any to revisit Lennon’s life, and Jones’s decision to explore outside the confines of a “conventional biography” intrigues. Not that The Search for John Lennon, which was published in December 2020, is all that unconventional. The book is essentially a chronological journey through the life of John Lennon. But it’s definitely not a standard biography, bound by duty to cover every last known detail of its subject’s story in a dispassionate manner. Instead, Jones follows her fancy and picks and chooses which rocks she wants to look under, all the while giving herself the space to wax poetic on whatever theme moves her. It’s an appealing approach. Too bad, then, that the book is ultimately a letdown.

Before I elaborate, some credit is due. To restate what I’ve quoted above, Jones herself writes that the main question she’s trying to answer in The Search for John Lennon is: who was John Lennon, anyway?

You know…that John Lennon. Only one of the most consequential figures of the 20th century, whose influence continues to extend into the 2000s.

What a task. Jones had to know she’d never answer that one completely, and she attempted to anyway. That alone gets a tip of the cap. More importantly, I can honestly say that, after reading The Search for John Lennon, I am thinking about John in new ways. It’s not like I don’t already have a shelf full of books on Lennon and the Beatles, but Jones has given me fresh takes to kick around.

To give one example, consider her focus on the strong women in John’s life, and the role they played in shaping the man he would become.

“To me,” Jones writes in the book’s introduction, “he reveals himself most plausibly and reliably through the formidable females in his four-decade life, regardless of whether they cherished or neglected, repaired or damaged, fortified or weakened him.”

After reading that line for the first time, I had something of a eureka moment. Of course you have to focus on the women in Lennon’s life to truly understand the man. Even pointing this out here feels silly, because it now seems so obvious. But it wasn’t obvious, at least not to me, until Jones stated it so clearly.

So what’s the problem with The Search for John Lennon? Based on the above, it seems to have a lot going for it. Which it does. And yet there were so many moments in the text that left me scratching my head and wondering, “Are we sure this isn’t just a first draft? Is this really how Jones meant to write it?” Jones didn’t want to produce “yet another conventional biography of John.” But does that mean she had to abandon writing well altogether, or decide it was acceptable to basically wing it when it came time to gather her sources?

Take her exploration of John’s psychology, which is a recurring theme in The Search for John Lennon. Her main source on the subject is the psychotherapist Richard Hughes, who describes Lennon to Jones as being “narcissistically wounded.”

“Describing someone as ‘narcissistically wounded’ is not a diagnosis,” Hughes elaborates. “It is more a ‘character style,’ which is not a pathological term but one used by psychotherapists and psychiatrists to explore character from a developmental and relational perspective. It is important to remember that we are all a bit borderline, that we are all a bit narcissistically wounded.”

On the one-hand, I find all this fascinating. And I think John himself would find it fascinating. His greatest solo effort after all, 1970’s Plastic Ono Band, was a musical reflection of his experience undergoing primal scream therapy.

On the other hand, is this really the way to go about exploring the psychology of one of the most important artists of the 20th century? By using as your source someone who — best I can tell — is a random psychotherapist who picked up the phone when you called? All due respect to Dr. Hughes, who truly does seem to be an intelligent guy, but like, who is he? What makes him special? Perhaps I’m wrong here, and Jones has found the absolute best authority she could have for this topic. Still, even if that’s true, surely there are other learned people she could talk to on the subject. Why not talk to a number of experts? Why not dive into academic journal articles on the subject and cite those findings? As it is, “psychotherapist Richard Hughes” pops up from time to time in The Search for John Lennon, giving his take on John. It’s almost always an interesting perspective. Still, he’s just one voice. Can I have others?

I can make an almost exact complaint about Jones’s (brief) examination of Lennon’s “More popular than Jesus” quote. To discuss this incredibly infamous moment in the Beatle’s life, and try to shed some light on Lennon’s views on religion, Jones turns to the Reverend Canon Doctor Alison Joyce, who happens to lead the church the author attends. As with Hughes, I’m sure Reverend Joyce is very accomplished in her field. Why, exactly, is she a source in a book about John Lennon, though? Simply because the author knows her? Were no other religious authorities available? Did Jones bother to try to find any?

Even when Jones’s sources make sensible observations, the results are often amateurish. Near the end of the book, for instance, she interviews the guitarist Earl Slick. Best known for his work with David Bowie, Slick played on the sessions for Lennon’s 1980 album Double Fantasy. As such, it makes perfect sense that Jones would talk to him about the making of the album. But Slick is the only participant in the sessions Jones bothered to quote on this subject. On top of that, there is an additional annoyance: the brief four pages where Slick speaks his piece turns out to be a four-page-long monologue. His long quotes are occasionally broken up by lines like, “Does he [Slick] remember his first-ever studio encounter with John?” and “Did they [Lennon and Slick] ever get a chance to sit down and compare notes about their lives?” Shit, if you want to do a Q&A, do a Q&A. But this is embarrassingly awful writing.

Jones applies the same strategy to the long, long, long barely interrupted quotes from John’s first wife, Cynthia, as well as one of his closest friends, the bassist Klaus Voormann. These are acceptable sources, and it’s a legitimate scoop that Jones arranged original interviews with them (the Cynthia quotes come from 1989, when she and Jones were working together on an abandoned book project). But again, it’s as if Jones simply turned on the tape recorder and said, “My job is done here.” Didn’t she have any color to add? Any context? Anything that might add to what her sources were telling her? Is Jones a writer, or a transcriber?

Of course I know the answer to that question, which makes it all the more frustrating that I felt the need to ask it. Jones is clearly a thoughtful journalist. Her 28-page introduction to The Search for John Lennon ranks among the best pieces of Lennon writing I’ve ever read. Unlike most of the book, those pages sing. Jones’s voice is clear and confident as she bounces from personal reflection to reporting and incisive analysis and back again. That’s a high bar to sustain over the course of an entire book, and I’m not convinced Jones even tried. If only she had.

I was so let down by The Search for John Lennon because the potential for a great book was there. I liked the unconventional approach. I liked the difficulty of attempting to answer a question as impossible as: who was John Lennon, anyway? But ambition doesn’t excuse the fact that Jones’s execution is so poor. Maybe someday someone will come along and write the book that answers all the big Lennon questions. That “finds” the real John. Unfortunately, Jones’s book is not that book. The search goes on.