To his credit, Kawaguchi is a canny enough craftsman to give the time-tripping cliché a healthy spin.

Before the Coffee Gets Cold by Toshikazu Kawaguchi. Translated from the Japanese by Geoffrey Trousselot. Hanover Square Press, 272 pages, $20.99. 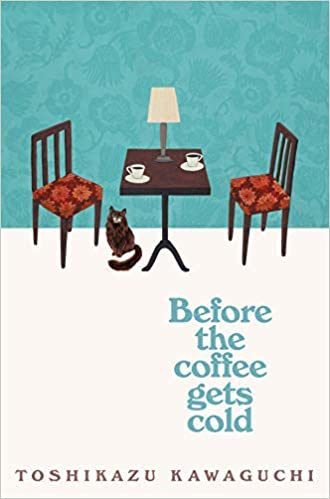 Reading Toshikazu Kawaguchi’s novel — set in a magical basement shop on a narrow Tokyo lane where one orders a cup of coffee and is transported back in time — I remembered my visit to Tokyo some years ago. I, too, wandered down a labyrinthine alley like the one described in Kawaguchi’s book. My ramble, in the Roppongi district, was an attempt to lose my jet lag. I passed numerous rabuho (love hotels) and broom closet–sized stalls where everything from live crickets and ducklings to knockoff Rolexes were sold. Mesmerized, I could have been mistaken for one of the starry-eyed characters in search of a human connection that populate Kawaguchi’s novel.

Kawaguchi, at the age of 49, is best known in Japan for his plays and collaborations with a theater troupe called Sonic Snail. This is his first novel, and understandably it draws on his dramatic skills. The magical coffee shop, with its shabby interior, serves as a stage through which his characters must pass into another dimension. The larger world enters only when we learn their backstories.

Of course, Kawaguchi is not the first writer to enable time tripping by way of some sort of phantasmagorical vehicle. Turn back the dial of the Wayback Machine to the year 1895 (you remember that contraption from the animated cartoon Rocky and Bulwinkle show, don’t you?). H.G. Wells first developed the theme in his novel/socialist polemic The Time Machine. Like the knockoff Rolexes I saw being hawked in Roppongi, Kawaguchi stands on the shoulders of numerous scribblers who have exploited Wells’s scenerio in stage plays, radio programs, comic books, and in popular films like Timecop, starring the “Muscles from Brussels” kickboxer Jean-Claude Van Damme. (Oh, and let’s not forget that successful film franchise the Back to the Future trilogy, starring Michael J. Fox.)

So how does Kawaguchi differ from the others? Does he get away with recycling a hackneyed literary (and cinematic) gimmick? To his credit, Kawaguchi is a canny enough craftsman to give the cliché a healthy spin. Early on, he acknowledges the legions of writers who have pilfered Wells’s original theme — and assures readers that his variation on a theme will be different.

That’s quite a sales pitch. Yet he pulls it off by cleverly weaving fantastic strands into what turns out to be an entertaining tale. He convinces us that there’s a rumor floating about Tokyo, attributed to sensational stories that have appeared in the tabloids, concerning the existence of a magical café. It’s an “urban legend,” he tells us. But no one seems to know exactly where it’s located. If you should stumble upon it, it will appear, at first blush, to be a normal place of business, like the numerous stalls I encountered in the Roppongi district. If you linger longer, you might notice the abnormalities (strange clientele that lurk for what seem to be hours, weird comings and goings, backroom whispering). But chances are you might also find these happenings commonplace. It turns out that you have to engage the gatekeeper, a waitress named Kazu Tokita. Make it past her scrutiny and you are invited to partake in the specialité de la maison, namely time travel — but there are rules you must follow. (I won’t spoil the plot by giving all the rules away except to say that when one agrees to time-travel via this café portal, one cannot expect to return to alter the present outcome of one’s life at all).

Being a clever dramatist, Kawaguchi builds suspense from scene to scene, carefully selecting his narrative clues. He punctuates his story with sonic cues: his characters’ entrances and exits are marked via a  bell that rings when the door of the magical coffee shop is opened: “Clang-dong.” And he draws on a a rich Japanese theater tradition (read: kabuki) by including supernatural spirits, ghoulish ghosts who are trapped between the physical and spirit worlds (and who, comically, get up from the table every now and again to use the bathroom).

Once you grant Kawaguchi the necessary suspension of disbelief, the story moves along fairly well. Though there are occasional potholes because of Geoffrey Trousselo’s awkward translation. For instance, when the author introduces the character Fumiko, she is described “like a model from a fashion magazine…a beautiful woman who would draw anyone’s gaze…who combined intelligence and beauty.” Groan. Lugubrious descriptive sentences like this – which in the original Japanese might emit more nuance or sophistication — are found peppered throughout the prose. (An alternative would be to reprint the original Japanese word or phrase and then refer the reader to a glossary at the end of the book.)

Unlike H.G. Wells, who used the futuristic context of The Time Machine to explore the horrific disparities between the haves and have-nots of Industrial England, Before the Coffee Gets Cold doesn’t examine social or cultural complexities. It provides scant political pizazz. Rather, the book is a deep dive into melodrama, revolving around characters who long to reconnect to others for a second chance, to make amends, to rekindle passion. We are all victims of that poignant yearning to rewrite history. But, as Ray Bradbury suggests in his classic short story “A Sound of Thunder,” even a tiny change — such as squashing a bug — might change the course of history for the worse. Kawaguchi shuts down that tragicomic possibility.

A footnote: Originally published in Japan in 2015, Before the Coffee Gets Cold was noticed by the movies: in 2018 Ayuko Tsukahara directed a film version. Who knows? Maybe the book, if successful over here, will inspire a Netflix series?