You are here: Home / Books / Book Review: “Glitter Up the Dark” — Music and Our Understanding of Gender Identity

Sasha Geffen takes on some heady ideas about music and gender performance, but they approach the subject with a nimble writing style.

Glitter Up the Dark: How Pop Music Broke the Binary by Sasha Geffen. University of Texas Press, 264 pages, $18.95. 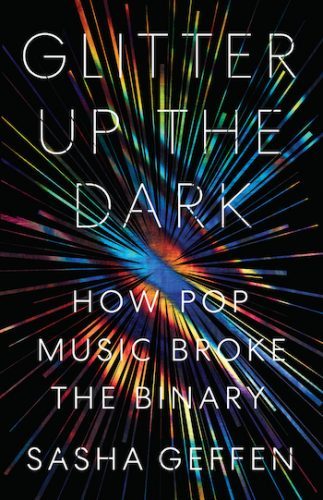 Listing your pronouns in your social media bio and seeing pictures of AMAB people wearing elaborate eyeshadow and nail polish has become commonplace — boringly familiar for those scrolling through Twitter while shockingly new to many in the world at large. Of course, pop culture has already been there, particularly among musicians, bands, and their fans. Sasha Geffen brings readers up to speed with Glitter Up the Dark, a chronicle of how music and its attendant media has depicted and pushed for more inclusive gender expression.

The book is arranged in loose chronological order, starting with Elvis and The Beatles and ending with contemporary artists like Perfume Genius, Sophie, and Janelle Monae. Those who were born long after Beatlemania and first heard the Fab Four on classic rock radio will be especially interested in how The Beatles challenged the mid-century idea of what men could look like. Geffen pays particular attention to how the band’s gay manager, Brian Epstein, shaped band’s appearance, examining the significance of The Beatles’ longer hair, stage presence, and joking banter, all of which challenged conventional models of masculinity. “By curating the band’s aesthetic, Epstein primed teenage girls to see The Beatles the way a gay man would see them,” Geffen observes.

Other chapters weave together ideas that have been part of the discourse inspired by artists who experiment with gender, drawing on academic sources and Geffen’s commentary to explore how those artists used music or media (such as videos) to play with their gender identity. In the wake of Prince’s death, many trans and non-binary fans adopted the opening lines of his single “I Would Die 4U” as a rallying cry. Geffen (who is non-binary and uses they/them pronouns) deftly analyzes Prince’s gender performance, pointing to his petite, doe-eyed appearance, his use of the falsetto voice, the gender play in songs like “I Wanna Be Your Lover,” and the multi-gendered makeup of his backup band The Revolution.

Geffen looks inside artists, and inside listeners, to see music as “an inherently a sensual exchange. Music enters the ear, causes pleasure, and inspires identification in the listener, who is not merely a passive participant in the encounter.” Their draws on descriptions of artists’ voices to highlight different modes of gender performance, from the only known recordings of castrati to the “grainy” quality of women’s music artists like Cris Williamson and Tracy Chapman. By evaluating the role of synthesizers and electronic vocal manipulation, Geffen also points out that anatomy and biology don’t have to be destiny: technology plays an important role in gender performance.

Glitter Up the Dark is intended as the start, rather than the end point, for an investigation of the gender spectrum in music.  Geffen takes on some heady ideas about music and gender performance, but they approach the subject with a nimble writing style. This book will be accessible to fans up for a challenge as well as to academics. That said, reading some chapters of the book left me wanting more. Geffen touches on the influence of queer Black artists like Sister Rosetta Tharpe and Little Richard, but apart from (for example) writing about artists like Prince on a continuum with Little Richard and James Brown, they don’t put the gender-creative work of artists like Prince or Janelle Monae into a more intersectional context. The absence of cult figures like Jackie Shane is disappointing, but understandable, but I was surprised that the influence of  music videos only receives a glancing mention in chapters on bands that rose to fame in the ’80s. Also, it is puzzling that pop metal bands — who wore makeup, teased their hair, and wrote and performed crass, sexist songs — aren’t in the book at all.

Overall, Glitter Up the Dark helps readers understand and contextualize gender performance in popular music. It might change the way you listen to and engage with your favorite records.