Most years, the sheer number of new Beethoven releases call to mind Johann Reichardt’s verdict on Beethoven’s infamous December 1808 marathon concert: that occasion, he wrote, demonstrated “the truth that one can easily have too much of a good thing – and still more of a loud.”

But in this 250th birthday year, what is normally a daunting output has become a nearly overwhelming deluge of new recordings, rereleases, repackagings, and the like. So, in an effort to make sense of even a small part of it, over the next few months I’ll be taking a look at various Beethoven anniversary albums, beginning here with four sets of the complete piano concertos from, respectively, Paul Lewis, Stewart Goodyear, Inon Barnatan, and Stephen Hough. In many regards, Lewis’s take on the concertos (on the Harmonia Mundi label) is the most traditional of these four: his playing is unfailingly elegant and articulate, his tone warm, pacing smart, and command of the musical line unimpeachable. Yet, if on the surface his readings aren’t the edgiest, they’re anything but emotionally dull.

Rhythmically, there’s much to admire. The finale of the C-major Concerto (no. 1), for instance, is terrifically extroverted: the sforzandi articulations jump and the dialogue between piano and orchestra brims with playfulness. Similarly, the opening movement of the B-flat major Concerto (no. 2) is pert and characterful.

At the same time, Lewis plays the first movement of the G-major Concerto (no. 4) with beguiling elegance, from which the music’s expressive and rhythmic urgency peeks through discreetly but compellingly. In the finale, he allows the freewheeling invention of the writing to come across with bracing fluency.

Lewis also ably teases out the music’s latent lyricism. The Second Concerto’s slow movement is warmly balanced and flowing. The same qualities mark the C-minor Concerto’s (no. 3) middle movement, and there’s a gripping sense of drama in the fury-taming central movement of the Fourth Concerto.

Best of all is the E-flat major “Emperor” Concerto (no. 5), which Lewis plays with tremendous dynamic sweep and a strong sense of purpose. Indeed, everything pops in this performance, from its subtle articulations to details of phrasing and the play of instrumental colors. The central Adagio is ravishing – beautifully paced, every note rightly weighted – while the finale comes across as an exuberant, limber dance.

In these performances, Lewis is teamed with the BBC Symphony Orchestra and Jiří Bělohlávek. They’re all well-matched, playing together with agreeable warmth of tone, good balances, and a general “rightness” of style.

Filling out the Lewis set are all of the pianist’s extant Beethoven recordings for HM: an impressive reading of the Diabelli Variations and a largely fine survey of the complete piano sonatas. Taken together, then, this is about as strong a modern Beethoven keyboard box as you’re likely to find (to be filled out later this summer with Lewis’s release – also on HM – of the three sets of Bagatelles). 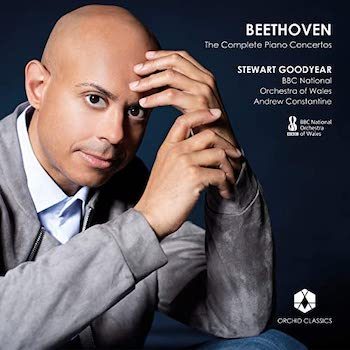 If, to some degree, Lewis represents the old-school Beethoven tradition of his mentor, Alfred Brendel, the Canadian keyboardist Stewart Goodyear offers a strikingly different take on the Beethoven concertos, as his recording of them with the BBC National Orchestra of Wales (BBCNOW) and Andrew Constantine on Orchid Classics attests.

In a word, Goodyear embraces the music’s underlying athleticism and youthful energy (all the concertos were, after all, written before Beethoven turned 40). This approach fits all five well, but works most impressively in the first three concerti.

No. 1 is wonderfully directed, the keyboard playing riven with purpose, pristinely balanced, and, throughout, dancing away. In the Second, nearly everything sounds fresh and spontaneous. The central movement is gracefully sculpted, while the finale rollicks with a precision of attack that is intoxicating.

Goodyear’s performance of the Third Concerto emphasizes the score’s Classical roots: textures are lean, the emotional element is a hair restrained, and there’s terrific rhythmic energy and precision on display in the big first movement. The middle one is gorgeous, spacious but never wanting for focus, and highlighted by some exquisite orchestral playing (flutes and violins sing with conspicuous nobility). In the finale, a romping, spirited account of its minore portion is offset by an absolutely ecstatic take on the C-major coda.

The Fourth and Fifth Concertos are treated to similarly high-energy readings. And, if Goodyear’s interpretations of this latter pair don’t quite plumb the music’s expressive depths as thoroughly as Lewis does, there’s still much to admire and enjoy.

He plays the outer movements of No. 4 with a nimbleness and freshness that’s roundly inviting, while the contrasts between soloist and orchestra in the second movement are rightly stark.

The first movement of the Fifth is grand and heroic in tone – but also quite lively and light on its feet. The middle one is soulful, while the finale overflows with pep, vigor, and mighty contrasts of dynamics.

Throughout, Constantine and the BBCNOW ably match Goodyear’s ingratiating sense of style in this music: to be sure, a big part of the sheer joy of this set comes from experiencing the kinetic rapport between pianist, orchestra, and conductor on display in each of these works. 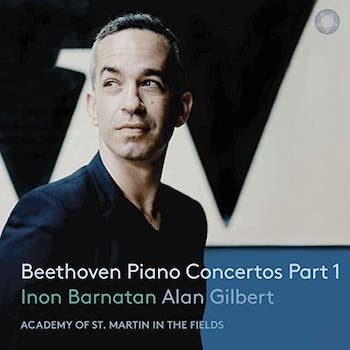 Falling somewhere between Lewis’s and Goodyear’s interpretive poles is Inon Barnatan’s two-volume traversal of the piano concertos (plus the Triple Concerto, Choral Fantasy, and Beethoven’s piano-and-orchestra arrangement of his Violin Concerto) with the Academy of St. Martin-in-the-Fields (ASMF) and Alan Gilbert for Pentatone.

Barnatan’s a terrific pianist and he shines, particularly, in the first four concerti.

No. 1 is marked by lean, energetic keyboard playing, replete with a winning sense of play between the hands and a wonderful command of the music’s phrasings. Likewise, No. 2 features piano playing that’s warm-toned, smartly shaped, and full of character, Barnatan’s voicing of the busy solo part clear and well balanced.

The Third is thoughtfully etched and phrased (including the first-movement cadenza, which feels a bit underpowered as it begins but builds to a mighty payoff), its finale successfully managing the delicate balancing act between muscularity and agility. And the Fourth, especially in its first movement, offers a spellbinding conversation between piano and orchestra: flexible, responsive, well directed, chamber-like.

Barnatan’s take on the Fifth is, like the first four, marked by good balances and a healthy dynamic range. Yet the orchestral playing is a bit soupy, rhythmically, and, a lovely account of the slow movement notwithstanding, the Rondo-finale proves stodgy and too carefully phrased.

Ditto for the Choral Fantasy, done in by a weighty, sluggish rendition of the solo piano fantasia; some listless playing from the orchestra in the subsequent variations; and underpowered singing from the London Voices at the end (whose ranks sound decidedly thin).

Better is the Triple Concerto, in which Barnatan’s joined by violinist Stefan Jackiw and cellist Alisa Weilerstein. The solo ensemble plays exceptionally well together, blending beautifully and graciously ceding the solo spotlight among themselves. Gilbert leads a generally lively and focused accompaniment from the ASMF.

The rarely heard piano arrangement of the Violin Concerto is a conspicuously welcome inclusion here, even if the adaptation is largely straightforward (the violin line is basically filled out – or doubled – by the piano’s left-hand part) and the orchestral writing unchanged.

Barnatan takes a relaxed, lyrical approach to it all, his playing in the first movement often inwardly focused – which occasionally results in the music grinding to a halt (or nearabout). The cadenza, though, is biting and lively, especially the inventive timpani accompaniments. The crystalline second movement gets a lovely, directed performance from Barnatan, while the finale dances, if a bit stiffly.

Overall, though, Barnatan’s performances are striking, particularly in the first set of concerti. And Gilbert, even as he proves a bit frustrating in the “Emperor” Concerto and the less-familiar fare, draws snappy, well-executed accompaniments from the ASMF in the rest. 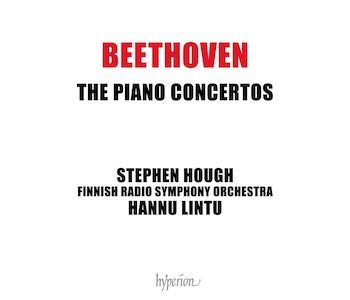 Last is Stephen Hough’s survey of the five concerti with the Finnish Radio Symphony Orchestra (FRSO) and Hannu Lintu on Hyperion. Theirs is an invigorating set, one that balances the best qualities of the historically informed movement – quick tempos, lean textures – with the full-bodied intensity of modern-orchestra Beethoven.

The First Concerto opens with a grand, rousing orchestral exposition that’s echoed by Hough’s energetic, beautifully phrased execution of the piano part. Throughout, textural transparency is the rule and, while there isn’t a hint of sentiment in this reading, Hough’s Beethoven is anything but clinical: quite the opposite – it’s always warm and lived-in. The radiant slow movement offers delicate episodes between solo clarinet and piano, while the finale is lithe and jocular.

The same qualities mark Hough’s rendition of the Second Concerto, which also includes some welcome embellishments in the repetitions of the finale’s rondo refrain.

In the Third Concerto, Hough draws a mix of turbulence and elegance from the involved keyboard part. All of it is beautifully shaded and smartly shaped, though. The slow movement is spacious and sonorous, the finale elegant but rhythmically tight – and capped by a rousing coda.

Contrasts of space and texture mark much of Hough’s account of the Fourth Concerto which is highlighted by a series of relaxed yet urgent dialogues between piano and orchestra in the opening movement.

For the Fifth Concerto, Hough takes a markedly lyrical approach. As a result, the first movement feels somewhat understated, though it doesn’t lack in rhythmic or sonic power when those are called for. The middle movement is time-stopping and serene, the finale frolicsome, energetic, and songful.

Throughout, Lintu and the FRSO supply accompaniments that are the model of expressive and technical precision. Woodwind solos, in particular, are spotless; balances between piano and orchestra flawless; tempos smart; attention to phrasings, dynamics, and articulative details pristine. The result is a captivating cycle of the Beethoven piano concertos that sounds and feels distinctly vital.