You are here: Home / Books / Book Review: “A Grief Sublime” — A Lasting Testament to the Power of Words to Sustain and Heal

Here is why you have to read this book:  It gives proof to my faith that those beautiful lines and paragraphs created through the ages can comfort in present distress and continue to do so as one heals.

All my life I have been convinced of the power of literature. From my freshman year in college when I first read Wordsworth and Shelley and Keats, I decided I wanted to read as much of the Western canon as I could, and, if I had the strength as I matured, to write something that mattered. I was lucky enough to be married for over 60 years to a man who understood my mission and encouraged me at every turn. He also knew that a lot of the conversation in my head — as my story “Company” attests — was with dead writers: James Joyce, Turgenev, Marcel Proust, Dante, Walter Benjamin, Virginia Woolf, John Keats, George Orwell, Walt Whitman, Willa Cather, the ancient Greeks, the 20th-century Russian poets, and many, many others.  But we both knew that most people do not go through their days as I did, and since his death a year ago, I have become more circumspect about what I read and whom I am talking to. So when I find someone like-minded, it is like meeting a friend you never knew you had.

Beth Robbins is one of those rare people, and her beautiful book A Grief Sublime is a lasting testament to the power of words to sustain and heal. That is what sets it apart from the usual memoirs about loss and what makes her story so compelling.

When her husband Steve Meyerowitz died instantly in a car crash on a country road here in the Berkshires five years ago, she and her three children and the entire community were crushed. He was known as “Sproutman,” because he had built a business growing sprouts of all kinds and selling them at farmer’s markets and online. From people who knew him, I have learned that he had unusual determination and optimism and a strong sense of himself as a husband, father, entrepreneur, pilot, and pianist. He and Beth, who teaches English and drama at a local Waldorf school, and their daughter and two sons were living a contented and comfortable life. Then, on a warm September night, a police car pulled into her driveway, and the nightmare began.

How Beth survived that nightmare and emerged five years later with a book of real substance is the subject of A Grief Sublime. Although at times you feel as if you are in a jigsaw puzzle of a prose poem—which is part of its charm and intensity—you are also in the midst of a story that has a trajectory, from paralysis and despair and rage to courage and a new kind of calm and safety. On the way we learn how Beth and her children coped with this awful loss, and we learn of her past: visceral childhood memories, like days at the beach, the dollhouse she bought with her bat mitzvah money, her trip to Paris, her fears and missteps until she met Steve while still at Barnard. Then how they became friends, she working for him when he was growing sprouts on windowsills in Manhattan, how he was her safe haven from the moment she laid eyes on him, and how their friendship grew into love and marriage. But also how they had independent interests which sometimes didn’t merge, as when she went up with him in a small plane, something he adored and she never really enjoyed. So we have a story filled with pleasure, ecstasy, and hope, but also regrets and longing, and some remorse.  Like all lives worth living.

The book is in 12 parts, and what makes it so interesting is Beth’s love of words, so we are called upon to evaluate the meanings of, for example, sublime, subliminal, friend, nostalgia, cave (both noun and verb), ecstasy, and chrysalis, among others. Here she is on liminal.

Liminal is derived from the Latin limen, meaning threshold.  It is a transitional or initial stage of  process. It means a position in more than one realm. Or, in a sense, in no realm. Pure potential.  Limitless energy. It recognizes boundaries, and yet exists in the boundless. It is sometimes concluded to be in the realm of the imagination. I experience it as a reality, almost tangible.

Then she tells us: “On the night of Steve’s death I was thrust into a realm I had previously intellectualized but was now forced to live in.” 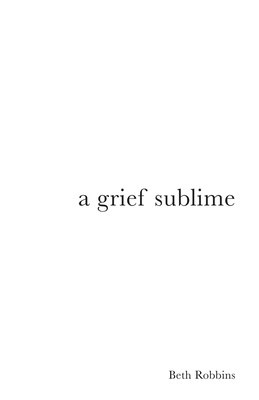 It takes courage to reveal as much as Beth reveals in this book: the howling rage she feels in Mexico, the confusion that grief creates, the annoyance when people say the wrong things (like the therapist who insists she was “robbed”), the fears she has for her suffering children, the gratitude when a friend does something unexpectedly tender, or the sense of relief when a hawk appears or a door bangs shut or a column of light appears, which she and her children see as evidence of their beloved Steve. As W.G. Sebald says, “The dead, they are always with us,” but only after you have experienced a loss like Beth’s are you alert to the signs and know the truth of that simple statement in your very bones.

Beth’s courage becomes action in the section “Rebirth,” when she decides, only a year after Steve’s death, to complete her MA at Oxford during the summer. There, sustained by the required reading—Melville and Whitman, especially—she convinces her professor to let her work on this memoir instead of doing a more usual thesis. So, as she explores the literature she loves and leans on it as she writes—quotations are sprinkled through the book, and in the addendum are the “Ode to a Nightingale” and lines from “Song of Myself”—Beth finds her voice. On the way she visits Keats’s house, and that’s when I finally dissolved into tears. In our 70s I convinced my husband to make the same pilgrimage and had the same feelings and actually heard a nightingale when we stood in the garden.

So here is why you have to read this book: It gives proof to my faith that those beautiful lines and paragraphs created through the ages can comfort in present distress and continue to do so as one heals. That they can be a bedrock as potent as God and should be passed on to your children and grandchildren as part of your legacy on how to live a decent and caring life. That they can lead you from the abyss exactly as Dante promised in lines quoted by Beth:

To get back up to the shining world from there
My guide and I went into that hidden tunnel,

And following its path, we took no care
To rest, but climbed: he first, then I—so far,
through a round aperture I saw appear

Some of the beautiful things that Heaven bears,
Where we came forth, and once more saw the stars.