You are here: Home / Books / Book Review: “For Kids of All Ages” — The Love of Cinema Burns Bright!

Peter Keough has edited a useful, insightful, and delightful new collection of short essays that explore films that appeal to adults who seek childlike glee or awe at the movies.

For Kids of All Ages, edited by Peter Keough. Contributions by the National Society of Film Critics. Rowman & Littlefield, 278 pages. 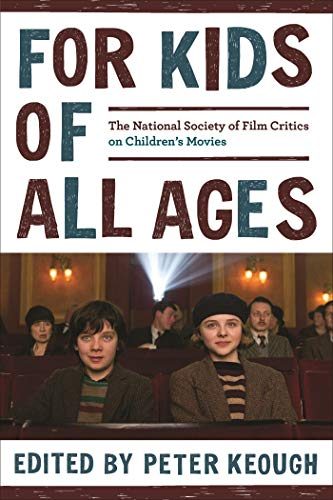 Let me begin with two observations: kids love movies, and film critics can be elitist jerks sometimes. These shallow generalizations may seem at odds, but they overlay a deeper truth: that a lifelong love of film is almost always catalyzed in childhood. This goes for filmmakers as well as for film fanatics. “Film critics are some of the most childish people you’ll meet,” observes editor Peter Keough, but perhaps that’s because at heart they are like kids who have fallen under cinema’s spell. So begins this new anthology of essays (by members of the National Society of Film Critics) on movies adored by big kids and small ones alike. The book’s release is being feted at the Brattle Theatre this week, with a number of films featured in the book screening in 35mm.

Editor Keough knows whereof he speaks. Not only is he a distinguished critic for the Boston Globe and the former film editor for the Boston Phoenix, but, as he relates in For Kids of All Ages, he became a fan of cinema from an early age. He found The Wizard of Oz to be “the most frightening of movies” and older war movies like The Enemy Below to be tense and satisfying. Keough recalls seeing films at Canton’s Blue Hills Drive-In, the Rialto in Roslindale Square, or on TV. Regardless of location, he relished the way movies added to his “vicarious experience of life’s joys and tragedies.” For what is cinema to children but a way to experience areas of life they have yet to face? The anthology examines some films that were expressly intended for children, but it wisely goes further, exploring films children might be particularly prone to enjoy. But, of course, enjoyment is not always how we experience cinema. As Keough puts it, viewers of all ages feel emotions ranging from “awe, terror, wonder, grief, and desire” to “hope and love.” We also go to films to be educated and delighted, to be confronted with visions we’d never dreamed of.

I wouldn’t presume to explain why some film critics find certain genres or categories of film to be anathema; we all have our likes and dislikes, after all. And I confess to being the kind of critic who doesn’t always enjoy a film that’s deemed a “kids’ movie.” In fact, I’ve noticed that people who love cinema tend to teach their kids to love movies by showing them films that aren’t necessarily “age appropriate.” Then again, age appropriateness in our era of media saturation is a relative term: we are beset by a bevy of protective, censorship-wielding devices and agencies. Yet we take pride in our kids’ technological savvy (and hacking skills). I was one of those kids who was reading, at a tender age, things adults might’ve considered inappropriate. I’m sure I watched material on TV that I shouldn’t have. Damn, I am sure the trauma induced by certain episodes of The Twilight Zone remains with me to this day; it undoubtedly inspired my lifelong love of horror. Though I didn’t start to think of film in an analytical way until graduate school, I was always deeply affected by movies. It was a revelation to grasp that films, like books, are texts, to be savored and pondered and reckoned with.

Keough has always struck me as being the type of film critic I prefer to read: a writer with a soul who allows himself to be deeply affected by cinema, who doesn’t resort to hard-nosed or cynical negativity for its own sake (but he can deliver delicious snark when called upon). It’s fitting, therefore, that he has edited this useful, insightful, and delightful new collection recommending films that appeal to adults seeking childlike glee or awe at the movies. Bringing together more than 50 short essays/reviews from members of the National Society of Film Critics, this anthology mixes previously published critiques with pieces commissioned specifically for this volume, giving writers an opportunity to reflect on how their own memories and experiences may have informed their opinions.

The chapters are divided mainly by subject matter (such as stories featuring real or mythical animals) and to a lesser extent by genres such as fantasy, adventure, and animation. The selection offers an excellent cross-section of the finest American writers on film. The prose here is erudite, sometimes argumentative, sometimes beatific, but always accessible. For example, Jonathan Rosenbaum writes at the beginning of his new essay on Howl’s Moving Castle (showing at the Brattle Theatre on December 28) that “sometimes movies earmarked for kids are a lot more nuanced, sophisticated, and mature then the ones that are allegedly for grownups.” He also admits that he tends to avoid such films — and then reconsiders whether this is the right approach.

If you have a favorite film critic they’re very likely featured in this collection. My own, Stephanie Zacharek (formerly of Salon and currently TIME’s chief critic), writes on The Band Wagon and Babe: Pig in the City. There’s Charles Taylor meditating on the mother of all disaster movies, Airport (showing December 30 in 35mm), and Hatari! Longtime Boston Globe critic Jay Carr has an essay on 1933’s King Kong (Keough will introduce the film at the Brattle Theatre on December 29). Boston critic and filmmaker Gerald Peary writes on What Maisie Knew and The Triplets of Belleville, as well as contributing the book’s inaugural essay on his youthful love of cinema growing up in rural West Virginia, where he lived until he was eight, when his family moved to South Carolina. Justin Chang, who writes for the L.A. Times, looks at the animated tour de force Song of the Sea (showing at the Brattle Theatre on December 28).

No doubt one of your favorite films is featured here, or a beloved story from childhood. Keough writes about four different versions of Beauty and the Beast and sees Pan’s Labyrinth (showing at the Brattle Theatre on December 28) as a Jungian fable about fascism as well as a dark narrative about growing up. His essays take up a delightfully eclectic assortment of films: Old Yeller, Yellow Submarine, Neverland, Batman Begins, Paddington/Paddington 2, and The Russians are Coming! The Russians are Coming! (Gosh, I sure miss those super long, silly film titles from the 1960s). Peter Rainer’s short essay on the Russian film Loveless (one of my favorites of 2017) gazes on the film’s stark, relentless story line, powerfully reinforcing my memory of its troubling portrayal of loss and selfishness and childhood’s endless pain. The inimitable Roger Ebert is here, writing about one of the best loved kids’ movies of all time, E. T. the Extra-Terrestrial.

The film’s final essay, Mary Pols’s “Watching Boyhood with a Boy and Eighth Grade with an Eighth Grader,” gives us a single parent who views movies with her son. It is, by turns, funny, moving, and sobering. But it is also incisive, as when she notes that the children in Boyhood (actors filmed over a period of 10 years) “move in and out of phases of beauty and awkwardness, then awkward beauty and back into beauty.” She then relates her son’s claims that the celebrated coming-of-age film Eighth Grade (showing at the Brattle Theatre on December 30) is essentially how he experiences eighth grade, and that he is relieved when he sees bad behavior depicted for what it is. Cinema for children is a kaleidoscope that stirs and shapes how they are going to look at the past, present, and future. Movies are gifts of possibility: creative, dramatic, horrifying, and heartbreaking.

Peg Aloi is a former film critic for The Boston Phoenix and member of the Boston Society of Film Critics. She taught film studies in Boston for over a decade. She writes on film, TV, and culture for web publications like Vice, Polygon, Bustle, Mic, The Orlando Weekly, Crooked Marquee, and Bloody Disgusting. Her blog “The Witching Hour” can be found at themediawitch.com.