John Nelson’s La Damnation de Faust is a triumph, both for the performers and its visionary composer; you will rarely encounter Villa-Lobos played with greater understanding or in better sound than here; Paavo Järvi and his orchestra’s survey of Messiaen orchestral works early and late is resplendent. 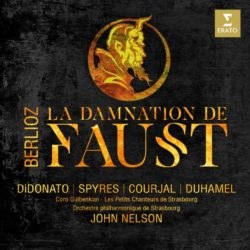 Earlier this year, reviewing Colin Davis’s Berlioz Odyssey, I made the bold prediction that the 150th anniversary of Hector Berlioz’s death in 2019 wouldn’t result in our seeing (or hearing) the composer in a new light. Nearly 12 months on, I’ll say this: I hadn’t been counting on John Nelson.

Surely, few composers have been as perfectly fitted to their subject matter as Berlioz was to Faust. The fantastic, the demoniac, the irreverent, the pure and noble – all of that (and more) have rarely been expressed more cogently or inventively than in this fantastical score.

Nelson’s performance of it certainly plays up the music’s grandiose moments: the “Hungarian March” snaps, the “Menuet des follets” is crisply articulated, while the “Ride to the Abyss” and “Pandemonium” are rightly chilling.

Indeed, the whole reading holds together with remarkable coherence: this is no mere hit parade. Throughout, there’s a terrific sense of character and color. The woodwind lines during Part 2’s Easter hymn speak with delicious clarity. The “Amen” fugue is sung with nasal insouciance. The English horn solo in Part 4’s “Romance” is burnished and fervent, while the harp and violin-quartet textures in the concluding “Epilogue” shimmer.

Singing the title role, Michael Spyres simply sounds incredible. Singing with an easy, light, pure tone that’s never forced and perfectly in tune (see his “Nature immense”), Spyres’s Faust is as perfectly sung technically and expressively as they come. In fact, it’s not going too far to say you’d be hard-pressed to hear this role sung better by anyone, anytime.

Joyce DiDonato’s Margarethe is likewise terrific: full-toned, warm, supple. She sings a lush “Le roi de Thule” and her chemistry with Spyres in the Part 3 duet is one of this excellent recording’s high points.

While Nicolas Courjal’s Méphistophélès is a bit less swaggering than some, Alexandre Duhamel’s Brander is mighty indeed, and the choral parts brim with energy and personality.

In all, then, this Faust is a triumph, both for the performers and its visionary composer. 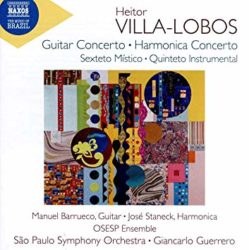 Here’s one of 2019’s unexpected releases: Heitor Villa-Lobos’s Guitar Concerto paired with – of all things – his Harmonica Concerto. You read that right: a concerto for harmonica and orchestra. Both date from the last decade of Villa-Lobos’s life and, while the former (written for Andrés Segovia) retains a degree of familiarity, the latter is a true rarity.

Written in 1955 for John Sebastian, the Harmonica Concerto runs a gamut of ideas: lyrical lines and mixed meters in its first movement; a sober, dirge-like theme in its second movement demonstrates the instrument’s impressively wide range; the finale is rhythmic and playful, with a big, mid-movement cadenza leading to a romping ending.

The present recording features the Brazilian harmonica player José Staneck and the São Paulo Symphony Orchestra (SPSO) led by Giancarlo Guerrero. Theirs is a spirited, touching performance. Staneck plays with a strong sense of phrasing and color, but also lots of heart – the slow central movement sings with great dignity. And the finale swells with carefree joy.

Guerrero and the SPSO deliver a lush but sensitive accompaniment, teasing out the first movement’s lyrical lines with subtlety and ably digging into the score’s vigorous episodes.

They provide a characterful accompaniment, too, in the Guitar Concerto, in which Manuel Barrueco tackles the involved solo part.

Barrueco’s account of the opening movement is full of lithe, dancing energy. The second’s gorgeous main theme is played with fervency, while the finale’s spunky patterns want nothing for personality.

Filling out the album are a pair of shorter Villa-Lobos works.

The 1917 Sexteto Místico draws on a funky instrumentation – flute, oboe, alto saxophone, guitar, celesta, and harp – that helps provide the piece a sense of throughgoing mystery. Played here by the OSESP Ensemble (a group drawn from the SPSO), its opening part is suitably phantasmagoric. The folk-like second is fluent and lively; songful oboe writing highlights the searching, mysterious third section; and the finale proves agreeably energetic.

The same group dispatches Villa-Lobos’s 1957 Quinteto Instrumental with aplomb. The first of its three movements, filled as it is with radiant harp writing, revels in bright, colorful rhythms. The second provides a serene contrast, with fragile, atmospheric textures and lyrical melodies. Wrapping things up is a vigorous, driving finale.

As usual, Naxos’s engineering is first-rate, taped in the acoustic gem that is the Sala São Paulo. You will rarely encounter Villa-Lobos played with greater understanding or in better sound than here. 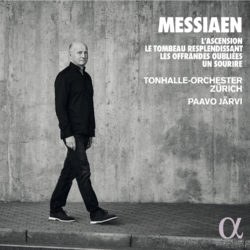 Olivier Messiaen’s oeuvre can be among the 20th-century canon’s tougher to crack. He seemed to have a sense of this, in a 1985 essay identifying his focus on rhythm, ideas about tonal colors, emphasis on birdsong, and Catholicism as potentially off-putting “difficulties” about his music. Yet all of those characteristics are defining qualities of his catalogue and, when presented rightly, can reveal his music to be not only profoundly moving but also downright accessible.

Such is the case with Paavo Järvi’s new survey of Messiaen orchestral works early and late with the Tonhalle-Orchester Zürich, of which he became music director this fall. In it, Järvi has juxtaposed three of Messiaen’s earliest works – Le Tombeau resplendissant, Les Offrandes oubliées, and L’Ascension – with one of his last, 1989’s Un sourire.

They’re all decidedly personal statements. Le Tombeau resplendissant looks back on Messiaen’s youth following the death of his mother and prior to his marriage to his first wife with a mix of bitterness and hope. Les Offrandes oubliées and L’Ascension are meditations on different aspects of his faith. Un sourire, written for the bicentenary of Mozart’s death, is a study in cheerfulness in the face of adversity.

Järvi and his band seem perfectly at home in all of them.

The tripartite Les Offrandes oubliées packs a lot into its 10-minute duration, all of which comes out in a terrific visceral performance here: a pungent, flowing “The Cross” leads directly into a ferociously taut, boldly colored depiction of “Sin.” Consolation is provided by way of a radiant “Eucharist.”

L’Ascension, too, doesn’t lack for color or drama. Even if it’s often pegged as a fundamentally immature Messiaen score, what comes over in the Zürich orchestra’s performance is thoroughly persuasive.

And Un sourire comes over with innocent warmth. The concept of the piece – bright, serene chords alternating with lustrous rhythmic episodes – is simple enough, but Järvi and his orchestra shape it all carefully and inevitably. The results, to borrow from an earlier title, are resplendent.