Enjoy Boston Camerata’s Free America! for its high spirits and its crafty, delicious way of making the iconoclasm of the past come alive. 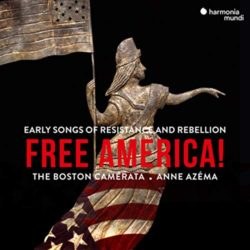 The 65-year-old Boston Camerata, led for the past 11 years by the able Anne Azéma, has produced a gem of a CD, Free America!, for its return to Harmonia Mundi (for whom they recorded in the 1980s with Joel Cohen). Known for its excellence in early music, and unusually interesting programming, Boston Camerata has continued to thrive and thrill under Azéma, who took over as artistic director from her husband, Joel Cohen, now director emeritus. “This music is about the soul of the American founding generation. There is strong momentum and connection in looking backward and being able to invent forward” explains Azéma in the album notes. The disc’s assembled songs, marches, jogs, ballads, and anthems of rebellion and resistance date between 1780 to 1880. Some, like “Columbia, Gem of the Ocean”  and “Yankee Doodle” are familiar, but  sound fresh in this rabble-rousing context.

The tyranny-despising repertoire (29 tunes in all) of Free America! consists of music for voices, for voices with instruments, and for instruments alone. Several works, including songs found in the archive of the Maine Shaker community, touch on the injustices of slavery. The instrumental music comes from various sources, including manuscript booklets used by early flutists and fiddlers.

A gifted cast of singers and instrumentalists draw a compelling, multitextured portrait of a young nation, made up of songs and tunes responding to the American Revolution. Five excellent singers deftly generate the excitement and patriotic passions of the theme: Anne Azéma, soprano; Camila Parias, soprano; Deborah Rentz-Moore, contralto; Timothy Leigh Evans, tenor; John Taylor Ward, baritone.  Sadly, Evans, who had sung for 25 years with the Camerata, passed away last summer after a sudden and massive heart attack — it is a profound loss to the Camerata family.

The Camerata’s moving performances in Free America! revel in speaking/singing truth to power. Invigorating lyrics, perfect tempi, and kaleidoscopic vocal/instrumental colors characterize the project, whose excellent program notes limn the music’s historical background and sources. The program/CD is organized around topic sections: All Unite!, Gone for a Soldier, Repentance, The Rich Man, and The Land of Freedom. The dramatic development of the album moves seamlessly from one song to the next, strong messages delivered through constantly changing textures.

Three a cappella songs here are ravishingly sung. Joel Frederiksen supplies a luminous rendition of “My Body Rock ‘Long Fever.” “Didn’t My Lord Deliver Daniel” is stirringly sung by John Taylor Lord (“I wish I been to the kingdom to sit alongside my Lord … By de help of de Lord,we rise an we’ll get up to heaven at last.”) Finally, Timothy Leigh Evans’s “O Zion Arise” shows why he will be so missed. The beautifully sung “David’s Lamentation” by William Billings repurposes a biblical text — David weeping over his son Absalom — into a powerful political statement. The three women (Parias, Azéma and Rentz-Moore) singing “Johnny Has Gone for a Soldier” is simply heartbreaking.

The women are given ensemble songs of their own to perform, as are the men. One of the ironies here is that Free America!‘s didactic messages never come off as monochromatic —  dissidence takes different directions and moods. Tired warhorses like “Yankee Doodle” never sounded more mischievous — or irreverent. The nimble contributions of percussionist Andrea Wirth should be noted. Yes, there is an enormous amount of history here, but it is very easy to forget the immense amount of research this CD entailed. Just sit back and enjoy Free America! for its high spirits and its crafty, delicious way of making the iconoclasm of the past come alive. Don’t forget to raise your fist in defiance once or twice while listening.

The Boston Camerata will perform music from Free America! on November 8 at Faneuil Hall, Boston, MA