You are here: Home / Books / Book Review: “We Are All Good People Here” — From All Sides

We Are All Good People Here is an enormously insightful examination of how dangerous suggestible people can be, to those around them and to themselves. 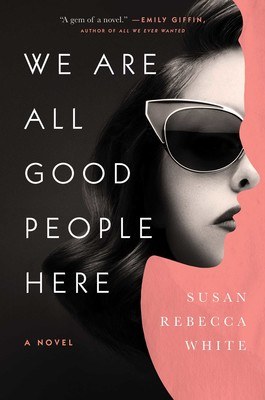 At first, Susan Rebecca White’s new novel, We Are All Good People Here, seems like it’s Forrest Gump told from Jenny’s perspective. Spanning the tumultuous decades from 1960 to 1990, the novel depicts the different paths of two women making their way from a conservative Southern university into activism and then adult life. Despite its plain language and its determination to check off most of the major political events of the late 20th century, We Are All Good People Here is far more complex, far more character-driven, than the crowd-pleasing, nonjudgmental Gump. But be warned: the novel’s intensity takes its time to arrive. Impatient readers might give up well before White’s ideas catch fire.

The novel opens in 1962 at Belmont, a fictional women’s college near Roanoke, Virginia. Daniella, a middle-class young woman from Washington, DC, meets her roommate, Eve, a wealthy debutante from Georgia, and the two cement an immediate friendship. Daniella opens Eve’s eyes to the inequalities persisting in the South, just in time for the civil rights movements of the early 1960s. “Eve told Daniella it was bad manners to pry, to which Daniella responded that southern manners helped to keep segregation in place.” The pair transfer to Barnard in New York City, where they begin to grow apart. Daniella meets a friendly, conservative fellow whom she tugs over into liberalism, and later marries, and Eve latches onto an arrogant activist who drags her into deeper and deeper trouble. Daniella becomes a lawyer, while Eve vanishes into an underground activist group, Smash, akin to the Weathermen and the SDS.

The two women separately settle in Atlanta, and some years later, Eve decides to surface in respectable life after becoming pregnant. A lawyer at Daniella’s firm helps to resolve Eve’s legal issues, and then marries her. The book’s second section concerns Eve’s and Daniella’s daughters, who reflect their mothers’ differing experiences and economic circumstances. Ultimately, Eve’s past rears up to harm her daughter, and her life changes directions yet again.

Somewhere in the book’s final third, it becomes clear that We Are All Good People Here isn’t just a series of set pieces that reimagine the historical greatest hits of the Baby Boomers. Instead, the novel is a character study of Eve, through the events of her time. As such, it’s an enormously insightful examination of how dangerous suggestible people can be, to those around them and to themselves. “She frustrates me endlessly,” Daniella explains to her daughter:

Her life has offered her so many opportunities, so many second chances—second chances no person of color would ever get, by the way. Yet she continues to bury herself again and again in the dogma of whoever has captured her attention at the moment.

Initially, that’s civil rights. Then, it’s Smash. Then, it’s conservative optimists—the segment of America that elected Reagan after the political chaos of the 1970s. Finally, it’s evangelical religion. The only characteristic that persists in Eve across all these movements is a buried masochism, a need to punish herself that manifests in the identity-obliterating movements and people to which she attaches herself. Daniella observes her friend’s troubles with love and volunteers to help, when possible. But ultimately, Daniella rejects Eve once she realizes that Eve substitutes money and the approval of others for a genuine core of self-esteem.

Susan Rebecca White keeps all this interesting with solid, unflashy writing, intelligent plotting, strong pacing, and startling depth of insight. We Are All Good People Here starts off simplistic and overly expository, but soon enough White’s portrayal of the dynamics in Smash transforms the novel into an irresistible read. In an unpleasant scene at a dinner table, she demonstrates the joylessness, paranoia, and emotional manipulation inherent in groups when collective anger turns inward, toward individual members. “During Smash sessions Warren was harder on her than he was on anyone else, enumerating the ways in which she still held herself above the group, still saw herself as special, wasn’t yet committed, wasn’t yet ready to die for the cause.” And she points out exactly what’s obnoxious about activists who are in it for the glory of ego or anarchy: they use the smallest excuse to turn every conversation toward their agenda, rather than seeking to genuinely connect with people.

Additionally, White doesn’t depict the 1960s and 1970s as one-dimensionally as Forrest Gump does. The other side is heard. Eve’s savior and later husband narrates a chapter in which he criticizes the antiwar movement: “When he saw protesters on the nightly news he just shook his head. Children. They seemed like children. As if you could change the human condition by offering a flower to a soldier. As if war were something new.”

Each narrating character in We Are All Good People Here brings a distinctive shard of colored glass to the book’s kaleidoscopic examination of late 20th century events. Wisely, White does not privilege any particular view. She saves the energy she’d use on editorializing for making these characters breathe on the page.  By respecting a variety of perspectives. she has created an unexpectedly rich novel, worthy of a reader’s patience and serious consideration.