Arguably, the strongest entry in the BSO’s complete Shostakovich symphony cycle thus far; Esa-Pekka Salonen’s 2016 Cello Concerto is emotionally direct and, at times, simply gorgeous; the resurgence of interest in the music of Boston-educated composer Florence Price is a good thing. 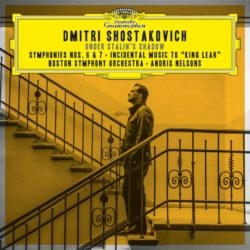 Who knows – but it should: this is, arguably, the strongest entry in the series thus far.

The release is built around the brooding, enigmatic Sixth Symphony and the propagandistic Seventh, both of which were taped live at Boston’s Symphony Hall.

In the case of the Sixth, Nelsons’ reading is direct and no-nonsense. Its big first movement is grippingly intense and always moves with purpose. The subsequent two movements come over with biting acerbity: the climaxes of the second are particularly ferocious, while the finale barrels through to a raucous last cadence. For interpretive immediacy and excellence of recorded sound, then, this recording is the Sixth’s new benchmark.

As for the Seventh, Nelsons and the BSO don’t top the inexorable power Leonard Bernstein drew from the Chicago Symphony in his classic 1988 recording. But they’re no slouches, either. The long first movement is smartly paced, and it’s to Nelsons’ credit that the latter three don’t simply feel tacked on but fit into a larger vision of the piece while delivering a big emotional payoff. That’s no small accomplishment in this piece.

The Suite from the Incidental Music to “King Lear” and a lively account of the Festive Overture round out this excellently-played and expressively urgent set. 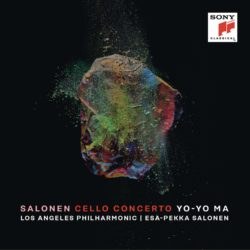 Esa-Pekka Salonen’s 2016 Cello Concerto picks up right where his 2009 Violin Concerto left off. Which is to say, in a beguiling world of ear-catching sonorities that rather gleefully follows their own path.

If you’ve followed Salonen’s music in the decade since he stepped down as music director of the Los Angeles Philharmonic (LAPO), you won’t have any trouble placing this new Concerto, which was commissioned by the Chicago Symphony: echoes of Nyx and Karawane are there, as well as allusions to earlier pieces of his like LA Variations and Insomnia.

The first movement is sumptuously lyrical, often colored by subtle percussive scoring. It’s also brimming with counterpoint, sometimes of the most delicate variety. Discreet live electronics come into play during the interlude-like central movement, which builds to a lush climax before leading directly into the finale.

Here, Salonen’s writing lets loose, the solo cello often accompanied by pulsing bongos, maracas, and pizzicato strings. Fragments from the first movement return before the movement unwinds in an exuberant dance that’s interrupted by a series of cadenzas.

Salonen wrote the piece for Yo-Yo Ma, who plays it here with breathtaking command. None of its demands – from crunching quadruple-stops to a last note that’s well off the fingerboard – intimidate the cellist, whose bona fides as a new-music champion are second-to-none.

The composer leads the LAPO in an accompaniment-in-name-only: the ensemble is Ma’s full partner throughout, its playing brightly colored and rhythmically secure. 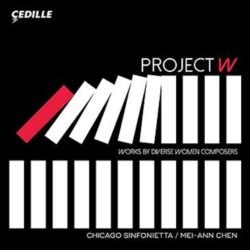 One of the happy developments in the classical music world of late has been the resurgence of interest in the music of Florence Price. The Little Rock-born, Boston-educated composer and pianist made her home, for about half of her life, in Chicago, so it’s especially appropriate that the Chicago Sinfonietta’s new album, Project W, a survey of music by women composers, begins with some music by Price.

In between them come Reena Esmail’s Hindustani-influenced Charukeshi Bandesh and #metoo. The latter, with its thrashing riffs and glowering chords, provides the album with a defiantly emotional anchor.

Mei-Ann Chen leads the Sinfonietta in propulsive performances of all six works. There’s more than enough rhythmic energy to go around but these aren’t simply muscular readings: the Price, Esmail, and Higdon scores are craftily phrased, while the Assad and Montgomery works gambol amiably. In all, then, this is a timely and inviting winner of an album.