The Ash Family is a full-color illustration of how the modern world leaves people vulnerable to radical ideas. 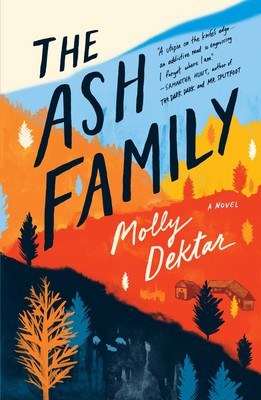 What’s the line between a commune and a cult? There are clinical answers to this question — Rick Alan Ross, for one, has devised criteria commonly used to distinguish a cult — but much more emotionally stimulating is meditating on the quandary for a few hundred pages. Molly Dektar takes this task on in The Ash Family, her debut novel, and she fulfills this mission with grace and care. The book is a full-color illustration of how the modern world leaves people vulnerable to radical ideas. In some ways, this is a pastoral novel, even if its emotional landscape is jagged and dangerous.

Berie, a nineteen-year-old from North Carolina, doesn’t quite have the courage to tell her mother she doesn’t want to go to college until she’s on the way to orientation. At a bus station, she meets Bay, who convinces her to travel with him to a farm near Asheville. There, a group of like-minded men and women have built an off-grid life under the leadership of the charismatic Dice. The Ash Family raises pigs, sheep, and cows; they work the land; they occasionally dumpster dive for what they can’t produce on their own. Some of the particulars of the collective’s existence aren’t well-defined, such as the exact number of people on the farm and the plumbing situation. However, Dektar’s recounting of farm life is extensive and detailed, and her descriptions of the natural world are almost peerless: “The afternoon was glaring gold, the mountains violet. Heavy happiness came down and trapped us in its wax.” “The sound of the cicadas and katydids and frogs covered everything. To me their sound, vast and tuneless, was the sound of the cooperating bacteria that Dice said were four billion years old.”

At first, Berie is satisfied with the purposeful tasks she is given and the love she is shown by the family. She feels comfortable being told what to do; she finds the rhythm, work, and silence of farm life soothing: “I couldn’t tell if I was happy or sad. All the clutter in my head was gone.” In her life before the family, she drifted, uncertain, among the material objects her mother obsesses over and the choices she feels unready to make. The subtext of Berie’s discomfort with the modern world is connected to the effects of global warming: “She wanted a life of safety for me, as though safety were still possible on the choked earth. Safety was a relic from before humans destroyed the world.”

However — somewhat predictably — the Ash Family isn’t the utopia it appears to be. Dice keeps secrets and engages in hypocrisy. The protest “actions” he plans, on behalf of the environment and preserving the family’s land, require not just markers and posterboard but a stockpile of napalm. Lives are at stake in these conflicts, but the novel’s emotional fabric is more compelling than these dark threats. Berie’s conflicts and entanglements with family members might be seen as trifling, but they resound loudly in the narrative. When the protagonist turns away from loyalty and toward self-preservation — just a little, in even one sentence — the reader gasps.

Further, the novel is almost a guidebook for getting out of an abusive relationship. Berie’s relations with the unpredictable, uncaring Bay certainly qualify — “I remembered…how he burned my hand and kissed me. I remembered the hurt made the softness all the lovelier.” But her situation on the farm in general suggests a cycle of abuse. She begins to feel disillusioned, and Dice gives her more attention and trust. She recommits, and punishments appear out of nowhere. During the last fifty pages, she rehearses idealized scenarios in which she leaves the family and then returns, thinking that all will be well if she can just do what’s she’s asked in the right way. Of course, as anyone who’s been in an abusive relationship knows, there is no right, safe, comfortable way to leave. But you must.

And Berie does leave, eventually, dramatically. (This isn’t a spoiler; the book occasionally departs from Berie’s naïve nineteen-year-old voice for a more distant, mature intelligence.) Still, The Ash Family ends without much closure. Does Dice get his comeuppance? Will Berie go to college after all? How do the Family members rebuild themselves after years of numbing acquiescence? Because of this rushed ending, the book lacks urgency and perspective, offering itself as a what happened without much of a so what.

There are other issues. Berie’s attraction to Bay, a key motivational force, never makes a lot of sense. Dektar spends a great deal of effort on the binary opposition between the farm and the modern world, but too little on a middle way of life that is so clearly Berie’s desire. The farm’s rules — no modern medicine, no reading, no sex — are unhealthy, but the connection Berie feels to nature would be impossible to replicate in a contemporary context. In an early scene, Berie explains a moment in the woods when she felt genuinely alive: “I remember feeling all of the forest moving through me. School, college, my mother were a dam on the river of a vivid life; out of doors the dam would break and I would tumble in the current.” What’s the solution for someone who feels this way? Resisting the urge to run toward utopia, remaining in the modern world yet not succumbing to meaningless capitalism, is a journey readers could stand to hear more about.

Still, a few weaknesses can’t tarnish the excellent work Dektar has done in bringing this story to life. Her carefully considered prose makes the reader tumble into this book like a well and emerge breathless. Whether the Ash Family is a commune or a cult, whether Berie is an idealist or a stooge, this trip off the grid is a pleasure to take.