You are here: Home / Books / Book Review: “The Bird King” — Nothing But Enchantment

The Bird King is an utterly lovely reading experience. 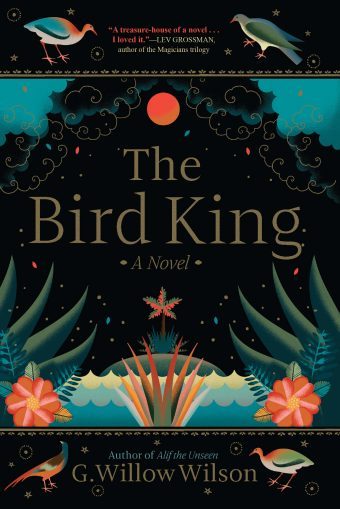 I truly cannot remember the last time I read a book that made me feel the way The Bird King made me feel. It’s the sensation I had when I read books as a little girl: that there was a whole, marvelous world spinning and sparkling inside those pages, and that everything I ever needed to know about life and how to live it was in there too. This world is at once a secret that belongs to me and something anyone can access; a place that only exists in the marks on the paper, and yet something that sits, tangibly, fully extant, on the other side of a supernatural barrier. The Bird King is an utterly lovely reading experience. It ensorcelled me completely. I don’t expect to read another book like it for many years, if ever.

The novel begins in 1491, in the once-great realm of Granada, the final outpost of the Moorish empire in the land that is about to become Spain. Our heroine, Fatima, is a younger member of the sultan’s harem, and her best friend, Hassan, is a mapmaker with special powers of creation and erasure. Visitors arrive from the court of Ferdinand and Isabella to remove the sultan from power and enfold Granada into Spain, a mission that they claim will be peaceful. But Fatima learns that they have come to do the work of the Inquisition. She and Hassan escape with the help of a trickster djinn, and the trio go on an old-fashioned fairy-tale journey across desert and mountain: evading enemies, facing trials, and fighting for their lives. Ultimately, they find an island beyond the normal rules of time and geography to settle and defend, but even that magical place, where Fatima assumes command, is not safe from the Inquisition.

The treats and surprises in the novel are plentiful. For one, Fatima is a feminist, even if there was no word for that in the fifteenth century. When her companion says “God bless the man who first taught the world how to cure olives,” as well as the man who invented cheese, Fatima replies, “They were probably women. If they were men, we would remember their names.” When the sultan asks, in confusion, why Fatima is angry all the time when she is given every luxury, and what else she could desire when she is so cared for, she answers, “To be sultan.” She seeks freedom, steadily and laboriously, throughout the book. This is a prize most of the people she knows wish to deny her, either because she is too young, was born into the wrong class, or is female. But her bravery and persistence lead her to victory, and to a life that belongs to her alone.

Another enriching subtext here is the Muslim tradition and culture, which Wilson drew on to write this gorgeous book. I am missing a lot of these resonances, I’m sure, but even I can pick up on what she’s saying in certain key quotes: “The people who want to burn you alive will find a reason to do it, whether you pretend to agree with them or not.” And: “The Inquisition and the Castilians—they’re not just out there, they’re in my head. Your head, too. They’re inside the only thing that was ever really ours. Even our stories are not our stories. We tried to tell our own, Fa, and all we did was end up telling theirs.” And: “No one can choose who God loves, or change who God loves. Not even the Inquisition.”

This is not to say that The Bird King is pointedly relevant to our current political moment, but it’s not irrelevant, either. The nature of persecution never really changes, and “some ideas are so beautiful that even evil people believe in them.” The novel may be a tale of magic set half a millennium ago, but its wisdom is immediate. The spell Wilson casts is partially due to her mixing and matching the kinds of stories human beings have been telling each other in all cultures since the beginning of narrative. A naïve and virtuous heroine sets out on a long journey, like in a European fairy tale…but she is far from virginal. Her companion, a sorcerer, is devoted to her…except when they squabble like siblings. And besides, she’s the warrior while he’s the tenderfoot. She receives help and guidance from a powerful supernatural force…but that force often teases and insults her. He has a tendency to eat her foes. Wilson has braided together the strands of multiple narrative traditions while adding a great deal of her own innovation and poeticism. The result is four hundred pages of pure, genuine enchantment.

I cried when The Bird King was over. The ending contained sorrow, but I was mostly upset because there was no more of  the novel to read. I would have been satisfied to read this narrative for years. No summary, no quotes, no analysis of this book can communicate the all-encompassing pleasure of reading it, paragraph after paragraph, page after page. Read it, and treasure it.