You are here: Home / Books / Book Review: “For Other Ghosts” — Stories that Surprise

The twelve stories in this collection are set in radically different places, use multiple forms, and reflect varying levels of political engagement. 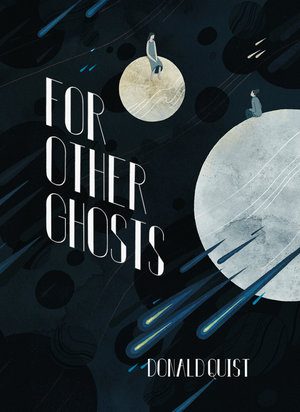 From a writer’s perspective, a collection of short stories assembled from several years’ worth of work can be seen as a stylistic scrapbook, a collection of attempts at new forms and themes. The result, if the reader is lucky, is a risky, heterogeneous collection, filled with trial, error, and sometimes genuine beauty. Such is the case with For Other Ghosts, the first collection by Donald Quist. It contains twelve stories that are set in radically different places, use multiple forms, and reflect varying levels of political engagement.

The stories take place in Ghana, Thailand, Japan, and a handful of US regions (Hawaii, New England, Texas, California). The narrators vary in age, gender, and race. Quist’s formal experimentation includes a story written almost entirely in the interrogative mood (“Lalita Rattapong’s New Microwave”), one written as an email (“No Subject”), and one that takes the form of news posts and the internet comments attached to them (“#COOKIEMONSTER”). What binds the narratives together is a profound interest in true moments between people, whether they are connecting, confessing, or in conflict. For instance, in “She Is a Cosmos,” the main character, Alma, recalls feeling burdened by her mother’s rhetoric:

Years later the playful admonishment began to carry resentment. Tell your daughter to clean her room. Your daughter needs money for classes. I don’t know, ask your daughter. Alma could hear how much her mother believed herself to be trapped.

He asked how that made her feel.

“Preface to Tales of River” features an ingenious remix of a character from Joseph Conrad’s Heart of Darkness. Despite the story’s interest in formal constraints — it is a fictional preface to a fictional book — Quist cannot help but focus on people. The protagonist is not Charlie Marlowe, the author of Tales of River, but a student, Coventina, who “suggested he tell another story” after he explains the plot of his exploitative novel to his class. Across the world, in New England, a character in “A Selfish Invention” mentions Tales of River and the fictional Charlie Marlowe as established fact, as if For Other Ghosts rests on a literary canon of Quist’s own making.

“A Selfish Invention” is that rare story about life in an MFA program that’s actually interesting. In it, a drunken professor speaks in deliberately literary paragraphs, in the voice of every blowhard who’s ever mined a seminar for conquests: “She was just here. A girl. Her breasts are substantial but not gratuitous, you know? Falling from her chest but not drooping, they tug at her clavicle, creating pockets deep enough to carry sips of water between her collarbones and her long elegant neck?” The story’s main character, DeYana, does not roll her eyes after this little speech, but the reader is clearly meant to. She and her professor argue usefully about writing and diversity — the professor whines about being accused of cultural appropriation, and DeYana asks “What if I don’t have anything to say about my people’s experience?” Ultimately, DeYana concludes that she doesn’t care about her professor’s limited advice.

She considers the possibilities of defying convention and bending form and becoming successful without having to follow a restrictive template or parade herself as other. […] “Maybe,” DeYana says to herself, “I won’t be for sale.”

Quist might be talking about himself but, whether he is or not, the story is thought-provoking, funny, and even wise. In it, a person forced into a situation of powerlessness asserts what power she has. Other stories in the collection use the same strategy. In “Testaments,” a mother and daughter drive across the country, the daughter playing along with the mother’s destructive fundamentalism, and the power each holds over the other shifts back and forth as the story moves gracefully toward its sad conclusion. “TWIN PILGRIMS” is structured by the central character’s personal investment in a space shuttle launch, but in its plot, an amoral man with a dead-end life seizes power through acts of violence. Most potently, in “#COOKIEMONSTER,” a housekeeper lets karma punish a privileged teenage boy; her passivity gives her agency in a situation where she has none.

These stories also treat time in an unusual, nonlinear fashion. Some pieces, such as “They Would Be Waiting” and “Memorials,” slide back and forth between decades, offering little guidance regarding the chronology of their characters’ journeys. The closing story, “The Ghosts of Takahiro Okyo,” lays out explicitly what Quist has been depicting in this vein all along:

But time and the distribution of energy are relative. More than a dozen people, sharing the same soul, each carrying an internal clock of identical design and function, moving in motion relative to each other and situated differently in regard to various gravitational masses, will always view those other clocks as wrong…They are not parallel worlds, just events occurring in different order all dependent on the motion of the observer.

Built out of a series of character studies, set in the “suicide forest” of Aokigahara in Japan, this ghost story is an affecting, elegiac achievement, the perfect close to Quist’s fascinating collection. The narratives in For Other Ghosts are quiet, rich, varied, and — an exceedingly rare quality in contemporary story collections — surprising.