You are here: Home / Books / Book Review: “After Ireland” — An Insightful Survey

The critic settles too comfortably too often on a familiar trope — Ireland’s sense of promise squelched.

After Ireland: Writing the Nation from Beckett to the Present by Declan Kiberd. Harvard University Press, 560 pages, $39.95. 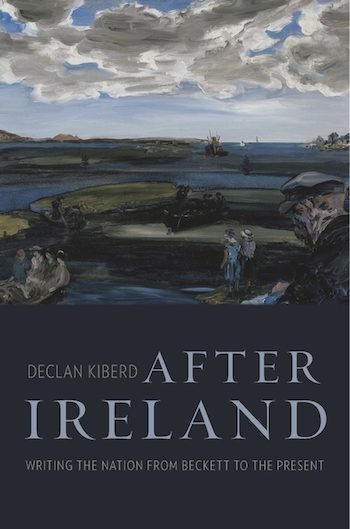 Recently, I have written in this magazine about the problematic notion of a national history. Similar issues arise when considering the idea of a national literature. Irish literature, if there is such a thing, provides myriad examples of writers grappling with the idea of the nation. In After Ireland: Writing the Nation from Beckett to the Present, noted scholar and critic Declan Kiberd adds to his career-long project of analyzing the literary traditions of Ireland. His latest book is a worthy effort, full of pointed observations about the development of Irish letters in the latter half of the 20th century and the beginning of the 21st. But, despite the subject’s complexity, he fails to generate enough intellectual drama to move beyond tried and true insights detailing Irish literature’s obsession with its exhaustion.

This volume is the third installment in Kiberd’s trilogy, which is dedicated to tracing the development of Irish writers, both major and minor, through their numerous interests, ranging from language, colonialism, and rebellion to religion, music, gender, and, perhaps above all else, history. After Ireland follows Irish Classics and Inventing Ireland: The Literature of the Modern Nation, which bring Irish writing to the present day, touching on the voices articulating such contemporary theme as post-Celtic Tiger Ireland, and new forms of deprivation and struggle in the neoliberal global economy. Kiberd’s thesis takes the form of a diagnosis, an examination of the faltering health of a national idea:

The available forms of the state proved unable to contain or embody the very idealistic ambitions of the nation. Yet, as political hopes of sovereignty were annulled, culture became in many ways more important than ever, as a means of alerting people to the crisis and of embodying the unstilled [sic] longing for expressive freedom.

This diagnosis — as with the fates of many authentic emancipatory efforts and their aftermaths around the world — is a confirmation of tragedy.

Ireland shares this pessimistic condition with many other (semi) postcolonial nations: “None of the writers considered here,” argues Kiberd, “has ever announced the final failure of the national project, but many have believed that (to borrow a phrase of Salman Rushdie) their country had been insufficiently imagined.” In the decades before independence, Joyce proclaimed that “Ireland is the old sow that eats her farrow.” The writers that came later, believes Kiberd, elaborated on that thought, suspecting that “the country might have been stillborn.”

Samuel Beckett is among the 20th century’s preeminent visionaries of defeat, his artistic accomplishment interlaced with his acceptance and comprehension of failure and dreaming about how to fail better. His pessimism and role as an exile place him in a particular Irish literary tradition of dark humor that is necessary to critique the culture of a stillborn nation, where time moves and things change, but in ways that are familiar. “Many of Beckett’s jokes are epitaphs on discarded hope. They project the condition of a people who had looked backward on frustration and forward to liberation, but with no intervening period of fulfilment.” Kiberd provides illustrative examples.

“Do you believe in the life to come?

Mine was always that.”

And from his Waiting for Godot:

That’s what you think.”

Unfortunately, I felt similarly when reading this essay collection. It’s an illuminating book, but the critic settles too comfortably too often on a familiar trope — Ireland’s sense of promise squelched. Another problem with Kiberd’s volume is that I’m not certain who this book is for. The critic attempts to straddle the line between academic and popular criticism. Of course, this balancing act is admirable; Kiberd has done as good a job as anybody in making James Joyce accessible to a larger audience with his book Ulysses and Us, which emphasizes the Joycean theme of the epic quotidian. But After Ireland has a much less exciting through-line. In fact, it is slightly wayward, structurally, lacking a common thread that connects all of the volume’s writers and sub-themes. The latter are represented in a series of “interchapters” that don’t always develop into a comprehensive argument.

This said, Kiberd is a masterful critic; he knows the writing of Ireland from head to toe. Anyone who’s interested in Irish literature would benefit from this volume. I appreciated being introduced to a number of writers I’d either never gotten around to or had never even heard of. After Ireland investigates an impressive selection of late modernist and postmodern writers. Among the chosen: Beckett, Edna O’Brien, Frank O’Connor, Seamus Heaney, John Banville, Eavan Boland, John McGahern, Seamus Deane, Tom Murphy, and others.

Kiberd gives more care and space to some writers than others. The volume’s most accomplished essay is the long analysis of Banville’s “science trilogy, which concerns Copernicus, Kepler and Newton.” Here “Banville explores the nature of creative genius, imparting a sense of adventure to the life of the mind.” Banville is a highly impressive stylist, and Kiberd’s piece meticulously examines the writer’s aesthetic maxim: “Form is anterior to theme.” In this way, Banville meshes, dialectically, with the other most important writer in After Ireland, James Joyce.

Joyce is not technically included in this volume, but his presence is everywhere and Kiberd references him often. Though Joyce is perhaps the most exceptional stylist in the English language, he “allowed the many styles of Ulysses to evolve from their multiple subjects in ways the contemporary writer finds drearily schematic.” (I don’t agree.) Curiously, Banville insists that he’s a “European” writer, even though he’s lived his entire life in Ireland. Joyce only wrote about the small lives of Dubliners, but he lived in exile on the continent. Neither of these two writers, who are stars in Kiberd’s Irish firmament, were ever all that concerned with the idea of the nation in the way that is highlighted in this book, at least in a number of its essays.

In general, I agree with Kiberd’s analysis of Irish writing. However, I am left unconvinced that the essays in this volume sustain his arguments about a revolution denied. The notion of the ‘stillborn’ becomes yet another conceptual straitjacket on imaginative unruliness. The book is valuable because it is (yet another) meditation on Ireland’s profound literary tradition and the aesthetic accomplishments of its authors, which are themselves endlessly fascinating. Read After Ireland charitably by taking it for what it is: a perceptive survey that includes a deep dive into some well-known and minor Irish authors, as well as providing an introduction to others. But it ultimately leaves its grand thesis inadequately substantiated.