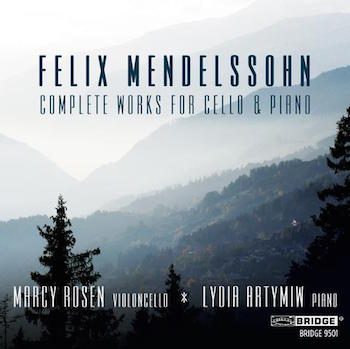 Bridge’s new recording of Mendelssohn’s complete music for cello and piano with cellist Marcy Rosen and pianist Lydia Artymiw features, across the boards, performances of unfailing grace and lyricism. This tends to serve the music well.

The Cello Sonata no. 1 has its turbulent moments in the outer movements and here they’re ably mined by both players. But the standout episodes are the songful ones – the middle movement’s second theme, the finale’s refrain – which are played with canorous warmth.

So, too, the album’s shorter selections, the Variations concertantes, the op. 109 Song without Words, and a short movement in B minor. Each are given fervent readings.

Alas, in the Sonata no. 2 Rosen’s ruddy tone and elegant phrasing results in an interpretation that, from the get-go, is rather too staid. The ebullient first movement lacks buoyancy and often feels held back. Her reading of the playful second offers a bit more in terms of character and the brooding third is plenty intense, but the finale comes off rather monochromatically. Pianist Artymiw, though, sparkles throughout: she articulates the keyboard writing with sprightly energy and spades of color. 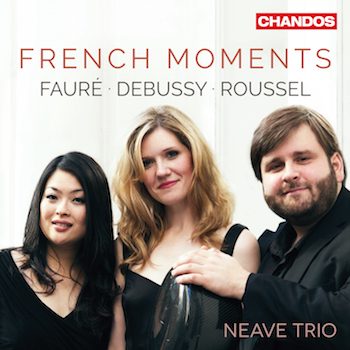 Here’s a welcome concept: pairing Debussy’s sole Piano Trio with something other than the one by Ravel. OK, things aren’t really that dire, but the Neave Trio’s new French Moments might well have gone in a predictable direction and, in so doing, lost much of its charm. Or, maybe not. Either way, what they’ve got here, on their second Chandos album, is wonderful.

Debussy’s G-major Trio is the disc’s centerpiece and is played with a delicate touch. The opening movement simply floats, while the second ambles with silky vim. Cellist Mikhail Veselov delivers melting solos in the lovely third movement, and the finale offers plenty of drama on the way to its triumphant conclusion.

Before the Debussy comes Albert Roussel’s Trio in E-flat, a sweeping, melodious gem of a score whose obscurity is rather mystifying. The Neave’s certainly don’t treat it like a precious relic. Rather, they freely dig into its lyrical extremes, making vivid work of the stirring opening movement and delivering a haunting, introspective reading of the second. Its big finale runs a gamut of ideas, from the songful introduction to an energetic central section and a mysterious, dark coda. The Neave’s play those reflective episodes with warmth and the extroverted ones with ample charisma.

An immaculately-voiced rendition of Gabriel Faure’s rather spare Trio wraps things up. Again, there’s plenty of drama to be found in the Neave’s performance: the first-movement’s climax is lilting but intense while the second’s chromaticism and splintered phrasing make its proceedings sound plenty unsettled; the closing pages offer a mostly-cathartic resolution. And the finale, for its part, is brilliantly spastic.

In all, then, a fresh, enticingly-played release, highly recommended. 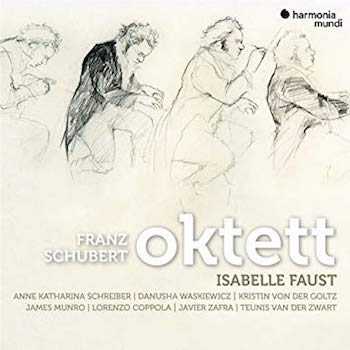 Violinist Isabelle Faust’s survey of Classical and Romantic fare for period instruments has covered quite a bit of ground already (Mozart, Schumann, Brahms, etc.). Now it’s arrived at Schubert, particularly his Octet in F (D. 803) and a pair of minuets.

To be sure, Faust and her gang (which includes clarinetist Lorenzo Coppola and hornist Teunis van der Zwart) get a lot of things right. Intonation is true. Dynamics and articulations are all carefully and consistently executed. The Octet’s second-movement Adagio passes by like a gorgeous chimera, soft-textured and lush. Its Minuet is, likewise, wonderfully elegant.

But the whole reading, to these ears at least, is a bit too alembicated. The strings – especially Faust’s prominently-placed fiddle – often sound raw and thin. They’re not helped by the (comparable) resonant warmth of winds and horn, which only serves to accentuate the strings’ chilliness.

Interpretively, too, things are fussy. There’s lots of rubato throughout, which in and of itself is fine, but here it gets in the way of the music’s momentum. Moreover, the ensemble’s habit of realizing just about every dotted-eighth/sixteenth pattern with dynamic swells gets queasy fast. As a result, listening to the first movement (and the body of the finale) is kind of like driving down the Pike during rush hour: all starts and stops, and it’s only a relief to get to the end in one piece.

Even when things are rightly spirited, as they are in the jaunty third movement, the ensemble’s sonority is too brash for comfort. And those charming variations in the middle, well, here they come off as mannered and exaggerated.

The two short minuets that round out the disc fare rather better (the short last one is particularly sprightly), but, sadly they don’t redeem the rest of the CD. 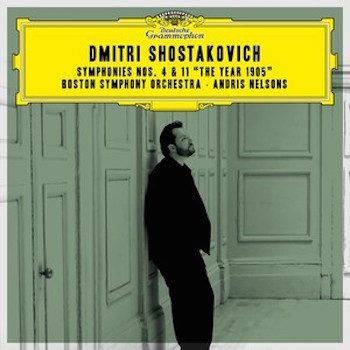 Two of the finest performances Andris Nelsons led with the Boston Symphony Orchestra (BSO) last season were his traversals of Dmitri Shostakovich’s Fourth and Eleventh Symphonies in October and March. Both were taped for the ensemble’s ongoing complete Shostakovich symphony series and are out now on Deutsche Grammophon.

They hold up well to the memories of the live concerts: kinetic, sure-footed, and well-balanced.

The Eleventh is a mix of melancholy beauty – the austere scenery of the sprawling opening movement, the somber lyricism of the funereal third – and savage intensity. Indeed, the latter quality is kept up impressively throughout the reading, both in the music’s introspective moments and its explosive ones (this is especially true of the brutal fugue at the climax of the second movement). The entire performance is also very well-paced: often atmospheric but never at the expense of the score’s dramatic momentum, an especially impressive feat for Nelsons to pull off in the first movement. Throughout, too, the orchestral solos (from principal flute Elizabeth Rowe and principal trumpet Thomas Rolfs, in particular) all shine.

Many of these same qualities – inspired playing, blinding instrumental colors, ferocious emotional intensity – mark Nelsons’ reading of the Fourth Symphony, as well. It’s a weird piece by any measure: a mélange of contrasting styles and textures, tied together by a slashingly dissonant harmonic language. But Nelsons doesn’t shy away from the music’s contradictions or hard edges. Rather, he highlights them, so that the score’s marches, fugues, waltzes, and whatnot slip in and out of each other’s way with electrifying (and sometimes harrowing) results. Sometimes the affect is beautiful (the finale’s coda is ethereal); ultimately the whole experience is exhausting – but then that’s rather how it should be.

Taken with the first two installments of this series, the present release marks the finest Nelsons/BSO collaboration to date. Like the last, it’s exciting and energetic, to be sure, but here there’s a greater sense of nuance and emotional ambiguity than before. Of course, that befits both symphonies – but it also makes this a superb, necessary release.