Toward the Unknown is a well-wrought, well-rendered recording — one worthy of serious attention. 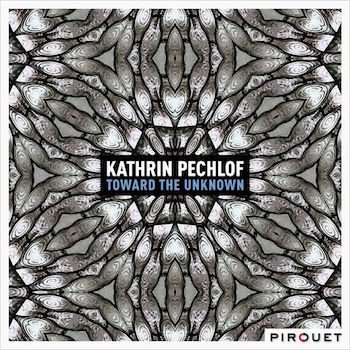 There are generally two modes of expression used by harps in the jazz context. One is the direction followed by Dorothy Ashby or Betty Glamann, who played “inside,” negotiating chord changes in the standard repertoire. The other sort of playing is represented by Alice Coltrane or Zeena Parkins, whose playing is either largely modal or not specifically tonal and more about sound, not notes. On this album, Toward the Unknown, the harp actually skirts both of those directions, striking out in a direction that necessitates the chops of the first and the exploratory propensities of the second.

Kathrin Pechlof is the harpist, with Christian Weidner on alto sax and Robert Landfermann on bass. While it is called the Kathrin Pechlof Trio, there is no obvious leader on the recording. She and Weidner are responsible for the compositions and all three seem equal contributors to the performances.

This is music with constantly shifting layers, often in challenging tonalities that can shift abruptly. In fact, sometimes the musicians sound like three drunks somehow able to complete very complex choreography. Each composition carries its own weight, but there are some fundamental ideas that undergird the album. One idea is to trust the silences. A second idea is that each player can decide to be very loosely tethered to the other two, yet must be able to snap back in a quick second. A third idea is that the timbral potentials of each instrument need to be carefully monitored to remain in sync.

The first song, “Silence is a Looking Bird,” is a tribute to poet E.E. Cummings, as is another tune on the album, “Earth.” The title is a line taken from Cummings’ poem “silence” and, indeed, this piece is as much about silence as it is sound. It’s a finely balanced performance; slightly more transparent than others on the disc because of the amount of silence and because the bass does not come in until halfway through the piece. As we find in many of the songs here, the melody is a fragile creature, not so much an end in itself as a path to other explorations.

“Complex Fugue,” the second song, is appropriately named. The line goes from bass to harp, then sax. Improvised variations ensue, albeit still in a fugal vein. Fragments are picked up and mutate. Sax takes over as the strongest voice and seems to lead the way between sections. There’s a brief section of unison; a complex composed section brings the tune to a quiet close. To my ears, it would take a number of hearings to completely unlock the compositional underpinnings.

“Elegie” is more of an exploration of sound, per se. Pechlof works in extreme registers, utilizing multiple “techniques” to evoke sounds from her instrument. An impressionistic modal feeling mixes with more chromatic harmony. The three move in and out of unison and cadences are toyed with. A B section offers a contrast, yet it remains in the same mood. As we move through the composition, bass movement increases. We hear harmonics on the harp, then glissandi with insistent bass notes. The sax enters with a slightly elaborated melody line. The trio has almost reached complete rubato as it closes with a very slow evocation of the original melody.

The notes reveal that “Weidner wrote the song “Feldfogle” for his partner Kathrin after he examined how the harp is actually put together. “‘The way it functions is sometimes incredibly cryptic. It presents a superb puzzle for the composer to work out.’” This composition contrasts greatly with what we’ve heard so far on the album because it ranges through more disparate emotional states. It starts busily. The harp plays quick glissandi, almost like scratching, with the bass running up and down and alto sax sounding repeated fragments. The instrumentalists move into sounds that are “off” the instruments — sax harmonics, a variety of bass sounds, high end harp. A lot of shifting sections follow, moving through sparser and thicker voicings until the composition ends in a unison line. It wouldn’t seem to have an internal logic, yet one is left with the feeling of a carefully constructed composition.

The theme in “Theme and Variation” is a loosely connected whole tone motif in a wide dynamic range. High bass harmonics enter and the group moves slowly together. Here again, there is much space and silence. Low arco bass plays as sax and harp sound in unison, then break apart. The harp moves ahead alone, playing counterpoint with itself in high register, then moving into a tonic-sounding pitch and then back to a whole tone sound. The group explores this basic tonality together. The texture becomes thicker with harp and bowed bass while alto sax moves freely on the top. To prepare for the ending, the instruments move together, spiking up and back down. Aggressive group movement precedes the close, which ends with a quick, sharp unison.

As noted, the next song, “Earth,” is also dedicated to E.E. Cummings, but I’m not sure to which poem the trio is alluding. There’s a stately theme played by bass and sax in close movement. Meanwhile, the harp is skittish in the background, snapping or generating other noises on strings, as if commenting nervously on the debasement of the earth. The rest of the song features a bass solo. Harp stays in the background, as the bass picks up momentum and comes to a quick stop. Harp ends alone, softly, as if mirroring unsureness about the fate of the planet.

“Toward the unknown” opens with a delicately choreographed statement, which leads to the group playing with the intonation of one note. That expands outward, suggesting slowly walking into dark, unknown territory. Harp opens up on a light note and moves onto a lively melody, which carries intimations of the dark. She is joined by bass then alto sax. The three come in and out of contact, sometimes overlapping, sometimes separate. Then the musical means become more restricted and they totter a bit on the edge. They threaten to lose contact with each other yet they maintain touch — the harp provides the gravity of a repeating pattern. Harp and bass start to move together and are joined by sax. A sparser section follows, with very low register harp and bass. They’re joined by the sax in a pleading mode. Then comes an acceleration into a three-way dialogue: Do they see the light at the end of the darkness and want to reach it more quickly? All three fall into a repeated figure, then the song concludes via a carefully orchestrated ending.

“Versuch” (“attempt” or “effort” in German) seems to be the least composed, most improvised piece on the album. Melodic fragments played together break down into individual statements loosely connected in space — the performers find a tonal center, which then breaks apart. Sax plays a sparse high register melody with bass underneath and occasional harp accents. Sax drops out, leaving harp and bass to carry on an abstract conversation; sax returns and the ensemble finds its way home.

“Made Up Animals” (the composer explains: “anyway, we’re all ‘made up animals”) starts off with the harp playing in extreme registers, low rumblings and then high. Bowed bass sounds, harmonics, and high alto seem to be descriptions of an other-worldly menagerie. “Off” timbres are well matched; there’s a nice sense of the musicians finding each other’s breaths. A more energetic section follows, with sax and harp accents, then the final note with a long sustain.

I listened to the songs on Toward the Unknown several times. My impression is that more hearings would have yielded further fruit. That is the sign of a well-wrought, well-rendered recording — one worthy of serious attention.