Best Food Writing 2017 presents, as the series always has, a veritable buffet of pleasurable reading for the foodie. 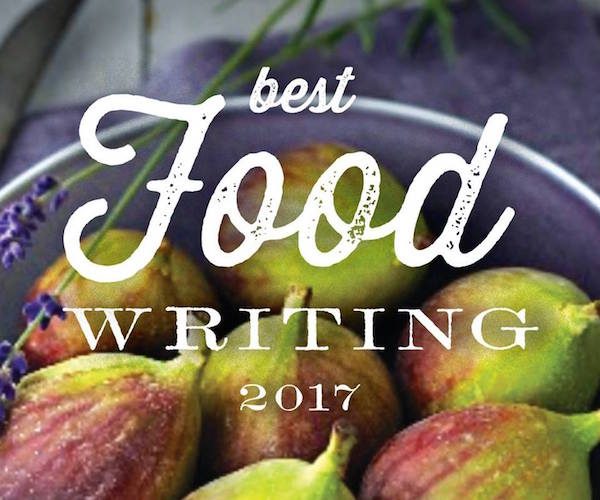 I began reading the “Best Food Writing [Year]” series with the initial volume, in 2000, and it’s a book I buy myself every Christmas, in a brick-and-mortar  bookstore, and then dip into throughout the year. Usually I read, as most people do, from the beginning to the end, but this time around, given the magazine’s deadline constraints, I chose to read the articles that appealed to me the most. My only criteria? The article’s title.

For those of you who don’t know, the “Best Food Writing” series (in paperback) is edited by Holly Hughes, and was established to “bring together the most exceptional writing culled from the past year’s books, magazines, newspapers, newsletters, and web sites.”  Hughes is a writer, former executive editor of Fodor’s Travel Publications, and author of Frommer’s 500 Places for Food and Wine Lovers as well as two books about traveling with children. The first edition (and only the first) had Alice Waters as a guest editor – talk about setting the bar high!

The 2017 edition ($16.99) comprises 343 pages and 48 articles, of which 14 are from online sites, including some I’d never heard of: AVClub, TheRinger, Growlermag, and GoodBeerHunting. There are obviously a lot of lesser-known writers now; there are no excerpts from cookbooks.  The heavy-hitters represented here include J. Kenji Lopez-Alt, Scott Mowbray, Joe Yonan, and Ray Isle. Past editions have included some local writers, and by local, I mean Boston-based. There aren’t any in this edition, but I did discover two articles, one written in Yankee and one about a Vermont brewery, so I’ll consider these local. (NB: Yonan used to write for the Globe’s food section, before departing for D.C.)

The 2017 edition has nine sections:  The Way We Eat Now, Whose Food Is It Anyway?, Foodways, How My City Eats, Updating the Classics, Someone’s in the Kitchen, They Also Serve, Down the Hatch, and Personal Tastes.

The first article that grabbed my attention was “I Want Crab. Pure American Crab.” Maybe it was because I was hungry.  Maybe it was the punctuation. But probably it was the crab, a luxury I don’t eat that often, that roped me in. Written by Bill Addison and published on Eater.com, the nine-page article is a great overview of Maryland’s famous blue crab and related dishes, notably crab cakes. It presents a nice balance between the present day and history, with lots of interesting historical nuggets (like the fact that a food market was established in Baltimore in 1782, more than a decade before the city was incorporated, showing the importance placed on food, even back then). The author returns to Baltimore, his home town, every summer, specifically to eat the local crabs, the only time of year – and the only place – he eats the delicacy. Along with a fellow foodie, he visits several restaurants and crab shacks to gorge on the seafood; his descriptions are truly mouth-watering! He also gives a detailed description of how to dissect and eat a cooked crab.

I love bread. I always have, since spending my junior year in France, where I discovered warm crusty baguettes fresh from the local bakery and unsalted butter. So the second article that tempted me was “Ballad of a Small-Town Bakery,” by Scott Mowbray, published in 5280 Magazine.  I was a bit disappointed in this five-page piece. It started promisingly, with a description of Andy Clark, owner of Moxie Bread Company, making ciabatta, and his assistant preparing koiugn-amann, in a converted 1880s Victorian house in Louisville, Colorado, close to Denver and Boulder. But then the article digresses, to explain Clark’s background and how he established his company in the little town of Louisville, and how it attracted some loyal critics, dubbed “super-users,” who advise on the bakery’s products. It’s interesting, but I was hoping for more about bread-making; the last four paragraphs do go back to the breads, all with sour starters, long rises, and mostly multigrain blends. Maybe he lost me when he admitted he doesn’t bake white baguettes…..

The article with the coolest title, IMHO, is “The Crown That Sits upon Heady Topper.” I was smitten by the title (and a bit unsure of what it meant, but if I had noted the section it was in, “Down the Hatch,” I would have had a clue!).  I was surprised it was about a beer, Heady Topper; I might be the only one in New England who didn’t know about this apparently much sought-after craft beer out of Burlington, Vermont, described as “one of the most iconic American craft beers in history.” Written by Michael Kiser, the six-page article was published on GoodBeerHunting.com.  Heady Topper was invented by John Kimmich over 13 years ago, and went from being served only in one brewpub to being mass-produced, to satisfy demand, only after an almost one-year fight with Kimmich’s wife. I learned about how yeast differs from year to year, so the final product is never quite the same. I also learned about the difficulty of finding the right brewer. Warning: There are quite a few F-bombs in here, which rather surprised me.

The next article that I read, “La Serenata” by Floyd Skloot, appeared in Southwest Review. It appealed to me because I love anything that sounds Italian or French. And I LOVED this article – it was my favorite of the bunch – and found it very moving, mostly because it was about the type of old-fashioned Italian neighborhood restaurant that I wish I had in my town. At 11 pages, it was also the longest, but I didn’t mind at all.

A father’s accident in Long Beach, New York in 1959 leads to an 11-year-old boy being parked in the local Italian joint for dinner while his mother visits his father in the hospital. The boy eventually eats his way through the entire menu, with a few exceptions: “Some evenings were right for heaped, filling plates of Linguini with White Clam Sauce or Lasagna, others for the spicy shock of Sausage and Peppers with Special Marinara Sauce or the solace of Veal Cutlet Parmagiani, the touchstone of Chicken Cacciatore,” which he especially falls in love with. It was a time when mothers actually cooked in the kitchen; he discovered that when he asked the restaurant’s owners for the recipe. “What recipe? We just cooked,” said Frances Russo, one of the Italian owners. Her sons, Paul and Vince, ran the front of the house and knew every customer’s name and preferences. When Skloot returns years later, in 1982 as a middle-aged man, after another family accident, they both immediately recognize him by name. The name means “serenade, you know, like the love song for someone special.” This is Skloot’s serenata to a beloved childhood memory.

Lucky Peach is a quarterly periodical that is pricey read, at $10 a pop. (NB: The quarterly published its last issue this past fall.) So I picked an article that appeared there, “The Piano Man of Zuni Café,” to give me a taste of the late publication. Of course, I’ve read about the famous San Francisco café, opened by Judy Rogers in 1987. Written by Rachel Levin, the four-page article was my least favorite, probably because it profiled a piano player and was less about food (although there were some mentions, including one of a delicious-sounding roasted chicken, “nestled in warm bread salad,” that the restaurant is famous for).  For those wondering what it’s like to play background music in famous restaurants, though, this is the piece for you.  Bob Carrau, the man in question, never eats in these restaurants, just plays the music he loves and observes the crowd.  Hillary Clinton came in a few years back for lunch and unintentionally ended up with two cocktails. (And I learned that Gerald Ford liked his lunchtime martinis, and Teddy Roosevelt drank mint juleps, and let’s not forget that President Obama quaffed the occasional pint.)

Finally, “Why You Should Eat All the Asparagus Right Now,” a short two-pager by Bethany Jean Clement from the Seattle Times, really piqued my curiosity. Why should we rush to eat as much asparagus as we can? Is there a shortage looming or something? (NB: I also LOVE asparagus. And I was still a bit hungry.) This, too, is a paean to family, in this case, a grandmother and a father who died too young.

As a child, the father harvested the asparagus in a local field before going to school, for thirty-five cents an hour. Years later, the author’s grandmother gave her an asparagus knife before dinner and told her to “go cut some grass.” They ate the vegetable simply steamed or sometimes grilled, with a little olive oil. “My dad eventually started grilling asparagus – just salt and pepper and a little bit of olive oil, turned once or twice on a grill until just roasty and a little floppy.” When Clement offered to make a soup, to use up all the asparagus ends she had amassed, her suggestion was met with “undisguised suspicion. But even my dad had to admit that it was good.” Clement provides a simple recipe, starting with two pounds of asparagus and adds the usual (butter, chicken stock, cream, sautéed onion) plus a tablespoon of lemon juice. Her last line is a fitting way to end a year-end article about food:  “Love your loved ones – the people, the vegetables – as much as you can. You never know if this is the last of them for you. Eat all the asparagus.”

So there you have it, like a tasty shrimp cocktail, a succulent half-dozen tempting morsels culled from this year’s edition. From crab to bread to craft beer to local asparagus, via a neighborhood place and an iconic West Coast café, Best Food Writing 2017 presents (as the series always has) a veritable buffet of pleasurable reading for the foodie.

Linda J. Mazurek is an award-winning communications professional, with more than 25 years of writing and editing experience. Blending this with her passion for food, she has written more than 90 articles since late 2006, published both online and in print, including nine in The Boston Globe’s food section.