A hell-for-leather approach to Schubert has its drawbacks; for all the sheen of Juan Diego Flórez’s singing, he doesn’t always seem at home in the music. 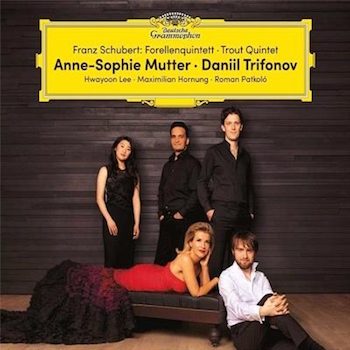 Nearly two hundred years on, Schubert’s Trout Quintet has been played and recorded by countless standing ensembles and pick-up groups. Deutsche Grammophon’s new recording of the piece features one of the starriest of the latter kind, headlined by violinist Anne-Sophie Mutter and pianist Daniil Trifonov; violist Hwayoon Lee, cellist Maximilian Hornung, and bassist Roman Patkoló round out the ensemble.

From a technical angle, they hardly disappoint. Most of the performance glitters. Tempos are often blisteringly fast but the playing and articulation of the ensemble – like Mutter and Trifonov exchanging runs in the first movement – is a thing simply to be experienced, so uniform and brilliant it all so often sounds.

But this hell-for-leather approach does have its drawbacks. While the outer- and second movements benefit most from the group’s sense of momentum, the Scherzo is so manic as to seem skittish and the famous fourth-movement variations come across rather breathlessly.

Still, this is a performance whose ebullience is surely matched by the character (and general spirit) of the music. Artistically, it doesn’t top Christian Tetzlaff’s 2009 recording for Pentatone as an all-star, interpretation in modern sound. But it at least features all the repeats in the finale and the ensemble playing is basically faultless (a few of Mutter’s by-now-patented slides into notes notwithstanding).

Along with the Trout Quintet, Mutter, Hornung, and Trifonov turn in a nostalgic account of the “Notturno” Trio (D. 897), one that’s marked by dusky strings countering Trifonov’s bright-toned keyboard playing.

And the album’s filled out with a pair of violin-piano arrangements of Schubert songs. Mutter’s totally in her element in Ständchen, her double-stops perfectly weighted and the melodic line spun out with effortless beauty.

Then there’s the Ave Maria. It’s hard enough not to hear this piece as cliché, generally. When played with the exaggerated intensity Mutter brings to its first half here, it’s next to impossible. At least the middle section is lighter, more innocent. Trifonov serves as the brilliant, understated accompanist in both. 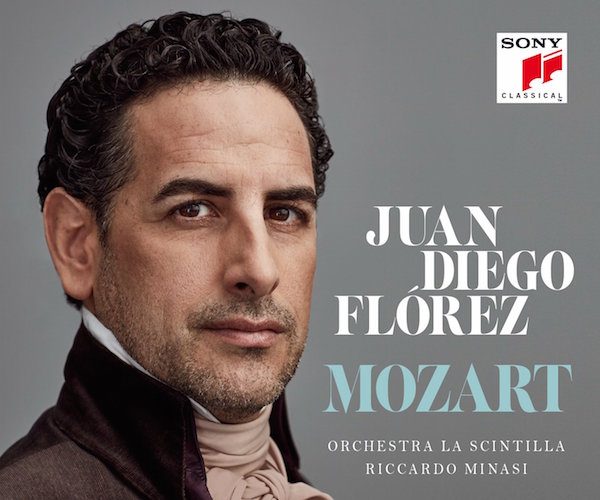 It’s perhaps somewhat surprising to consider, but tenor Juan Diego Flórez has never recorded a Mozart album until now. A singer of real athleticism and charm, Flórez is rightly known for his charismatic performances of Rossini, Donizetti, and Bellini. How does this new disc, simply titled Mozart, fare?

From a technical angle, it’s all quite good. He spins out the florid writing in “Fuor del mar” (from Idomineo) with consistent articulation and commanding tone (even nailing a high D near the end). Ditto for “Si spande al sole in faccia” (from Il re pastore). A pair of arias from La clemenza di Tito – “Del più sublime soglio” and “Se all’impero amici dei” – are likewise fresh and relaxed.

But for all the sheen of the singing, interpretively, Flórez doesn’t always seem at home in the music. His two German-language arias – “Dies bildnis ist bezaubernd schön” (from Die Zauberflöte) and “Ich baue ganz of deine Stärke” (from Die Entführung aus dem Serail) – lack the warmth and stylistic comfort that certain tenors (like Hermann Prey or Peter Schreier) brought to this fare. And even in the brilliantly-sung excerpt from Idomineo, there’s a strictness and straightness to the singing that one would like to hear relaxed.

Still, there’s no denying the power of Mozart’s best moments (the Tito arias and a pair from Don Giovanni: “Il mio tesoro” and “Dalla sua pace”) and the album closes with a wonderfully inviting account of the concert aria “Misero! O sogno.” Here, Flórez is at his best, singing with intelligent rhythmic flexibility and noble tone.

The Orchestra La Sentilla and conductor Riccardo Minasi provide a vigorous accompaniment throughout, sometimes a bit overdone (“Fuor del mar” comes across a bit shrill), but never sleepy. Indeed, this is Mozart playing that’s plenty punchy and full of life, which, like in the Schubert above, is surely preferable to the opposite approach.