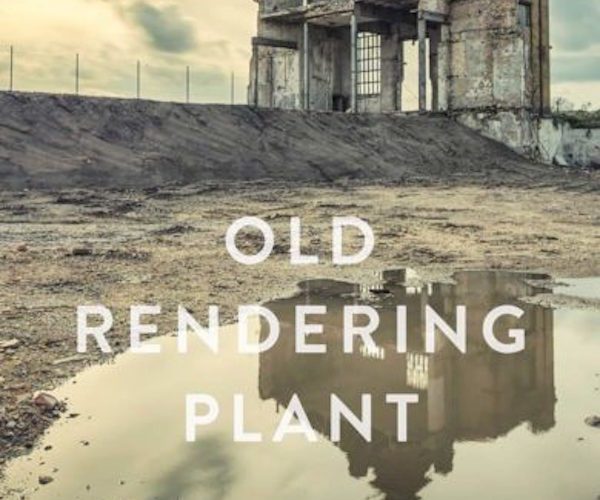 Although Wolfgang Hilbig (1941–2007) had toward the end of his life won all major German-language literary prizes, he is still unknown to most American readers. Thanks to Two Lines Press and two recent bravura translations by Isabel Fargo Cole, the East German–born author’s audience is sure to grow. But by how much, given the preference on this side of the Atlantic for easily digestible narrative? Hilbig’s prose demands sentence-by sentence commitment. It gravitates to the dark and dense, and occasionally surreal: transforming metaphor to substance and back again.

Old Rendering Plant, now out in English translation, originally published in 1991, encompasses all these qualities in a non-linear flow of only lightly fictionalized memory.

“I recalled a brook outside town whose current, strangely shimmering, sometimes milky, I once followed for miles all autumn or longer, if only hoping to emerge one day from a territory confined, I’ll admit it at last, by the bounds of my weariness.” Thus the nameless narrator, who is at times heard from as a boy, at times as a youth, and fleetingly as a man perhaps in his thirties who has never managed to leave the town and landscape that provoke in him dread and revulsion, but also curiosity and a rebellious fascination. In fact, he never even manages to completely leave the house he was born in, despite feeling almost no connection to his faceless family, who are depicted as a gathering mainly occupied with listening to radio reports of the ‘vanished,’ of ‘missing persons,’ disappearances never discussed nor questioned. “I took it for granted that those who had vanished went on existing in some fashion, the proof of that being that, as I had heard, those who still asked after the vanished suddenly went missing as well.”

The boy spends his afternoons, twilights and evenings following that brook, against all warnings. On each foray he pushes a little way further into a decayed post-industrial landscape swallowed by vegetation. Loathe to return to the lamplit rustling circle, he stays out increasingly late, compelled to continue while repelled by all that surrounds him. “The willows…seemed to metamorphose into fantastic creatures, the spawn of some freakishly fertile subsoil, ugly crippled excrescences that through their very degeneration had come into power and evil.”

On returning home the boy lies about where he’s been. He is punished, lectured at, sent to bed without supper, but that is infinitely preferable to being ‘sent to bed, as in the old days…while the evening was still bright… I feared the nights spent half in a sun-flooded chamber.” Not that eventual darkness brings much relief, for “a car with glaring headlights would turn onto our street… A black geometric figure shaped like a gigantic cleaver—I took it for the shadow of an advertising column which the car had to pass—moved in the opposite direction from the window across the ceiling, gliding through the room with a casual flourish, a razor slash from left to right, from nape to front, for I, in nightly anticipation of its appearance, was incapable of turning to my other side.”

In other words, the boy suffers from chronic anxiety and insomnia, and his older narrating self retains total recall of certain sensations and anguished emotions of childhood that most of us, on reaching adulthood, are happy to repress.

Presumably it is passages like the one quoted above, with its swinging giant cleaver, that prompted some reviewers to liken Hilbig to Edgar Allen Poe. Despite some similarities of mood—sour emanations from dour places—in the two writers, the comparison is misleading. Whereas Poe wove tautly structured, gruesome morality tales, Old Rendering Plant depends on equivocation, ambiguity, and uncertainty—the barely apprehended. Poe’s world is populated by willful antagonists who fall victim in ghastly ways to their own excesses and weaknesses; Hilbig’s is scarcely inhabited. The isolated narrator perceives occasional cloudy, shape-shifting groups from a distance. There are no ‘characters.’ The narrator presents himself as a preternaturally sensitive investigator of a forbidden landscape and a half-hidden past, without affections or relationships. There is neither love nor loss, no Eleanora. The pendulum is only shadow-play—but terrifying, nonetheless.

What is it, then, that drives the narrator to explore abandoned, dangerous places at night? And what, if anything, does he eventually discover?

As a child, he struggled to articulate his reasons. “How could I have conveyed that I couldn’t forgo the experience of the hour that most entranced me, the hour of transition, where boundlessness held sway before the onset of night, manifested in unreal hues and noises whose causes were lost…in smells from fissures and shifts in the crust…the hour when I became invisible, guided only by scents whose signals no longer brushed my brain but coursed from my senses straight to my limbs…” Finally he grows sick of words. “Hadn’t the term earth arisen solely on the basis of an embarrassed convention…? Wasn’t the use of substantive nouns nearly always a silence about the true substance of things?”

He’s drawn to the transition-time. To disembodiment. And then, there’s the lure of the heart of darkness. He stumbles at first on hard-to-identify remnants of walls, ramps, disused railway beds, half sunken in the ground. Gradually he begins to recognize—in a way that’s as much an act of awakening consciousness as it is physical exploration—actual landmarks. The ruins of an old mill, where violent ‘Easterners’, refugees, are said to still be holed up. The ruins of a coal factory. And finally, like the dreaded and inevitable climax of a nightmare, the old rendering plant, a hell on earth. From hiding, the narrator witnesses ‘a bustle of shadowy uniforms, dragging the creatures from the gaping hold of a filthy cattle car… it was done by plunging, flashing, dripping iron hooks into the animal’s sighing flanks, and the animals jerked and spread their unwieldy legs across the platform, pigs, sheep, cows, all in their death agony…”

It’s this still-functioning rendering plant, called Germania II after a nearby coal mine, that steadily feeds poison into the air and water and ground of the narrator’s world. The stream’s reeds drip with beads of tallow, those aforementioned willows are unnaturally well nourished by the offal-rich stream. Completely identifying with underlying reality, the narrator, when asked what trade he’ll apprentice to, answers that he wants to work in Germania II. His outsider status is now complete. Getting drunk in the pub at the table of the Germania II men, butchers and fire-stokers, he vividly imagines their lives. “Oh, they were implacably aggrieved by the squalor underfoot, by death’s awful incompetence, by the disgraceful forbearance in the depths below them, by the bad decisions made from cowardice, by the corruption of the material down there…” But even this society is closed to him; the men drift away, or never were, and the narrator continues his incessant walking.

Wolfgang Hilbig was born into a working-class family in a small Thuringian town on the border with Saxony, considered ‘the East.’ His father disappeared at Stalingrad when Wolfgang was a year old. He worked for some years as a stoker at a local coal-firing plant, a generally despised job which he preferred because it afforded him long hours alone. It was only toward the end of the 1960s that he had what might be termed a calling—he would devote his life to writing, specifically to poetry. Although his gift for language and originality of mind were soon recognized by peers, the GDR authorities refused to publish his work. It was only in 1979 that the S. Fischer Verlag in the West published his first works, and his reputation began to spread. He was arrested and imprisoned by the regime. In 1985 he was able to move to West Berlin. After his death from cancer a friend remarked, “He was easy to get along with, hardly let on how well read he was, and had a boxer’s nose, because he was a boxer in younger days.” (Source: German wikipedia.)

When Old Rendering Plant first appeared, some reviewers rushed to explain it as an allegory about the crimes and fall of the East German regime and, by the same token, of the Reich that preceded it. But this is an intention that Hilbig himself vehemently denied. It’s true that among the depictions of an ever-decaying land there are allusions to political corruption, and that the book ends with a haunting, truly apocalyptic vision of literal collapse and destruction. However, I’ll take Hilbig at his word. These 118 pages reach far beyond any metaphor of twentieth century history. Hilbig rages and presses against the limits of language. (Commentators’ calling his work ‘Joycean’ surely pleased him; a Joyce quotation serves as epigraph.) There is the ostinato, personal ache of lost innocence. And once Gaia, the helpless mother, is revealed in her terror and corruption, existence itself is on trial.

Readers who embrace the challenge of following Hilbig’s footsteps in Old Rendering Plant will find their vision of the world we live in at least temporarily changed. Or perhaps permanently. Images, like tainted water, leave indelible stains.