You are here: Home / Books / Book Review: “Stigmata of Bliss” — From the Master of the Tersely Disquieting

Klaus Merz’s cunning, compressed prose invites us to listen for the sounds of the inexpressible, the other side of life. 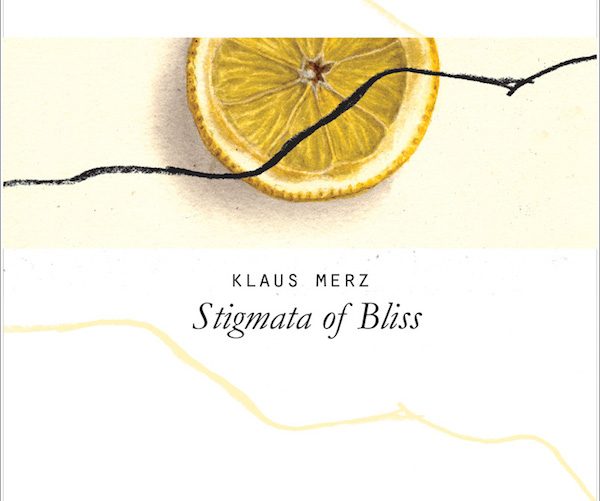 The most generous writers give readers something to do, respecting their imaginative capabilities. The least generous ones explain too much, reflecting credit on themselves. The Swiss writer Klaus Merz has engaged his readers in such a way that he is beloved among Germanophones who are up for a challenge: his 1997 novella Jacob Asleep is regarded as a contemporary classic. At the time of its publication, three volumes of Merz’s collected prose and poetry had already appeared; today there are seven such editions in print, establishing Merz as a master of tersely disquieting short prose fiction and lyric poetry. In his poem “Outlook,” he envisions a season when “it will be bright and May” and then reflects, “well-being will seize me / already I am afraid / not to be up to it.” The reader is beckoned not only to acknowledge the breach between brightness and dread, but also to discover a dolorous pleasure there.

Now, Jacob Asleep and two recent novellas, A Man’s Fate and The Argentine, have been translated by Tess Lewis for curious Anglophones and published together as Stigmata of Bliss. Merz originally assigned Jacob Asleep a subtitle: Eigentlich ein Roman or “Actually A Novel,” a signal that this prose has devised its own genre: fictional autobiography, a form that acknowledges the inventiveness of memory and its affinity to lyricism. Its narrator Lukas Renz (a near anagram of Klaus Merz) recalls his youth among a family that lives with lingering sadness after the demise of his older brother Jacob, dead at birth. The father runs a bakery at their house and collapses in the street from epileptic fits. The depressive mother requires treatment at a sanitarium. A hydrocephalic little brother is taunted by neighborhood children. Lukas says, “The hardest times for us were the relatively painless ones. We could not endure the latency of new wounds and immediately turned to the suffering of others, which was still much more difficult for us to bear than our own misery.”

Yet there is a lightness in Merz’s telling, abetted by brisk candor, evocative description, and a spareness redolent of a matured urgency. There is also affection for these hurt lives and their habits, a sweetness in the speaker that rounds off the edges of his own tough recognitions. How did Jacob die? “The doctor had fumbled around roughly and clumsily in my mother’s wide-open pudenda and broken the baby’s neck at birth. With his metal forceps.” For Merz, the purpose of language is to confront and name the actual, no matter how traumatic. As in poetry, the reader’s eye is required to make nimble but achievable leaps between paragraphs that often comprise just a sentence or two. The swift movement from one striking observation or action to the next results in an evocation of the density of experience. Simplicity compiles complexity.

The second novella, A Man’s Fate, published in 2008, imagines the final hours of a man gone missing. Peter Thaler, a middle-aged philosophy teacher, is facing uncertain employment and perhaps a chronic illness. He packs some honey and a few lemons in his knapsack, boards a train with a one-way ticket, and hikes up to a hut in the Alps. But this is not a story that focuses on character development, psychological analysis, or vivid plotting. It is about the storyteller’s articulation of fate itself, which, in this case, takes the form of Merz’s aptitude for measuring out limits. The unnamed speaker notes the mundanities Thaler encounters along the way toward his icy end. Thaler’s fate, in fact, is a failure to disappear, given that the dream-mode of his disappearance is now forever present in language.

Merz has spent years telling us that our sufferings are here to be exploited, recycled, and even rejoiced in as mordantly superb tales. “ ‘Help is coming from Bregenz,’ Thaler had read in Kafka,” writes Merz. “The sentence remained in his mind, enigmatically isolated. He believes more deeply in Kafka’s prose than he does in the dear Lord …” And so does Merz.

Finally, there is The Argentine, a story about Johann Zeiter, who leaves his Swiss girlfriend after World War II to travel to Buenos Aires and work as a gaucho. Johann’s granddaughter has recounted the story to our unnamed narrator, and for a mysterious reason he is compelled to retell it. It turns out that Johann develops an allergy that derails his gaucho aspiration. He becomes a tango dancer instead, and after a few years he returns to marry his sweetheart and work for the rest of his life as a schoolteacher. The Grandfather’s simple life is modestly elevated to our attention:

Tell stories and let stories be told. In fact, Grandfather explained, at this point he preferred simply to listen and continue the dialogue internally. Sometimes just reading the paper every day was enough to satisfy his need for words. In any case, according to his cautious diagnosis, there are not enough people in the world who listen. Almost everyone feels compelled to offer self-descriptions that are nothing more than rehashings of what is already known. Without any self-determination. Only in dreams to people sometimes leave their telephones behind and live, to their horror, a life without a net. Perhaps that is why they no longer value their dreams properly.

Merz’s cunning, compressed prose asks us to dismiss the bulked-out rehashings of conventional prose fiction – it invites us to listen for the sounds of the inexpressible, the other side of life. The dark and bright aspects of life are yoked together in the collection’s title Stigmata of Bliss which, in Jacob Asleep, takes the form of the hot chafing on the children’s legs, the result of ecstatic rides on their uncle’s motorcycle. Until now, only one of Merz’s children’s books (Ken’s Great Adventure) and a translation of new poems (Out of the Dust /Aus dem Staub, 2011) have been available to English readers. I hope more titles are forthcoming, especially through Lewis’ sensitively attuned renditions.

Ron Slate has published two collections of poems, reviews books at a site called On The Seawall, and is a board member of Mass Humanities. He recently co-authored a book with his daughter, Jenny Slate, called About The House via the generosity-based publisher Concord Free Press.