You are here: Home / Books / Book Review: “The Hunger Saint” — Courage in a World of Pain 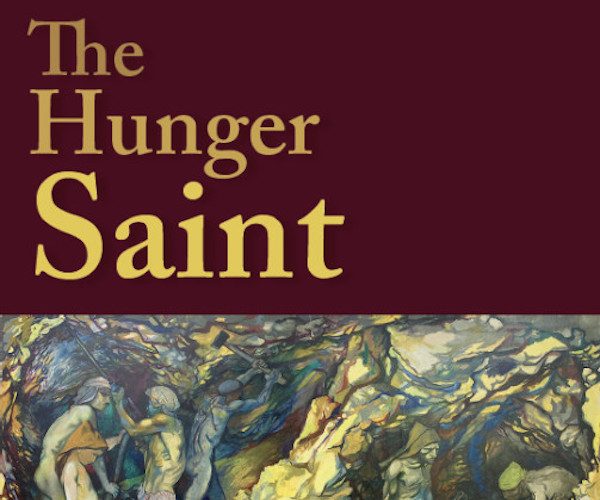 The novella has become a sadly underappreciated vehicle of fiction, a bit of an orphan. Literary mags publish short stories, and full-length hardcover novels sport a price tag of $25 to $35. Perhaps publishers fear charging book prices for 80 to 100 pages will meet buyer resistance or that, because the form is so rarely seen, its merits are unclear. This is an unfortunate development. How often have we read 800 page novels and felt that they could easily have been 500? Self-editing is becoming a lost art: writers cannot restrain themselves, and agile editors, from whom they could learn a thing or two, are a thing of the past. The truth is, writing fiction is a matter of information management. Theodore Dreiser would routinely submit 1000 plus page manuscripts, but when editors had the good sense to cut him back he felt wounded, as if his genius had been eviscerated. The fact is, less is often more; at times the novella is the right length to convey a narrative’s feelings, mood, and meaning.

Olivia Kate Cerrone has written a dynamic novella centered on the lives of impoverished Sicilian boys who are forced, under a system of legalized child labor, to work in the sulphur mines. By signing a soccorso morto (literally a “dead loan”), a boy would obtain cash for his family by agreeing to a life of underground labor. Set in 1948, when Italy was economically ruined after the Second World War, twelve-year old Ntoni, whose father had died, is indentured by his mother: it is the only means of keeping her and two younger children afloat. The job’s danger is apparent from the beginning: a mine is under the continual threat of sulphur gas, which can easily explode. Ntoni joins other boys as they “…clawed at the subterranean walls with their mattocks and picks…(in) an unending clink and scrape…through the tunnels.”

Cerrone’s words conjure up heat and dust; every time Ntoni ventures into his purgatory, we can smell the sweat and discomfort. Pain and despair are palpable in every scene.

Hope appears when the mine’s mechanic, Ziu Peppi, takes Ntoni under his wing. At first it seems the boy will be able to leave the mine to work in a shed above ground where the tools and machinery are repaired. But Ziu Peppi has come up with an ambitious plan to run away to France for a better life. He has hidden away an envelope containing money and documents  and tells Ntoni  he can provide him with papers as well. The two conspire to leave, but Ntoni must make a tortorous moral decision; if he runs away, his mother will be forced to repay the loan, which would push her into penury and homelessness.

Ntoni struggles to save himself yet not, at the same time, cast his mother, sister, and younger brother into an abyss: “An image of oceans entered Ntoni’s mind…The sea extended all around him, fitting against the horizon. Its calm ink-tipped waves alternated between hues of cerulean and indigo, as he’d seen portrayed in various drawings from a few maps and posters hung in the cafes.”

Then, one day in the mine, circumstances change: “…as he crawled beneath the low rock ceiling of a narrow tunnel, dragging along a basket of tools, the mice began to charge at him. Dozens scurried past his hands and limbs, rushing out from the bowels of the mine. The creatures forced him to pause, unnerved. An endless pinch of tiny-clawed feet scrambled over his skin. Their frantic squeaking made him sick with knowing.” It is a mine cave-in; the low rumbling and then the shaking walls give way to a thunderous roar. Many of the miners are killed or trapped, but Ntoni makes his way out in amid the confusion. His means to break away from his miserable existence is clear: appearing to be dead is the passport to a new life.

Cerrone tells this salt of the earth story in raw, blunt terms, via a naturalistic mode worthy of Emile Zola (as in works such as Germinal, his masterpiece about striking coal miners). She digs beneath the facts of exploitation to dramatize visceral sensations and emotions. The Hunger Saint creates a vivid world of appalling poverty and cruelty. But there is mercy: for this boy, slavery will not be destiny.

Thomas Filbin is a writer, teacher, and lawyer. His reviews have appeared in the New York Times, The Boston Globe, and The Hudson Review.