You are here: Home / Books / Book Review: “Caring for Red” — Living out the Last Act

This is a moving yet quite practical book about caring for an aging parent. 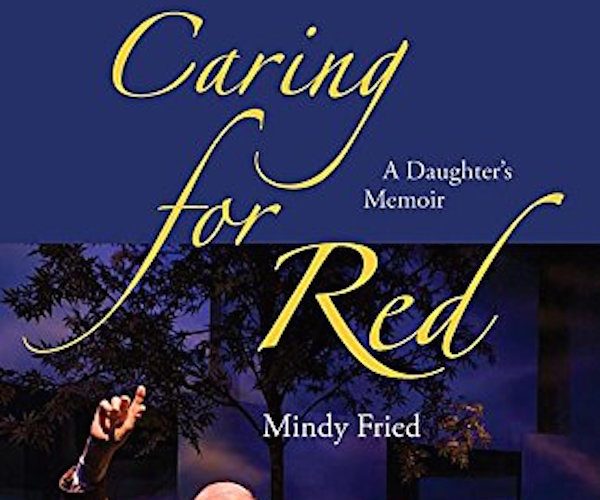 The premise is perfect for your standard geriatric TV comedy. An actor in his late 90s — who had performed on stage before appreciative audiences, had been ordered, twice, to testify before the House on Un-American Activities Committee (HUAC), and had corresponded with Albert Einstein — sees himself as being forced to spend his last days in an assisted living facility with “regular” old people. Friendly though his neighbors may be, the actor and agitator wants no part of it, or them.

The script would write itself, the genial laughs would be many, but playwright and performer Manny Fried (whose nickname was Red) was not amused by the theatrical set-up. After all, he was the man who had to spend his last year at Harmony Village, an assisted living facility in his hometown of Buffalo, New York. He died there in 2011 at age 97.

His life is chronicled in a moving yet quite practical book by his daughter, Mindy Fried, M.S.W., Ph.D., a sociologist and co-principal of Boston-based Arbor Consulting Partners. She is also the author of Taking Time: Parental Leave Policy and Corporate Culture. Through her Hoopla Productions, Fried produces local music and arts festivals such as JP Porchfest. During her father’s last year, as his health worsened, Mindy and her older sister Lorrie, despite their geographic separation from him, were his caregivers.

The challenges of long-distance caregiving, such as navigating the senior living landscape with its complex financial issues and helping an aging parent face his or her approaching death, shape the practical side of Caring for Red. Mindy’s informed and intelligent testimony will provide comfort and guidance to any adult who is in a similar situation. It is not easy, nor are there many happy moments, but her advice — the result of hard-won experience — is invaluable.

I spoke with Mindy Fried about what she learned in taking care of her father in his final years. “People want to maintain a life of dignity for their parents without imposing their own needs,” she said, “but at some point it’s simply unsafe for the parent to live alone.” Despite the bleak prospect for a loved one of living in a senior facility, personal comfort and convenience are not always the most important considerations. “Safety comes to the forefront in these decisions,” she insists, “and the precipitating factor is usually a fall.”

Mindy recommends speaking openly about these end-of-life issues when the parent is still reasonably healthy. And visiting assisted living facilities a number of times because it can take time to break down initial biases. She is forthright in the book about the challenges of trying to persuade her father to live at Harmony Village: “Unconvinced, he envisioned imprisonment, while my sister and I were beginning to see salvation. We realized he could no longer live independently…. The problem with any institution is that it isn’t home.”

The other compelling part of the book is the story of Red, a remarkable man who was a hero to many and a bane to some. The son of Hungarian Jewish parents who met in New York City, Emanuel Fried became a staunch leftist after studying Marxism as an adult at the Communist-associated Jefferson School. He took his politics very seriously: he worked in the vat room at DuPont Chemical in order to understand first hand the harsh conditions factory workers had to endure. Eventually Fried became a well-known labor organizer – “an important, even pivotal, figure in the labor history of Western New York” is how the Buffalo and Erie County Historical Society describes him today. His pro-union activities soon attracted the attention of the HUAC. Twice Fried was ordered to testify, and he refused both times, citing the First Amendment. His one-time correspondence with Einstein was to thank the physicist for taking the public stance that people should refuse to testify on First – rather than Fifth – Amendment grounds.

Throughout the ’40s and ’50s, Fried organized unions and led strikes. But he eventually left that world to pursue his passion for acting. Moving to New York City, he joined the Group Theater, working with the respected director Elia Kazan (who later named some of Fried’s colleagues to the HUAC). Fried began performing in, as well as writing, a number of plays. He continued to act and teach throughout his life, making his last appearance on stage at the age of 95.

Though Mindy recalls her father fondly and with pride, his labor and theater pursuits were hard on the family. For all his dedication to a common-man ethos, Fried married above his social station; his wife Rhoda came from a well-to-do family and was herself a talented songwriter and artist. However, thanks to the HUAC episodes, Fried lost jobs as well as friends. Rhoda’s life trying to maintain the family was frequently an unhappy one.

The book’s sense of bitter humor is epitomized by a telling reunion in the assisted living facility. Mindy’s father, seated in the dining room at Harmony Village, is accosted by a blind man in an electric scooter. It is Bob Swados, a lawyer friend of Fried’s back in the day; their wives were close and Mindy and his daughter Liz were best friends. But after Fried was implicated by the HUAC, a frightened Swados forbade any socializing between the families. Decades later they reconnected near the end of their lives, the fear that drove them apart a senseless antique.

Mindy Fried will be speaking about Caring for Red at the place and dates below: