The Unknown Kerouac is good for the advancement of Kerouac scholarship, but the book hardly justifies, for the average reader, its price and size.

It’s possible that one day, once I have gone over to the other side of the darkness to dream eternally, these things, stories, scenes, notes, a dozen impossible novels, half finished, will be published and someone will collect the money that was supposed to come to me. But that’s if I am a great writer before I die.

When Jack Kerouac wrote these words in February of 1951, his legacy as a “great writer” was far from certain. The 28-year-old had published an ambitious novel, The Town and the City, but the book had failed to find an audience, selling poorly. Undeterred, he redoubled his writing efforts, holing up in a studio apartment on West 10th Street in New York that he shared with his then-wife Joan Haverty. The most famous product of this stretch of writing was the 125,000 word, 120 foot long “scroll” manuscript that would become his landmark novel On The Road, finally published, albeit in a significantly edited form, in 1957. The scroll manuscript and the circumstances surrounding its creation have since taken on mythical status for Kerouac aficionados, who were treated to the publication of the scroll version of On The Road, edited by Howard Cunnell, in 2007.

In the decade since, there has been a boom in the publication of Kerouac’s ancillary works. Academics and editors who have the blessing of the Kerouac estate compile unpublished works (mostly found in the Berg Collection of the New York Public Library) and package them for publication. The noble reasoning that drives such work goes something like this: serious critical study of Kerouac requires textually sound editions of his work. In the case of The Unknown Kerouac, recently published by Library of America, ancillary, incomplete writings that were never meant for publication are collected to “provide missing links in Kerouac’s path to a wholly new style of storytelling,” as the press release claims.

The “missing links” included in The Unknown Kerouac, edited by Todd Tietchen of UMass Lowell, are not noteworthy in their own right. Rather, they take on added intrigue when read in relation to Kerouac’s extant, complete works. For instance, the prescient words quoted at the top of this review are taken from The Night Is My Woman, the 57-page manuscript Kerouac wrote at West 10th Street just prior to beginning On The Road. Even more intriguing is the fact that this manuscript, composed when Kerouac was struggling mightily to “write with 100% personal honesty,” was written entirely in the French-Canadian patois he spoke while growing up in working-class Lowell, Massachusetts. Both The Night Is My Woman and Old Bull In The Bowery, another work originally written in French, have been translated by Jean-Christophe Cloutier, who based a great deal of his work on Kerouac’s own aborted efforts at rendering the texts into English. Cloutier’s notes, which trace the origin of specific words and phrases of Kerouac’s mature writing to the language of his childhood, help to validate claims made in recent years, most notably by Joyce Johnson, of Kerouac’s status as a “Franco-American writer.”

The works themselves leave much to be desired, as is to be expected of such fragments. But unlike in previously published pieces of Kerouac’s juvenilia and other “lost” works, even minor intimations of the “spontaneous bop prosody” to come in his mature writing are hard to glimpse. Without any of the sensory, free-flowing narration that makes Kerouac, well, Kerouac, the translations make for pretty bland reading material. The Night Is My Woman’s significance, then, is chiefly biographical, for its depiction of Kerouac’s life with his family after they moved to New Haven, Connecticut in the summer of 1941. Old Bull In The Bowery’s biographical significance is, by contrast, tempered by fictionalization. It is an attempt a kind of Beat origin story, wherein the future heroes of On The Road, here called Dean Pomeray and Ti Jean Duluoz, first meet as children after parallel road trips taken to New York with their respective fathers. Aside from the intriguing concept, Old Bull In The Bowery has little merit to sustain the 70-plus pages it occupies within The Unknown Kerouac, but it remains as a testament to the extensive work Kerouac underwent in order to build out the “Duluoz Legend,” his name for the mythologized autobiographical enterprise of his fiction.

While the two “lost novels,” the anchors of The Unknown Kerouac, are inherently lacking, the lesser materials of the collection are not, as one might expect, merely thin gruel. Most of these works are drawn from journals, and some passages were previously published in 2004 as part of Windblown World, edited by Douglas Brinkley. Unique to this volume, however, is “Journal 1951,” which tracks the pivotal time Kerouac spent recuperating from a bout of thrombophlebitis in a Bronx VA hospital. It was during this time that he decided to “make it a rule to compose willy-nilly, swift, ungrammatical, like a dazed man writing down the dream from which he just woke…instead of getting hung up on sentence structure before the baby’s even born.” In an included transcript from a 1963 interview with John Clellon Holmes, Kerouac himself highlights the pivotal nature of that hospital stay:

I had time to think at last without interruption and unfolded my secret desire in writing at last:— to tell exactly what happened and not worry about style but only worry about completeness of detail and the hell with what anybody thinks.

Passages like these help to chart the development of the “Spontaneous Prose” style that Kerouac pioneered throughout the 1950s, and put on display in books like The Subterraneans, Visions of Cody, Doctor Sax, and Big Sur. Other passages highlight the sensory impetus for his writing, uncovering the birth of the technique of “sketching” and documenting crucial moments of exposure to avant-garde jazz. Readers who are familiar with Kerouac’s 30-point “Belief and Technique of Modern Prose,” will delight in seeing many of the tenets later included on that list in their original autobiographical context, tied to the distinct moments in Kerouac’s life that inspired them. 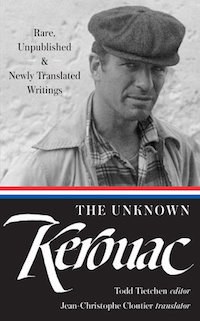 Rounding out the book are excerpts that vary greatly in style and focus. There is a college-aged Kerouac’s impression of a Frank Sinatra concert, a collection of “Riddles” that stylistically presage the haikus he would explore later in his career, and a record of “Private Philologies,” which document the degree of careful etymological study that went into the nascent writer’s craft. These pieces are intriguing in their own right, and show the variety of forms Kerouac experimented with early in his career. But while it is the nature of a collection like The Unknown Kerouac to be disjointed, the included fragments make for an uncomfortable, choppy reading experience. Though largely organized chronologically, the final section of the book inexplicably jumps back to a 1945 novel-in-progress, “I Wish I Were You,” written in a stilted, derivative style. Just as we are getting something of a sense of Kerouac’s development into a mature, original writer, we are taken back to this piece of juvenilia—the wind is taken out of our sails. It is a curious note on which to end the collection, and raises questions about Todd Tietchen’s editorial approach.

While the publication of The Unknown Kerouac is ultimately good for the advancement of Kerouac scholarship, the book hardly justifies, for the average reader, its price and size. There is much more to be gleaned from a perusal of the body of Kerouac’s work that has already been published, especially the journals and letters. While the prospect of “lost” or “unknown” manuscripts is admittedly enticing, and will surely lead to more editions like The Unknown Kerouac in the future, readers would do well to heed the Kerouac’s own reservations as to the value of “impossible,” “half-finished” works written before he had “gone over to the other side of the darkness to dream eternally.”