Yakovlev’s poems speak to the reader quietly, with assumed familiarity: imagine a friend whose end of the dialogue seems too elegantly composed to let it dissolve in the air.

A couple of weeks ago, I was browsing in a local bookshop and pulled a poetry collection with an alluring title off its dusty shelf. I was about three quarters of the way through the first poem when I realized I was reading the table of contents. Admittedly, some of the titles made pretty good lines, but something seemed to be missing. This lack of aesthetic unity is not all that uncommon in contemporary poetry, which is why it took me a while to figure out what I was reading. That, however, is rarely if ever the case with the work in Anton Yakovlev’s chapbooks Neptune Court and The Ghost of Grant Wood.

What initially drew me to Neptune Court, the Russian-born author’s debut collection, was his light touch — the poems go down like silk — but the surprise is that he’s able to pull this off without gauzy, insubstantial verse. It’s a rare feat. The work is imagistic and slyly humorous. It speaks to the reader quietly, with assumed familiarity: imagine a friend whose end of the dialogue seems too elegantly composed to let it dissolve in the air. The poems lower themselves into loneliness, loss, heart-break, and longing. They are keenly observed, Yakovlev’s eye taking in mundane details that he somehow coaxes into carrying most of the freight. Some of the poems, such as “Grief” (one of the best, incidentally), are almost flash fictions populated by characters who might have been sketched by Edward Hopper. Here’s an excerpt:

She thinks about the
apartment she’ll buy in the Old City. She’ll sit on Walnut Street with a scone,
and watch a security guard in a Phillies visor return a freshly shoplifted shirt
to a huggy waif. In the summer, she will walk down Market Street, drinking
Chardonnay from the bottle, and hope to get arrested, but the cops will only
high-five her.

From here, “Grief” descends, almost like a musical score, into a perfectly pitched ending.

“Cat of Death,” probably based on the true story of a nursing-home pet that always curled up beside someone who had hours to live, is less prosaic and more representative of the collection as a whole.

death has a certain heat, an intensity in the body
fighting the now inevitable
or trying to depart with a last bit of fire

Trains and train stations are frequent settings, as are cars (“Grief” begins with a car that “tyrannizes the overgrown fern on Hillcrest”), intimating a preoccupation with characters who are rootless, restless, aimless. The settings span both coasts but pass the middle of the country by. Yakovlev seems drawn to the alienation pervading heavily populated areas, primarily cities such as Los Angeles and Philadelphia, and secondarily suburban New Jersey.

My favorite selection from Neptune Court is “After Copernicus Street Fair,” a lament inspired by distance and the passage of time, which conspire to separate the speaker from his childhood sweetheart:

Letters from my beloved,
now six time zones way,
get lost on a shelf with video games,
unanswered until it is much too late
and I can no longer find her
in any of the world’s yellow pages.

From this set-up, the poem improvises a conceit — “The graying birds on my wallpaper/followed her mood every day—” which is carried through to what I felt was the most visceral and evocative of the poem endings in the book. I was mildly surprised, in fact, that Harper’s or The New Yorker hadn’t picked up this poem.

My instincts weren’t too far off. “Exorcism,” from the Grant Wood chapbook, made it to a recent issue of The New Yorker.

A distracted Charon,
retired from Lethe,
always picks up the ashes of your diary.

These lines, from the middle of “Exorcism,” demonstrate another of Yakovlev’s strengths: the understated blending of high (an ominous figure from classical mythology) and low; Charon is distracted and retired, perhaps not far from senility. 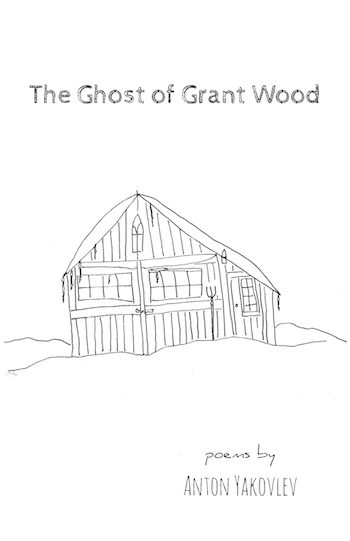 Unlike Neptune Court, The Ghost of Grant Wood is shadowed by the Cold War and Europe’s legacy of World War II atrocities. “The Diner” centers around an apartment complex built over a “demolished labor camp,” while “The Garden of the Recently Executed,” in which a woman goes on dreaming about her husband’s insomnia twenty years after his death, insinuates the consequences of political dissent. These poems also tend to be longer than those in Neptune Court. Perhaps slightly more lyrical, they are almost imperceptibly darker. In addition to the low-grade pessimism of “Exorcism” (“Commission or no commission,/your paintings are full of spiders.”) and the fallout of wars in the chapbook, there is a serial killer in “Nicetown” who stashes the skull of one of his victims in the chandelier (“eye sockets hid behind crystal pendants”).

One of the best in the collection is “The Cupcakes of Newburyport.” The sleight of hand embodied in the title — the poem is hardly innocent or banal — is characteristic of Yakovlev’s magic act: he leads us to believe we’ve picked up a twig that, on closer inspection, turns out to be a snake. But it’s too late; the creature is already in our hands. The poem begins innocuously enough (“Once more were huddled over/ the cupcakes of Newburyport./We’re holding hands, we’re tickling”), but a rude waitress is the first crack in this façade. Others follow, until it’s clear the relationship depicted in the poem is not a healthy one, and there are hints the waitress is right about the speaker, who pines, as the poem winds down, to go back in time:

Nostalgia rains down, superb,
repainting the watercolors
that will never return.

Two stanzas later, the poem ends with a couplet that leaves the air humming.

If these chapbooks and The New Yorker’s imprimatur are any indication, Yakovlev is poet whose work is on its way to a much larger audience.