You are here: Home / Books / Book Review: Two From Andreï Makine — A Matter of Trust

You sometimes feel as if Makine is plagiarizing himself, which is a perfectly legitimate thing for a writer to do, but so many scenes of spring snow and railroad stations and meeting and parting and lack of privacy tend to become clichés even in talented hands. 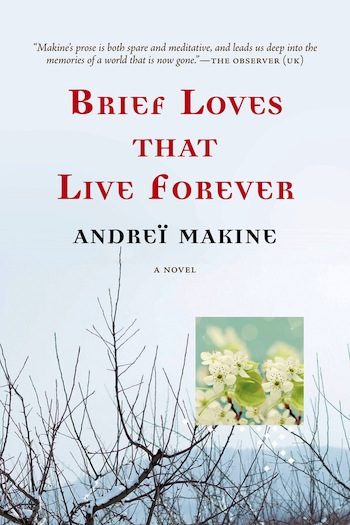 When Dreams of My Russian Summers came out in 1995 in English most people I know were enchanted by this young Russian writer who had gone to Paris to live and who wrote French like a native. It was his fourth novel and his breakout book; his precise language and his observations and insights were compared to Proust, the book had echoes of Nabokov’s masterpiece memoir, Speak Memory, and he began to be mentioned in speculation about who would receive the Nobel Prize. Soon after Dreams he won some prestigious French prizes, published more books (a few under the name Gabriel Osmonde) and has continued publishing in French to great acclaim under the name Andreï Makine, which is not actually his real name but the way we know him and his work. Now we have these two pieces of fiction that are very different from each other.

Although some people think there are only two stories in the world — a stranger comes to town or a youth leaves town for his own epic journey — Makine has little use for either of those constructs. Born in Siberia in 1957 he was raised for a time in an orphanage and then by his French-speaking grandmother, fought for the Russian military in Angola and Afghanistan and was wounded and returned to Russia in a coma. Back “home” he had aspirations to be a teacher. But in a 2013 interview with The Telegraph, he explained, “But my tongue was too long, I started talking about the things I’d seen in Afghanistan, and I soon realized I’d have to choose between being behind the Urals [in a camp] or on the other side of the Iron Curtain. I had a chance to escape and I escaped.” What haunts him is the story of his native country in the 20th century, how lives have been ruined, how spirits have been crushed, and how freedom is still a rare commodity.

In Brief Loves he goes back to his own life. In eight small stories — really vignettes — the orphan narrator explores his memories much as his did in Dreams. The language is beautiful, the observations sometimes moving, and his concern for one Dmitri Ress, whose life seems to embody the tragedy of Russia and whose story acts as bookends, gives this book an arc. Its themes are also admirable: how poverty and war and oppression warp lives and hinder love. Sometimes the stories evolve as parts of conversation — as they sometimes do in Turgenev and Chekhov — and sometimes they are direct recollections. Still, although I found each story a pleasure to read, taken as a whole the book is almost too leisurely — nothing seems urgent.  Ny sense is that it might best be read a little at a time. Which is not to question its value, but only to suggest that, as beautiful as this little book is, there is a also weariness about it, a sense that this is material that Makine has worked over before. 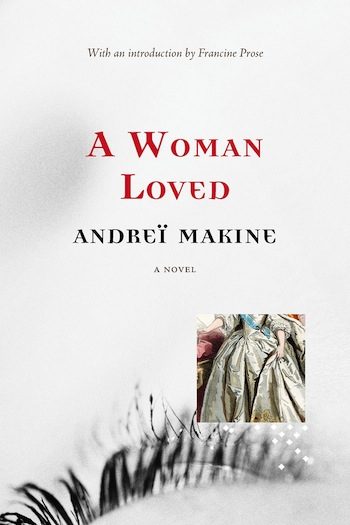 That is why I picked up the second novel, A Woman Loved, with great anticipation, because here Makine seemed to be striking out into new territory. And, although this is a book that badly needed a good editor, it is refreshingly ambitious, sly in its take on the famous Russian monarch, very lively, filled with absurdity and sex and betrayal and murder — all the things that life is filled with.

The centerpiece is Catherine the Great and her hold on young Oleg Erdmann, a Russian filmmaker, who at times seems to be so obsessed with Catherine that she is more real to him than the various women in his life. We learn about Oleg’s struggles with his craft, with his teachers and colleagues and lovers as Makine explores such themes as: what is art, how is it made, how does the artist’s identity and experiences affect what he is creating? Does incarceration and misery make for better art? These are questions that preoccupied Mandelstam and Akhmatova and Pasternak, and are certainly relevant today when so many of the hopes of perestroika and glasnost have been dashed.

As Oleg pursues first a film (that project ends abruptly and unsuccessfully) and finally a TV series about Catherine, we see his growing awareness of the subjectivity inherent in art, even in art that depends on historical figures. We also see him gaining insight not only into Catherine and the bizarre contradictions that seemed to propel her in life, but also into his own life, his German forebears, and how his “Germanness” propels some of his feelings about his subject (who was also German), his father’s struggles, and his own uncertainties about his identity and where he fits into a society that has become increasingly corrupt. Here we see him  realize how important Lanskoy was in Catherine’s life:

For historians Lanskoy is a mere interlude of sweetness in the continuing struggle of a woman destined to assert herself, to reign, and, in the absence of love, to purchase sex. A transient Prince Charming.
Yet he remains at the tsarina’s side for more than four years. The breakup is not caused by dismissal but by his death.
And it is he who prepares the way for the greatest change in the life of the one he loves–escape.
Oleg remembers Eva Sander . . . [who said] “What they were living through was so foreign to the way of the world that in order to love one another they had to erase that world. Escape. Be reborn . . .”

Anyone who has followed the events in Russia since the early 1990s can relate to that passage, and in the last third of this novel Oleg seems to be facing what has happened to his country and its ideals and begins trying, as Catherine did, to escape.

However, as good as the idea of making a novel out of someone sorting out Catherine’s life is, and as good as some of the passages are, especially about the film and TV industries in modern Russia, this is a novel that needed more revision and fewer words. There is a lot of repetition of information about Catherine, especially those she knew and had sex with. I would have been happier with a bit more about her accomplishments and less about her nymphomania. In the modern scenes as well the tendency to repeat is too often indulged. Oleg’s girlfriends merge into each other, the descriptions of communal living feel tired, and you sometimes feel as if Makine is plagiarizing himself, which is a perfectly legitimate thing for a writer to do, but so many scenes of spring snow and railroad stations and meeting and parting and lack of privacy tend to become clichés even in talented hands.

Makine needs to trust his readers more, and if he can do that, this writer may prove to be even more talented than we thought twenty years ago when he first came into our midst. Then he will earn his place in the long line of Russian writers whose contribution to the literature of the western world is so great and growing greater with time.

Roberta Silman Her three novels — Boundaries, The Dream Dredger, and Beginning the World Again — have been distributed by Open Road as ebooks, books on demand, and are now on audible.com. She has also written short story collection, Blood Relations, and a children’s book, Somebody Else’s Child. A recipient of Guggenheim and National Endowment for the Arts Fellowships, she has published reviews in The New York Times and The Boston Globe, and writes regularly for Arts Fuse. She can be reached at rsilman@verizon.net.