You are here: Home / Books / Book Review: The Resilient Wisdom of Tony Judt – For the Ages

Tony Judt is an American treasure, in time he may prove as great to our country as George Orwell and Albert Camus are to theirs. 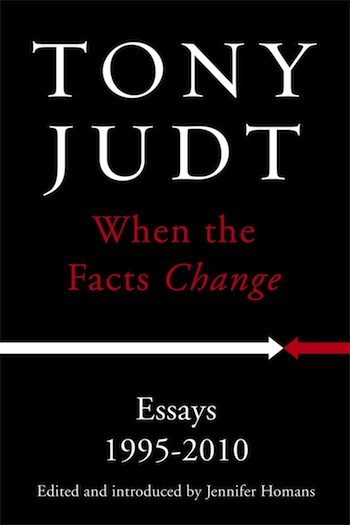 Time has a way of deciding things for us. After a very hectic spring and summer during which I read and re-read Tony Judt’s posthumous book, When the Facts Change, I finally sat down to write this review and realized that it is exactly five years to the day that Tony Judt died of ALS at the age of 62.

Judt was one of America’s important intellectuals, and his masterpiece, Postwar, published in 1995, is required reading for anyone interested in the 20th century. His grasp of western history is unparalleled, his breadth of knowledge amazing. The mid-’90s also seemed to mark a new start in life for him: He was appointed Director of NYU’s Erich Maria Remarque Institute and became its Erich Maria Remarque Professor in European Studies, he had settled down with Jennifer Homans, his third wife, and there were the births of his two sons, Daniel and Nicholas. But, sadly, soon after the September 11th attack, which was a defining moment for Judt as well as for the rest of us, he was diagnosed with cancer, which required heavy radiation and chemotherapy, and which, apparently, had no relation to the devastating diagnosis of ALS that he received in 2008. That he was able to publish so much while dealing with these enormous health problems gives you a clue to his intellectual strength and what Homans calls his “inner certainty.”

Homans’ introduction to this book is of special value. It brings him closer to his readers because it is written with uncommon tenderness and love. It also gives us insights into his working methods, his love of travel, especially on trains, his easy relationship with his immediate family and his need to put them before anything that resembled a social obligation, his sense of humor, his heroes — Isaiah Berlin, Bernard Williams, Alexander Pope, Philip Larkin, Jean Renoir, Vittorio De Sica — and his reverence for Albert Camus (included in these essays is a beautiful one on The Plague) and George Orwell.

The essay collection is organized into five parts, starting with 1989 and ending with three biographical pieces about Francois Furet, Amos Elon, and Leszek Kolakowski. Some began as book reviews — usually for his most prominent platform, The New York Review of Books — and some are straight essays, such as the two on trains (“The Glory of the Rails” and “Bring Back the Rails!”), which are filled with verve and delicious facts and form the core of a book he planned to call ‘Locomotion’ but did not live long enough to complete. Although some of what he has to say he has said before, most of these pieces have that certainty that can come only when one is facing death and this is the last chance to get it right. A lot of the news isn’t good, yet these essays are necessary to his oeuvre and underline what was so important to him as an acute observer of not only Europe and the rest of the world, but America, which had become, perhaps more by circumstance than choice, his home. As Homans writes:

… in the years that followed [the World Trade Center attack] he slowly became more and more, though never quite, American — ironically at the very moment when he found greatest reasons to be critical of its politics. He acquired citizenship … [and] Around 2003 I noticed a shift in his thinking, and in his writing from “them” to “us”: “The Way We Live Now.”

The latter 2003 essay decimates a book called The War Over Iraq, Saddam’s Tyranny and America’s Mission written by conservatives Lawrence Kaplan and William Kristol and raises crucial red flags about America’s relationship to the international community, especially its allies.

A man as truthful and wise as Judt inevitably runs the risk of becoming a controversial figure, and among American Jews he was often vilified after he published two essays, 2003’s “Israel: The Alternative” in The New York Review of Books and 2006’s “The Israel Lobby and U.S. Foreign Policy” in The New York Times. His clear-eyed assessment of Israel’s intransigence, its refusal to “grow up and join the western democracies” — as well as his views on the nefarious influence of the Israel Lobby — has angered many Jews. One of my friends once referred to him as “the man we can’t like.” But his worry was real and important — he is one of the few American Jewish critics who seems able to treat Israel, a country which he has loved since he worked on a kibbutz as a teenager, with a truly even hand.

The heart of this last book is the section he calls “Israel, The Holocaust, and the Jews.” In these eight chapters are essays and op-ed pieces that further underline his great concern. While it is true that he hasn’t lived to see these last five years, and, most important, the terrible summer of 2014, his analysis of the problems of the Middle East are still relevant. The very people who were so vocal and critical about him when he was alive should read these essays. For not only is he brave enough to “change his mind when the facts change” (supposedly advice from John Maynard Keynes), but what comes through more than ever before is his essential Jewishness, confirmed by Homans: “For Tony, being Jewish was a given — the oldest piece of furniture in the place. It was the only identity he possessed unequivocally.”

He addresses the increasing conflation of anti-Zionism with anti-Semitism and how misguided it is, he is blunt about who is to bear the blame in the Middle East — both the Palestinians and the Israelis — and gives further reasons why he doesn’t believe a two-state solution is possible. In a review of this book in Tablet Magazine last spring he was again attacked by a reviewer who argued that “his essays read as symptoms of his age, rather than explanations of it,” which is exactly the sort of reviewer’s jargon he despised and reveals a preconceived aversion to what he has to say. But American Jews are making a mistake if they don’t listen to Judt and, at the end of a very interesting section which covers all the pros and cons of any discussion of the Middle East I have ever heard, he warns:

Time is not on anyone’s side in this business. And we should be well advised to recall that there is no law of nature which says that sooner or later a solution will somehow just “emerge.” The consequences of letting things fester, as we have done for too long, or leaving them in the hands of incompetent minorities running both Israel and the Palestinian Authority, would be catastrophic. Thanks to the “Jewish State’s” abusive treatment of the Palestinians, the Israel/Palestine imbroglio is the chief proximate cause of the resurgence of anti-Semitism worldwide. It is the single most effective recruiting agent for radical Islamist movements. It makes nonsense of U.S. and European foreign policy in one of the world’s most sensitive and unstable regions. Something different has to be done.

The beginning of something different has finally come down the pike, and he is not here to see it, but I have a feeling that Judt would be a fan of the Iran Nuclear Agreement. I urge anyone who is on the fence to read these eight chapters in When the Facts Change. They may be persuaded that, at last, we have something that is no longer stuck in the past but looks forward to the future.

Concomitant with Judt’s unease about the Middle East is his examination of the problem of evil in the world. In his superb essay on The Plague he argues that “looking back on the grim record of the twentieth century we can see more clearly now that Albert Camus had identified the central moral dilemmas of the age. Like Hannah Arendt, he saw that ‘the problem of evil will be the fundamental question of postwar intellectual life in Europe …’ [from Arendt’s essay, “Nightmare and Flight”]. In these last years in the United States we are finally facing the problem of evil and its many symptoms — deep-seated prejudice, economic inequality, the need for better universal healthcare, better education, etc. — and we have made strides in many directions. But Judt reminds us that we must be ever vigilant, quoting the closing sentence of Camus’s greatest book:

The plague bacillus never dies or vanishes entirely . . .it can remain dormant for dozens of years in furniture or clothing … it waits patiently in bedrooms, cellars, trunks, handkerchiefs, and old papers, and .. perhaps the day will come when for the instruction or misfortune of mankind, the plague will rouse its rats and send them to die in some well-contented city.

Not everyone has the courage to keep reminding us, as Judt does, of our precarious fate. But that is exactly the point. He is an American treasure, in time he may prove as great to our country as Orwell and Camus are to theirs. Displaying remarkable stamina and will, he left us a body of work that should be read now and kept for the ages. Not only his scholarly work in the field of French history, but especially the books since Postwar: Reappraisals, Reflections on the Forgotten Twentieth Century, Ill Fares the Land, The Memory Chalet, and now When the Facts Change.

For I am convinced that these books will live on long after him, and what he has to say should be taken seriously not only by his fellow academic colleagues, and those who consider themselves intellectuals, but by anyone who is concerned for the fate of our country and our world. A world that is growing ever smaller, a world whose events impinge more directly on us than it ever has before, but also a world that made it possible for a poor Jewish boy born in the East End of London in 1948 to become a scholar as learned and as prescient as Tony Judt.

That is the miracle, why we must cherish Judt’s books, read them and discuss them with our children and grandchildren. And then go back to his brilliant sources — Amos Elon, Kolakowski, Sperber, Levi, Camus, Orwell, Koestler, Arendt and so many others — and read them, too. And for those who may aspire to be scholars and writers, keep in mind his clarion call for truth quoted at the end of the introduction from an essay he was working on when he died:

You cannot write with a view to impact or response. That way you distort the latter and corrode the integrity of the writing itself. In that sense, it is like shooting at the moon — you have to allow that it won’t be in the same place by the time the rocket gets there. Better to know why you are sending it up in the first place and worry less about its safe landing …

You cannot anticipate either the context of the motives of readers in unconstrained futures. So all you can do is write what you should, whatever that means. A very different sort of obligation.

Roberta Silman Her three novels — Boundaries, The Dream Dredger, and Beginning the World Again — have been distributed by Open Road as ebooks, books on demand, and are now on audible.com. She has also written short story collection, Blood Relations, and a children’s book, Somebody Else’s Child. A recipient of Guggenheim and National Endowment for the Arts Fellowships, she has published reviews in The New York Times and The Boston Globe, and writes regularly for Arts Fuse. She can be reached at rsilman@verizon.net.