This is a special First Night Presentation of the 1923 Harold Lloyd classic with the Berklee Silent Film Orchestra performing an original score under the direction of Sheldon Mirowitz (sponsored by the Coolidge Corner “Sounds of Silents” Series). Lloyd played the American everyman, scrambling for his big break. This is the perfect introduction to the work of a great comedian, featuring amazing stunts as well as the iconic image of Lloyd hanging from a clock high above the city.

“A feature-length onslaught of the wildest, weirdest and most action-packed face-rippers to have ever (dis)graced drive-in screens — all culled from Grindhouse Releasing’s vast archive of golden-age exploitation. Blaxploitation, sexploitation, horror, mondo, martial arts and more mix with mutant subgenres, freakish fiascos and other brain-bludgeoning, eye-blasting two-minute masterpieces not seen since the flea-ridden heydays of 42nd St.” (“Synopsis from the Cinefamily and Heavy Midnites because they hosted the premiere and really nailed it.”)

Holidazed? Workshops, lectures, mini-performances, and a Parka Parade in the heart of Central Square, some events cosponsored by the Massachusetts Dance Education Organization, include master teacher Bill Evans, David Parker and The Bang Group, Paula Josa Jones, Boston Ballet’s Boyko Dossev and the promise of surprise guests. As a special gift, everything is free.

Yes, it’s New Year’s Eve — or as those in the entertainment service industries call it, “Amateur night.” But that doesn’t mean there isn’t good entertainment to be had for those venturing forth. Guitarist/vocalist Dwight Ritcher and singer Nicole Nelson deliver a personal, engaging mélange of blues, R&B, jazz, and even a touch of ska. They’re joined by singer/guitarist Jesse Dee.

Necessary Monsters by John Kuntz. Directed by David R. Gammons. Staged by Speakeasy Stage Company in the Roberts Studio Theatre at the Stanford Calderwood Pavilion at the Boston Center for the Arts, 527 Tremont Street, Boston, MA, through January 3.

“Sex, mystery, and terrible danger lurk just around the corner” in this world premiere production of a script by award-winning local playwright John Kuntz. There is not much about the plot in the press release, just that the audience will be taken “into the labyrinth of the human psyche for a darkly hilarious and dream-like look at the ways we do violence and the stories we create to keep us up at night.” The “all-star Boston ensemble includes Thomas Derrah, McCaela Donovan, Stacy Fischer, Evelyn Howe, Georgia Lyman, Greg Maraio, and Michael Underhill.” Arts Fuse review

The Light Princess by Lila Rose Kaplan. Directed by Allegra Libonati. Music by Mike Pettry. Choreography by Jeff and Rick Kuperman. Presented by the A.R.T. /MXAT Institute for Advanced Theater Training at the Loeb Drama Center, Cambridge, MA, through January 4.

A holiday show that would seem to push all the right inspirational buttons: “Based on George MacDonald’s fairy tale, this delightful musical tells the story of a young princess cursed to live without gravity. She floats through life unburdened by cares or sorrow, constantly soaring through high winds and avoiding low trees. If her parents, the King and Queen, don’t help her come back to earth by her 16th birthday, the curse will be permanent.”

O.P.C. by Eve Ensler. Directed by Pesha Rudnick. Staged by the American Repertory Theater at the Loeb Drama Center, Cambridge, MA, through January 4.

The world premiere of a political satire from the author of The Vagina Monologues. The script is billed as “a wildly funny exploration of consumption and politics that asks, “How are we to survive as a species if we insist on destroying the world we love?”‘ The cast includes Kate Mulligan and Olivia Thirlby. Arts Fuse review

I like the way this company thinks in the midst of winter — why not a show about the warm times ahead? Midsummer is the story of a great lost weekend of bridge-burning, car chases, wedding bust-ups, bondage miscalculations, midnight trysts and self-loathing hangovers.” The piece comes with lots of praise from Europe — even the assurance from the Daily Telegraph that Greig is “one of the most interesting and adventurous British dramatists of his generation.”

The best-selling novelist will come to Cambridge to read and discuss her latest tome. Framed as a reminiscence from a grandmother to her curious granddaughter, Diamant’s novel tells the story of Addie Baum, a Jewish girl growing up in The North End from immigrant parents at the beginning of the 20th Century.

The stories in Bergman’s new collection spotlight the lives of stranger-than-fiction women: her subjects include the cross-dressing Marion “Joe” Carstairs, the heiress to a Standard Oil fortune who bought her own private island, and the International Sweethearts of Rhythm, the nation’s first integrated all-girl swing band.

An adventurous mathematician, Aczel has traveled the globe, criss-crossing continents and investigating ancient documents. In this volume, he is on a quest to discover where our numerals came from. He leads the reader on an engrossing journey that ends up in the heart of the Cambodian jungle.

Newtonville Books brings two local authors together to read from their Boston-themed work. DiNatale’s book is the memoir of a former Boston police detective who goes far enough back to have been part of the team that caught The Boston Strangler. DiNatale takes the reader on a journey through the underside of the city and into the minds of those who populate it.

Phillion is a Salem-based actor, writer, and film director whose film Certainly Never was nominated for a series of awards at the 2013 Massachusetts Film Festival, including best screenplay and best film. He will be reading from his futuristic fantasy novel featuring characters named Doc Silence, Entropy, Fury, and Starlight. 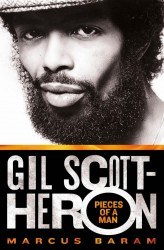 The great Gil Scott-Heron was many things: poet, songwriter, activist, social critic and tragic drug addict. Author and editor Baram was a life-long fan who knew the musician well and often discussed writing up Heron’s life with the man himself. Baram will talk about the legendary artist and explain how the revolution has not, and will not, be televised.

In an event co-sponsored by Grub Street, the Harvard Book Store welcomes MB Caschetta as part of their New Voices in Fiction series. Caschetta’s debut novel is set in Upstate New York during the end of the Nixon administration. As the political world dissolves into chaos, children are suddenly disappearing and young Cee-Cee Bianco is having visions of the Virgin Mary. Kirkus reviews has called Caschetta’s novel “filled with a kind of dark poetry and the menace of ordinary evils.”