You are here: Home / Featured / Jazz CD Review: A Song Cycle “For Langston”

For Langston fails on its own terms, which is to produce a moving, insightful, and in some sense accurate interpretation of the poetry of Langston Hughes. 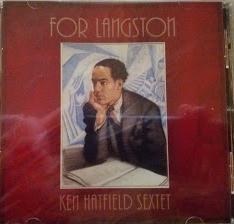 Guitarist Ken Hatfield has composed an album-length song cycle based on the poetry of Langston Hughes. On the front cover of the cd booklet is Winold Reiss’s famous portrait of the handsome, nattily dressed Hughes c 1925, fruitful midpoint of the Harlem Renaissance. On the back cover are photographs of the six white musicians who play on the album. Somewhere between the images front and back lies the problem, because the composition and execution of it (pun intended) seem to be a product intended to honor Hughes and his titanic contribution to American poetry while missing the mark in the worst possible way. For Langston appears to be yet another misguided and myopic attempt by the white liberal sensibility to honor an essential aspect of the African-American struggle—the creation of black art that was for Hughes and many who came after him so vital to the creation of black identity—while demonstrating no understanding of black music, black art, or black identity.

Consider the video in which Kenny G “jams” with Louis Armstrong and you’ll have some idea of my overall impression of For Langston. Hatfield’s compositions are not as offensive as Mr. G’s presumptions, but they do share an essential lack of awareness—both self-awareness and awareness of the giants they are paying homage to. Think about this recording as the start of a series in which middling white artists honor dead and far greater black artists, and consider some other possibilities. “Perry Como Swings Ornette Coleman Style,” for example, would be a fine second offering, and if the objection were made that Perry Como is dead, I would say that some mode of deathliness, or perhaps it’s deadliness, should be a requirement for the series.

I was puzzled not only by the musical compositions themselves but also at the selection of poems upon which the musical compositions are based. Hatfield explains, “Langston’s work covers a lot of territory, ranging from the cosmopolitan and universal to the provincial and downhome, frequently touching upon most everything in between. I doubt that any one composer could address his entire oeuvre, and it was never my intention to try. I selected the poems that spoke to me, the ones that I identified with. [….] The title of each song corresponds to that of the poem which serves as its lyrics, with three exceptions. The first, ‘Dream Boogie,’ is comprised of three poems: ‘Dream Boogie: Variation,’ ‘Easy Boogie,’ and ‘Boogie 1 a.m.’”

These poems are fairly well known; “Boogie 1 a.m.” contains the famous phrase “dream deferred” that also appears in “Dream Boogie” and “Harlem.” But Hatfield, for some reason, has not used either of these more famous poems, and the selection of poems overall seems a bit eccentric, if that is the right word. The composer focuses mostly on poems not seen in the typical anthologies or in the recordings of Hughes reciting his own work. That can be a good thing, as any anthology that avoids the chestnuts is probably a good thing, but one wonders a little about Hatfield’s taste as it seems a little out of sync with Hughes scholarship as well as Hughes’ own selection of the poems he most wanted to read to his audience. I own two cd’s of Hughes reciting his own poetry—including one from The Voice of the Poet series edited by J. D. McLatchy—and I’m currently teaching Hughes out of Selected Poems of Langston Hughes, Vintage Classics Edition, 1990. Most of the poems Hatfield has selected do not appear in any of the three anthologies.

Most notably, Hatfield has avoided the anger in Hughes’ work, with the exception of Hughes’ bitter and bitterly repeated phrase, “a dream deferred.” There is no bitterness to be found here, though, and no anger—only, once in a while, a tone of wistfulness that seems intended as a stand-in for pain and sorrow: a cloudy day, what a bummer, but then the sun comes out again. Hatfield explains that “While I have studied virtually all aspect and most styles of music, I am primarily a jazz musician, and I wanted to create a work that would stay true to the form and functional integrity of a song cycle, while embodying the spirit of exuberant exploration at the heart of the improvisational nature of jazz.” Does Ken Hatfield know that, for Langston Hughes, underneath the “exuberant exploration” is something else, something essential that he has not accounted for in his music? Here is “Dream Boogie,” a poem he has sidestepped while using the title for his own composition:

Good morning, daddy!
Ain’t you heard
The boogie-woogie rumble
Of a dream deferred?

Listen closely:
You’ll hear their feet
Beating out and beating out a—

You think
It’s a happy beat?

Listen to it closely:
Ain’t you heard
something underneath
like a—

What did you say?

Sure,
I’m happy!
Take it away!

Hatfield has avoided the middle of this poem, and he has avoided the “something underneath.” He has not listened closely. Think again of Perry Como performing Ornette Coleman or, if that seems ridiculously unfair, or just plain ridiculous, listen to Hatfield’s musical interpretation of “Song of the Revolution” and then imagine Miles Davis’s “Blue in Green” done over with a string section as music suitable for the dentist’s office. You have heard that, or something like it. Listen closely and you’ll hear what’s not underneath. Think of Billie Holiday backed by the white-as-Wonder Bread chorus on “God Bless the Child.”

All this is not to say that Ken Hatfield’s musical compositions lack skill, which is perhaps where the comparison with Kenny G becomes a little skewed. Mr. Hatfield is an accomplished guitarist who has surrounded himself with accomplished musicians. From a technical, Juliard sort of standpoint the music is interesting, even occasionally daring. But it’s not a new thing to say that technical virtuosity, including mastery of difficult time signatures, does not always produce jazz. Arguing exactly what jazz is or should be is a subject for another day, perhaps, but I’m suggesting that For Langston fails on its own terms, which is to produce a moving, insightful, and in some sense accurate interpretation of the poetry of Langston Hughes. Hatfield’s jazz is of the bossa nova inflected Rampal/Bolling variety—pleasant enough on a sunny day in Nice, even better when accompanied by a glass or two of chilled Puligny. It’s just that this music might be for Langston, but it has very little to do with Langston.