But sometimes, though it may defy certain sorts of expectations, Jews excel not because they have higher sports IQs but just because they are better. 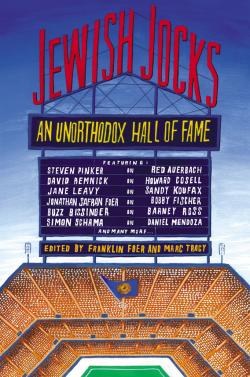 In his book about their relationship—Red and Me: My Coach, My Lifelong Friend—Bill Russell recounts a conversation he had with Red Auerbach that might have served as the opener for this enjoyable and informative collection of essays about Jews in a range of sports or sport-related activities, including baseball, ping-pong, basketball, boxing, competitive eating, martial arts, football, point fixing, and chess.

In Russell’s first year on the Celtics, Auerbach mentioned that he had grown up “in Williamsburg, a rough ethnic section of Brooklyn around the bridge that bears its name.” Red added, “It was tougher than hell growing up in Williamsburg. There was a lot of prejudice against Jews. I’m a Jew.”

Russell remembers Auerbach as “not bragging and not complaining—just explaining.” Still, not having had much contact with Jews to that point, Russell requested clarification: “Well, I don’t know what that means. What is a Jew? Is it a religion? Is it a culture? A tribe?” Auerbach gave him a backboard shattering dunk of an answer. “Russell,” he said, “a Jew is a Jew!”

Though Jewish Jocks lacks a comparably pithy summation of what binds its subjects together, it does, as it happens, include a sharp piece about Red Auerbach by Stephen Pinker. Pinker/Auerbach might seem an odd pairing, Pinker having grown up in Canada, where hockey is hotter than hoop. But the author of How the Mind Works is a Celtic fan and has no problem converting basketball into a vehicle for his thoughts about Jewish history.

“I am not the descendant of a long line of rabbis (as an improbably large proportion of Jews claim to be,” he writes. No, he claims descent from “makers or sellers of gloves, neckties, auto parts, and women’s garments” and is convinced his commercial as opposed to clerical background gives him the inside track when it comes to understanding Jews. It is their mastery of “the art of the deal” that has made Jews “historically distinctive.” In his view, “Jews are not so much the people of the book as the classic middleman minority—retailers and money lenders who are not tied to the land or a guild.”

Pinker praises the fast break, team play style Auerbach instilled in the Celtics but derives at least as much pleasure from Red’s “off the court” activity—his consummate skill in wheeling and dealing, his unbeatable nose for the basketball bargain. “It was Auerbach’s trades that became the stuff of legend. Over and over he exchanged has-beens, head cases, and who-the-hells for future Hall of Famers and good team players who would lead the Celtics to strings of NBA championships.”

What about Auerbach’s approach to race? Yes, he brought Bill Russell, the dominant player of his day, on board and built championships around him. This stands out if only because the Boston sports scene was not exactly a hotbed of racial tolerance; Red Sox owner Tom Yawkey, for example, ran his ball club as if it were the northeast chapter of Jim Crow. But Auerbach later fielded championship teams that were, by NBA standards, conspicuously white. Pinker finds nothing puzzling in that. From Bill Russell to Larry Bird and company Auerbach’s decisions were ruled by “the commercial spirit.” Colorblindness is handy when you are building a team. “Racism,” writes Pinker, “because it favors color over talent, is bad for business.”

Pinker’s wife, the novelist Rebecca Newberger Goldstein, finds other things to like about basketball than the art of the deal and deems them no less fundamentally Jewish. Her subject is Barney Sedran (born Bernard Sedransky), a basketball star in the early years of the twentieth century, and, at 5’4″, the shortest guy ever inducted into the b-ball hall of fame. Basketball had something of a Yiddish accent back then, and Barney once starred on a team of shorties known as the “Busy Izzies.” Short herself, Goldstein likes what Sedran’s teams could do in lieu of size, how they “exploited speed, cunning and subtlety rather than relying on such unrefined advantages as brute strength and redundant height.” For Goldstein, “Sedran represented a kind of basketball that was quintessentially Jewish: manically energetic, compulsively alert, upending expectations, and compensating for short—really short—comings.”

In Jewish Jocks, basketball is often memorialized as the City Game. Todd Gitlin, in his piece about Red Holzman, writes that “It’s typical of New York City, which is large and contains multitudes, that it would harbor both the playground style, marked by self-aggrandizement, and the City Game, marked by self-sacrifice. . . New York is at once a city of show-offs and a city of unions.” And smarts, cunning, and subtlety are often underlined as the very qualities Jewish athletes cultivated in their games. Barney Ross, who in the late twenties and early thirties earned world championships belts in three weight definitions (lightweight, light welterweight, and welterweight) is described by Buzz Bissinger as having earned “the reputation of being the ultimate scientific Jewish boxer.”

But sometimes, though it may defy certain sorts of expectations, Jews excel not because they have higher sports IQs but just because they are better. Take Sandy Koufax, who is covered in this book by Jane Leavy, his biographer. She writes, “He quit at the height of his popularity and success. Each of his 27 wins in 1966, his final season, was a complete game, five of them shutouts. He struck out 317 in 323 innings.” These are incredible statistics, but Koufax does not bring Leavy unalloyed joy. After all, he humiliated her childhood “hero Mickey Mantle in the 1963 World Series.” He did that not because he was smarter or more scientific or because he was more subtle and cunning. He did it just because between his fastball and his curve, he was nearly unhittable.

There is some fine writing in this book. And there are some duds. Economist and ex-President of Harvard Lawrence Summers, when he writes about tennis champ Harold Solomon, manages to make tennis sound about as inviting as his own dismal science. When Mark Singer writes about handball wizard Jimmy Jacobs, he does so from afar, as if he had never seen or been involved in a handball game. The piece about Bobby Fischer by Jonathan Safran Foer (an editor of the book) doesn’t have anything new to say: Yes, Fischer was an incomparable chess player (not that Foer troubles himself to provide examples), and yes, he was an hysterical anti-Semite, as quote upon quote from Fischer amply demonstrates. But does Foer have to say that when Fischer beat opponents “he circumcised them”? This is where sport writing sinks into schlock. There would have been less temptation to write this way about Bobby Fischer if the editors thought to include other Jewish chess greats, of whom there are no lack.

The book provides many avenues into Jewish history, including the tragic side. Deborah Lipstadt’s piece on the massacre of Israeli athletes at the 1972 Munich Olympics is powerful, and the story ongoing. “Along with the relatives of the murdered, Israeli officials continue to petition the IOC [International Olympic Committee]to memorialize the victims. The IOC ritualistically refuses these requests.”

And there is humor. Benny Leonard, the great lightweight champ, proudly identified as a Jew and would tolerate no insult. As told by Franklin Foer,

On a train ride to Chicago, he [Leonard] watched a large, ill-mannered man enter his compartment and menacingly ask, “Is there a Jew in this car?” As the story goes Leonard would have crushed the man, except for the steadying hand of his manager, who assured Benny that the man must be drunk. When the man returned, he repeated his exhortation, only with greater fervor: “Is there a Jew in the car?” Leonard could no longer contain himself and rushed toward him. “Yeah, I’m a Jew, he said. “You wanna make something of it?” To which the man replied, “Thank God, now we have a minyan.”

Jewish Jocks, a good read, would have been an even better book if instead of the drawings at the front of each chapter there were photographs. This volume many not cover all the bases of being Jewish, but then again, what does?