You are here: Home / Books / Book Review: A Flimsily Built “House of the Interpreter”

Instead of exploring his inner life at the time or his adult understanding of the institution that shelters him, Ngũgi wa Thiong’o draws a dispassionate and largely predictable report of boarding school life. 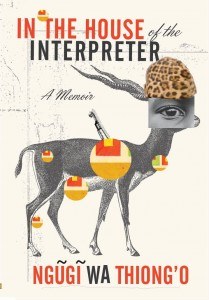 Ngũgi wa Thiong’o or Ngũgi—as he is fondly known all over the world—is a protean writer: playwright, journalist, novelist, essayist, literary theorist and teacher, now chairman of the International Center for Writing and Translation at the University of California, Irvine. Born in 1938 near Limuru, then Kenya Colony, and baptized James Ngũgi, he has published seven novels including the first novel in English by an East African. In 2010, his memoir of childhood, Dreams in a Time of War, was published by Pantheon. I reviewed it admiringly here.

Dreams in a Time of War begins with Ngũgi’s birth in 1938 and ends with his admission to Alliance High School, the first secondary school in the country for African boys. Alliance promises not only an education but a respite from the nightmare of daily life for Africans under increasingly brutal colonial rule. Ngũgi is a child during the Second World War and a teenager during the struggle of the Mau Mau against the British, a conflict in which his brother fights. Dreams in a Time of War also features conflicts between fathers and sons, mothers and daughters, and complicated relationships between friends. It’s vivid, haunting writing, and I was looking forward to reading more of it.

The first pages of In the House of the Interpreter do not disappoint. It is April of 1955. Traveling home to Limuru after his first three months at Alliance, Ngũgi walks up the ridge to the place his village had stood and finds it destroyed. “My mother’s hut, my brother’s house on stilts, and his furniture store have been razed to the ground,” he writes. “My home, from where I set out from Alliance only three months ago, is no more . . . I suddenly realize that the whole village of homesteads has disappeared . . . How could a whole village, its people, history, everything, vanish, just like that?”

A familiar figure appears in the desolate landscape, a man who has worked for his family. In the outwardly “matter-of fact way” of the severely disorientated, he says that everyone has been evicted and herded into what Ngugi calls a “concentration village.” The teenager is struck by what we recognize as a traumatized shock. “Force feet to move,” he tells himself. “Yes, move. Move. Move. Move on.” From a distance, he sees rows of huts in different stages of completion, patrolled by armed guards. The people he queries, displaced from several different places, don’t recognize his mother’s name:

Somehow, eventually, I find my family. My mother and my brother’s wife are on the rooftop, thatching . . . My mother calls out, Tuge ni woka, so you have come back, as if she would rather I had stayed away . . . I find a corner, take off my Alliance uniform, and change into old clothes, and within a few seconds, I’m all mud. This is not how I had imagined my return.

“And Alliance, where I have now lived eighty-nine days longer than I have lived here? What is it to me, now that this village confronts me as a stranger? 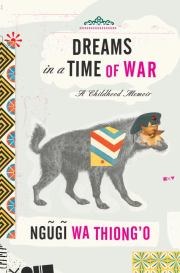 It’s difficult for a reviewer to critique a memoir of a life filled with such injustice and valiant struggle. But I’d be prevaricating if I wrote that Ngũgi’s attempt to transition to the subject of his memoir succeeds. After this horrific scene of destruction, the reader wants to know much more about how Ngũgi and his family interact or don’t interact in the face of this psychic trauma and for how long. What was Ngũgi thinking and feeling when he changed back into his uniform and took the train back to school? Did he feel any guilt in returning to his safe house? What did his mother—such a strong, compelling figure—tell him?

A good memoir would not drop that painful a story easily. But that’s what the author does and continues to do for most of the next 180 pages of In the House of the Interpreter. Instead of exploring his inner life at the time or his adult understanding of the institution that shelters him, the memoirist draws a dispassionate and largely predictable report of boarding school life. This, of course, is well-tread literary ground in almost every national literature. We’re familiar with the headmaster and eccentric teachers; the rituals of hazing, dorms, showers, and chapel. Alliance is dedicated to constant (and conventional) religious proselytizing, but we see little of Ngũgi’s reaction to it or of the charm and the sense of humor so evident in his earlier book.

Alliance High School, he writes dryly, was founded by “a short-lived alliance of Protestant missions of the Church of Scotland, the Church Missionary Society, the Methodist Church and the African Inland Mission.” But instead of building on this ironic tone or creating the kind of vital, multi-layered cast of figures that he does so deftly in Dreams in a Time of War, Ngũgi limits the range of his evocative style. He dutifully lists names instead of developing characters, rarely sustains a scene or stays with a person. I found myself putting the book, annoyed by Ngũgi’s baffling narrative choices. In the House of the Interpreter covers just five years — from 1955 through 1959 -— but it seems longer and reads, at times, as if the narrator felt less like evoking the experience than determined to make sure every friend was mentioned. There’s also a lot of plain sloppy writing.

For example, Ngũgĩ writes, “I always looked forward to seeing which Shakespeare would show up at the end of the year. But the King Lear production in 1958 held more than the usual fascination: it was going to mark the end of one era and the beginning of another. I did not take part in the production, but I could not help but admire my classmate Andrew Kaingu’s courage in auditioning for and accepting so big a role: Lear dominates the play in the number of scenes in which he appears and the lines he speaks. . . . Kaingu’s hair had been powdered gray to give his nineteen years a touch of age but he did not need gray hairs to display his skills and talent. . . .” Ngũgi’s point, it turns out, is that Lear’s lines “Plate sin with gold, and the strong lance of justice hurtless breaks; arm it in rags, a pygmy’s straw does pierce it” as spoken by Kaingu “accurately reflected the bloody struggle between the Mau Mau guerrillas and the forces of the colonial state.” But the author’s account of the imaginative reach and ambiguities of great art reads like a draft.

Teachers and students quote a lot of Shakespeare in this short memoir, as well as hymns, Scripture, and speeches from British politicians. The title likens Alliance High School to the Interpreter’s House in John Bunyan’s seventeenth-century allegory The Pilgrim’s Progress; its Headmaster Carey Francis is the Interpreter who believes that “the dust we had brought from the outside could be swept away by the law of good behavior and watered by the gospel of Christian service.” Francis is a towering presence at the school, but he remains a stick figure for the reader, as do Ngũgi’s other classmates and teachers at Alliance. Although Ngugi raises religious, cultural, and racial themes, he does little with them. I wondered what was getting in the way of his bringing this vital phase of his autobiography to life and concluded that, having lived it once, he didn’t want to revisit and analyze the ambivalences of his boarding school experience.

In the House of the Interpreter picks up immediacy again when Ngũgi leaves the cloistered haven of Alliance and re-enters world outside its walls. He’s arrested in one of the random raids that the British are empowered to conduct under the emergency laws. Despite his graduation certificate from Alliance, the money in his pocket, and his newly-bought clothes, the young man is thrown into a filthy prison. Ngũgi’s writing is as powerfully evocative as it was in the introduction to this memoir. I wish that was true for the pages in-between.

Helen Epstein has written both memoir and biography and publishes classics of the genres at Plunkett Lake Press.