There are plenty of classic recordings of the “Siegfried-Idyll” and “Metamorphosen” already, but here’s one more—and it also includes a rollicking Schumann with which you can’t go wrong.

While there might be no shortage of recordings of the latter works, Schumann’s 1849 Concert Piece is much harder to come by. For years, my bell-weather recording has been a live Chicago Symphony Orchestra (CSO) performance conducted by Sir Georg Solti. Taped in Orchestra Hall in May 1989, it features an almost unbeatable combination of horn players: Gail Williams, Richard Oldberg, Norman Schweikert, and Daniel Gingrich (and is available as Volume 14 of the CSO’s “From the Archives” collection).

And they remain “almost unbeatable,” though Herrn Dengler, Draxinger, Schmitz, and Hochwimmer give them a run for their money with a studio performance that, at times, matches the glorious sound of the earlier Solti recording. In the contrapuntal finale, especially, there are moments of pure magic and burnished, golden tone that one only hears from the best German horn players and orchestras (or their premier imitators). But the “canned” aspect of the studio can’t match the electric spark one often gets in a live concert and that is present on the Solti album. Still, this is a very good recording. The opening movement crackles, and Mr. Nagano’s tempos keep the music moving at a brisk clip, especially in the outer movements. The central Romanze forms a nice contrast, sensuous and poetically charged. Throughout, the four soloists are nearly impeccable in their ferociously demanding parts, and the BSO plays this music as though they own it.

One might argue that the orchestra definitively owns the other two scores on the disc, since the BSO had a long, personal history with both Richard Wagner and Richard Strauss. Several Wagner operas (including Tristan und Isolde, Das Rheingold, Die Walküre, and Parsifal) received their first performances at the Bavarian Court Opera (now the Bavarian State Opera, for which the BSO is the orchestra), and Strauss’s father was the ensemble’s principal horn from 1847 until 1889.

The Siegfried-Idyll, Wagner’s 1870 birthday present for his wife, Cosima, provides a surprisingly personal glimpse inside the home of the Wagner family, one that certainly adds to our complex understanding of its composer. It’s one of the least conflicted pieces Wagner ever wrote, even though various motives heard within turned up in the opera Siegfried six years later (the Siegfried of the Idyll refers to Wagner’s son of that name). In this recording, Mr. Nagano and the BSO give a rapturous, impassioned performance that emphasizes the score’s lyrical qualities. The wind playing is particularly noteworthy: sweet, clear, and warm—precisely as it should be. 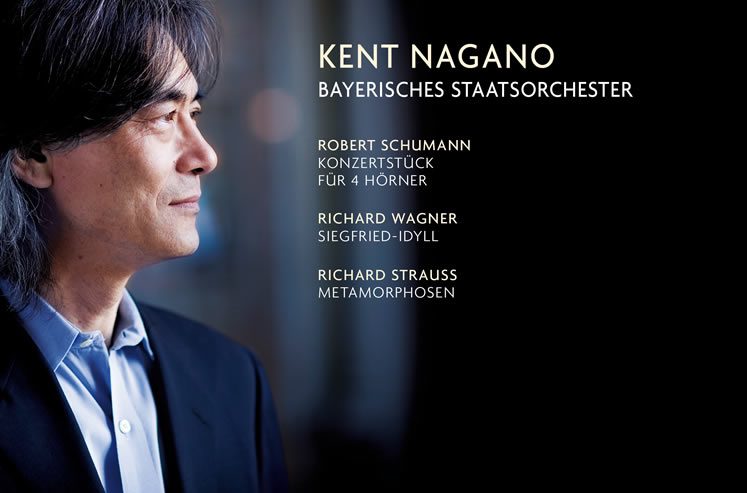 After 9/11, Strauss’s Metamorphosen was occasionally discussed as one of the few successful musical responses to a large-scale tragedy. Never mind that Strauss was more bothered by the destruction of the Bavarian State Opera house by Allied bombers when he wrote the piece in 1945 than was (or let on to be) about the slaughter of tens of millions of his fellow human beings over six years of devastating conflict, but one of the glories of music is the fact that its meaning can be so ambiguous.

At least that’s what I was thinking as I listened to this sumptuous performance by the strings of the BSO. Again, these players and Mr. Nagano find the lyrical element in whatever they’re playing, latch onto it, and hold on until the end. Here, as in the Siegfried-Idyll, the result is enchanting, though with a grim twist at the end. Particularly impressive are 1) the remarkable textural lucidity of the BSO’s playing—even in the most nebulous contrapuntal sections, there’s a clarity and focus to each line—and 2) the emphasis Mr. Nagano places on Strauss’s motives, which both recall the German cultural tradition being lamented in the score and some of Strauss’s earlier music (particularly the tone poem Tod und Verklärung).

The sound quality of the SACD recording is second-to-none: immediate, full, and wholly present, in the quietest and busiest passages alike. There are plenty of classic recordings of the Siegfried-Idyll and Metamorphosen already, but here’s one more—and it also includes a rollicking Schumann with which you can’t go wrong. Very highly recommend.