You are here: Home / Books / Book Review: “The O’Briens”— A Grand Family Epic

The O’Briens is a good sink-your-teeth-into read that explores the capricious nature of destiny with grace and humor while showing great compassion for its characters. 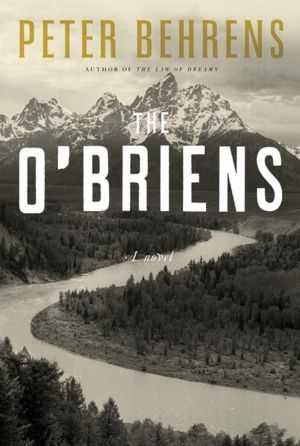 One of the great joys in life is reading a sweeping family novel that is filled with insight about the relationships between parents and children, husbands and wives, brothers and sisters. It is what interested Tolstoy in both Anna Karenina and War and Peace. (Anna Akhmatova famously said that the latter was not a portrayal of the Napoleonic Wars but “a good old family novel.”) It is what interested Jane Austen, Dickens, Trollope, Eliot, James, Balzac, Proust, and the Brontes in the nineteenth century, and in the twentieth, there is Mann’s Buddenbrooks, our own Willa Cather, Saul Bellow in The Adventures of Augie March, and the great master of the genre, Isaac Bashevis Singer, as well as Virginia Woolf and James Joyce, for what are To The Lighthouse and Ulysses but great family novels?

More recently, there is Larry Woiwode’s Beyond the Bedroom Wall, Shirley Ann Grau’s The Keepers of the House, Jeanette Haien’s Matters of Chance, and Jeffrey Eugenides’s Middlesex, as well as the work of Robb Forman Dew and Alice McDermott. And although many of our best younger writers are interested in families and Salinger insisted that his Glass stories, taken as a whole, were really a family novel, not many writers nowadays attempt the somewhat old-fashioned generational saga. That takes a stubborn belief in the beauty of chronology, and a willingness to set the family within a historical context, as well as a trust in the reader to make the connections implicit in such a narrative.

So it is with particular pleasure that I recommend The O’Briens by Peter Behrens, a Canadian-born writer who lives in Maine. Like his first novel The Law of Dreams, which began with the Potato Famine in Ireland, this second novel is about Irish immigrants to America but starts at the beginning of the twentieth century in Pontiac County, Quebec when Ellenora O’Brien receives word that her husband Michael has been killed in South Africa. Her oldest child, Joe, is 13, and as soon as he hears the news he

understood that his father had left his power behind, and that he, as the eldest son, had inherited it. . .The power was nothing supernatural or even extraordinary; it was just a sense of his own inner strength. It gave him self-confidence and boldness. And he wouldn’t squander his power the way his father had; he would use it to protect them all.

Behrens is a beautiful writer, and in clean, vigorous prose, he shows us how Joe takes charge, doing what has to be done, from beating Mick Heaney, Ellenora’s new husband, because he has been molesting the O’Brien girls to making the decisions about where the children are to go after Ellenora dies. By then Joe is 15 and an entrepreneur in lumbering and after he has dispatched Tom to the Jesuits and the girls to a nunnery, he decides that he will go west and work on the railroads now being built in the Canadian northwest. His brother, Grattan, who also has a mind of his own and will become more important as the story unfolds, has also decided to go west, though not with Joe. What follows is a wonderful adventure story of a young man on the move, and Behrens never loses sight of Joe, built like a tree, as stubborn as a tree, who is the lynchpin of this book.

After Joe marries Iseult Wilkins, who has come to California because she needs a place to breathe, literally (she is an asthmatic) and figuratively, Joe is challenged in ways he never dreamed by this woman who yearns for the intimacy he can give only intermittently. Their struggles are poignant and familiar, though sometimes a little repetitive (my only caveat about this novel), and there were times when I felt like shaking Iseult, who couldn’t seem to learn that you don’t marry a man to change him and that there are ebbs and flows in every marriage. Indeed that is one of the major characteristics of a marriage. But she never seems able to understand that along with Joe’s abilities and passion and success come his weakness for drink, which means occasional binges in a good hotel in New York.

The one who has the best grasp of reality is Grattan’s wife, Elise, who is Jewish and pregnant when she and Iseult and Joe meet, a fabulous photographer who teaches Iseult her craft. As the novel follows the century and roams all over the American continent and into Europe during both the First World War and the Second, Behrens proves himself a master at setting as well as character. And as the children of Joe and Iseult and Grattan and Elise take center stage, we stay interested because the subtleties of the relationships, which Behrens sometimes shows, sometimes tells. One of his great gifts is the ability to select the events that reveal the challenges for this family; he is not afraid to leap in time; moreover, his command of the material is so good that you never feel that you don’t know where you are.

And even when death dares to invade this apparently impermeable family, even when Joe can no longer protect them from the inevitable, Behrens never descends into the sentimental or maudlin. Most of the last third of The O’Briens has to do with Joe’s son, Mike, in the Second World War and the events that ensue, and although they are painful and unexpected, the family remains intact. The last chapter is a kind of epilogue. Joe, while sailing on Cape Breton with a beloved grandchild, Maddie, muses on the story’s resolution, for him and for the reader:

[He and Iseult] had damaged each other, damaged themselves. . . But they had kept the family together, sustained. She hadn’t left him for the swami after all. And he had eventually pulled himself out of the neck of the bottle. Suffering had brought them together, though at the time it seemed it would tear them apart. Their marriage had been there to save them from drowning.

This is a novel whose vision affirms life in the very best ways. A good sink-your-teeth-into read that reveals the capricious nature of destiny with grace and humor and great compassion for its characters. A book to stand on the shelf next to the family novels mentioned above.

Roberta Silman is the author of Blood Relations, a story collection; three novels, Boundaries, The Dream Dredger, and Beginning the World Again; and a children’s book, Somebody Else’s Child. She can be reached at rsilman@verizon.net.