You are here: Home / Books / Book Review: Unearthing the Lost Culture of Mathematics

Between Raphael and Galileo: Mutio Oddi and the Mathematical Culture of Late Renaissance Italy by Alexander Marr. University of Chicago Press, 384 pages, $45. 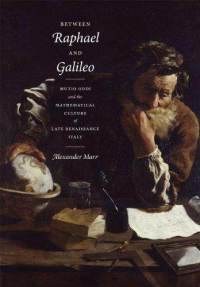 Who was Mutio Oddi (1569–1639)? He exemplifies the protean career of a late Renaissance mathematician: part Urbinate exile, part pedagogical entrepreneur in Milan, and part fortifications engineer in Lucca. In his fascinating biography of Oddi, historian Alexander Marr explores the various currents that shaped his life, using Oddi’s career to dramatize the practice of mathematics in its cultural, pedagogical, material, and artistic contexts.

The book is divided into four sections and contains 82 images. In the first part, the author shows how Oddi, who fell out of favor with Urbino’s prince, was expelled from his homeland. Though Oddi settled in Milan and Lucca, his early years in Urbino shaped his personality and interests. His tutelage under Guidobaldo del Monte inspired his exploration of quantitative mathematics, and his early training in art encouraged his predilection for design. Oddi was also conscious of his hometown’s rich intellectual legacy, something that he hoped to build on despite his fears that Urbino was in cultural decline. Though internecine struggles prevented Oddi from a homecoming until his final years, promoting his Urbainate tradition remained a priority throughout his well-documented career.

While scholars such as Mario Biagioli, James Bennett, and Eric Ash have explored the occupational lives of workaday Renaissance mathematicians, none have unearthed enough data to provide a book-length analysis of such figures. Studies of mathematicians of the period have proven difficult to complete because there’s so little verifiable information about their lives. Deftly examining Oddi’s correspondence and papers, Marr eloquently depicts the quotidian world of Renaissance mathematics and provides a comprehensive biography of a forgotten mathematician.

Defending his focus on a marginal figure, the author reminds his readers that “men such as Oddi -—ingenious but not geniuses, representative rather than radical —- were as much a part of late Renaissance science as a Galileo or a Boyle.” Marr’s insights into the cultural milieu of seicento Italy also brings welcome insight to an era that has been relatively understudied by Renaissance historians.

Marr chronicles the trials and tribulations of an intellectual survivor in the second section of his work. Generally, mathematicians could not survive on their teaching stipend, which compelled them to work multiple jobs for cash and gifts. Oddi, for example, obtained a mathematical chair at the Scuole Piattine in Milan, but had to supplement his income by teaching architecture to local stone cutters and through private tutoring. Though he hoped to mentor elite students in mathematics as a part of their well-rounded education, Oddi also ended up mentoring foreigners, artists, architect-engineers, and even a woman.

Furthermore, the curriculum of his private lessons had to be tailored specifically to the needs of his clientele. In an extended analysis of Daniele Crespi’s oil painting Mutio Oddi and Peter Linder (early 1620s), the author emphasizes the centrality of social interaction to late Renaissance mathematics. Marr also investigates Oddi’s curiosity about optics, burning mirrors, and conic sections.

Oddi’s mathematical interactions also resulted in the production of tangible objects. The author claims that “mathematics was hungrily being consumed by a swiftly expanding public eager for its material manifestations.” In terms of publishing, Oddi not only was involved in the distribution of texts but also produced four of his own. His production is impressive: printing was difficult for someone of Oddi’s modest financial stature because it was a costly endeavor. By analyzing distribution records for the roughly 350 copies of Oddi’s Dello squadro trattato, Marr reveals how text circulation cemented patronage relationships and amicizia in Oddi’s network.

By giving bound copies to elites, sharing unbound versions with his students, and selling the remaining copies, Oddi strengthened and expanded his network of support. It helped him procure social and intellectual credit that was otherwise difficult to acquire in a precarious mathematical culture. Selling practical mathematical instruments served similar ends; Oddi acted as a broker and remote technical consultant for Urbino’s famed Oficina di strumenti matematici. Along with book publishing, the budding market for scientific instrument production helped bridge the gap between courtiers and artisans while tying mathematics to design.

In the final section of his book, Marr illustrates how Oddi’s mathematically inflected sense of disegno, the practice of drawing, was applied to his architectural sketches and became part of his wider intellectual paradigm. Oddi’s drawings reveal an Albertian inspiration of perspective combined with the Urbinate infatuation with geometrical proportions.

Marr’s tack is more roundabout when exploring the Oddi’s cultural vision, fostered by an extensive analysis of a portrait of the Linder Gallery Interior (mid 1620s), a painting completed by an artist in the circle of Jan Breughel the Elder. Noting that Peter Linder was one of Oddi’s friends, Marr shrewdly shows how a mathematician’s presence permeates the work. Analysis of the piece reveals Oddi’s yearning for his lost patria and his ambivalence concerning what at the time was the most accurate cosmological model of the universe. More important, the painting portrays mathematical materials mingling with paintings and sculpture, showing that mathematics and art were inseparable from the idea of design.

By the dawn of the seventeenth century, however, many Renaissance intellectuals had divorced an artistic, imaginative disegno from the pragmatic nature of mathematics. But Oddi’s portrait, compared with pictures of previous mathematical fathers of disegno reveals that, in at least some circles, the traditions uniting mathematics and art under the umbrella of disegno were still powerful. In an era when mathematics and art had not yet become distinct disciplines, Oddi’s various interests encouraged him to engage in both worlds before they were separated.

Though Marr asserts that Oddi bridges the ethos of Raphael and Galileo, his version of his subject — whose entire lifespan was contained within Galileo’s — suggests that Oddi had more in common with his scientific contemporary than his artistic predecessor. Like Galileo, Oddi privately tutored mathematicians, supplemented his intellectual pursuits with instruments, and had his texts printed in the vernacular. Oddi also relished the use of disegno, a trait that the author links to Raphael, but acknowledges is true for Galileo as well.

Thus Raphael, whose name appears infrequently throughout the text, supplies fewer strong links to Oddi. The mathematician’s ties to Raphael are that he collected the artist’s drawings and ultimately resided in Casa Santi, the house of Raphael’s birth. While these facts make a compelling case for Oddi’s connection to Raphael, the bonds that unite these men could have been examined in more depth.

Nevertheless, Marr does a praiseworthy job of delivering the intellectual goods. His research is impressive, and his contribution to the history of Renaissance mathematics significant. Wielding the skills of both an art historian and a historian of science, the author breathes excitement into Oddi’s knockabout life. Elegantly written, cogently argued, and filled with trenchant artistic analyses, Between Raphael and Galileo: Mutio Oddi and the Mathematical Culture of Late Renaissance Italy exemplifies interdisciplinary studies at their best.