You are here: Home / Books / Book Review: An Invaluable Testament to When Movies and Criticism Mattered

What drives serious writing about film? When Movies Mattered suggests an answer: it helps for a critic to take a side, not as consumer advocate, hipster crank, or box office predictor, but as a passionate advocate for standards, often taking on the role of separating overpraised films from the unfairly neglected.

When Movies Mattered: Reviews from a Transformative Decade by Dave Kehr. University of Chicago Press, 290 pages, $22.

Arts Emerson is hosting Movies Matter, a weekend (September 16–18) of movies chosen by film critic Dave Kehr. The line-up include Sailor’s Luck and Me and My Gal, two Raoul Walsh films from the early 1930s, Walter Hill’s The Driver, and Wim Wenders’s The American Friend. Kehr will be present during the September 16 screening to talk about the films and to sign copies of his book. 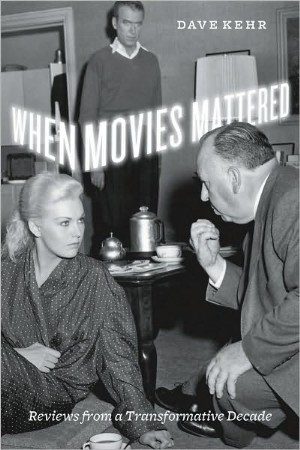 When Movies Mattered is a powerful collection of long-form, journalistic film reviews—trenchant, insightful, earnest (sometimes to a fault)—that over and above its undeniable value as criticism suggests what film reviewing has lost since the pieces in the collection were published (1974–1986) in the weekly Chicago Reader. In his introduction to the volume, Dave Kehr claims he can’t find film reviews on the Web that are longer than a couple of hundred words (I don’t think he has looked nearly hard enough); those who want to use unlimited online space to maximum effect should carefully examine how this book evaluates films for an intelligent, non-academic readership.

Steeped in the history of film and literary analysis (Kehr was an English major, and you can tell), When Movies Mattered serves as an invigorating testament to what the critic calls in his introduction “a period of tumult and possibility, when movies were central to the cultural discourse, and we had the time and inclination to take them seriously.” The catch, of course, is that more often than not the stars do not align: judge as articulately and passionately as they wish, critics still may not find there’s as much room as they would like in the cultural discourse for what they review. Marginality is often a matter of timing, but the evaluative task of criticism should remain its bedrock.

The irony of this book is that while it provides a model of good, journalistic film criticism, it also indirectly shows us the price of taking movies seriously today—increasingly it means taking them academically. Kehr’s reviews can be seen as a contributory step in the process of reviews drifting into Ivory Tower explication.

So, what does When Movies Mattered teach about writing thoughtfully about film? First, as a caveat, many readers won’t belly ache, but it is disappointing (to me) that the reviews gathered here are all positive: Kehr waxes enthusiastic about the best films of the year, foreign and domestic, the former from predictable, A-list directors (Jean Renoir, Eric Rohmer, Luis Buñuel), the latter more surprising (Blake Edwards, Clint Eastwood, Paul Brickman). How do you judge a critic’s judgment? Not only by evaluating why he likes certain films, but why he dislikes others. Surely taking films seriously—regardless of where they happen to stand in the cultural discourse—means carefully discriminating between the superior and the mediocre. In addition, accentuating the positive goes hand-in-hand with a mainstream media that increasingly finds little time for negative analysis.

The latter gripe made, the admiring reviews in When Movies Mattered are exemplary because Kehr does not pile on the overheated adjectives, wallow in star-gazing, or mistake attitude for thought: he resolutely and paintakingly explains—using concrete examples from the films to back up his aesthetic and stylistic judgments—how and why the director accomplishes what he did. In some ways, this kind of criticism is more difficult to pull off than writing a straight pan because the vocabulary of value has become thoroughly debased: the decay of criticism into blurbs (on and off the Web) has turned hyperbolic verbiage into the inflated coin of the reviewing realm. In contrast to that misbegotten approach, Kehr’s volume contains dozens of striking examples of sharp-eyed, smart, illuminating, evaluative analysis.

Here is a chunk from Kehr’s review of Japanese director Mikio Naruse’s When a Woman Ascents the Stairs—note his sensitivity to how the manipulation of screen space shapes the viewer’s response:

Naruse uses close-ups sparingly but brilliantly. It suggests something of Naruse’s perversity that he uses more close-ups in the wide-screen When a Woman then in the standard ratio Floating Clouds, when the conventional wisdom dictates that close-ups look awkward and out of place in scope films. But Naruse doesn’t put his close-ups to the conventional use, as a way of embracing and intensifying emotion (his actors invariably play their most dramatic scenes in medium shot, generally with their backs to the camera). Instead, they represent a momentary reprieve from the prison of space—moments when the characters are taken out of their emptiness and allowed to fill the screen with their own individuality.

Flip through the book, and you will discover your own favorites: the section on four films directed by Jean-Luc Godard and a meditation on Carl Theodore Dreyer are meaty delights, while the reviews of Martin Scorsese’s After Hours, Luchino Visconti’s The Leopard, Sergio Leone’s Once Upon the Time in the West, and Luis Buñuel’s That Obscure Object of Desire will make you want to check out the films again. Some of the critiques are, well, peculiar—Otto Preminger’s The Human Factor and Albert Brooks’s Lost in America don’t justify their encomiums. Still, you can quarrel with Kehr’s verdicts but still learn from and/or appreciate how he arrives at his conclusions. He provides the rational scaffolding for his judgments—and that is what the best criticism (of film and otherwise) is all about.

What else drives serious writing about film? When Movies Mattered suggests an answer: it helps for a critic to take a side, not as consumer advocate, hipster crank, or box office predictor, but as a passionate advocate for standards, often taking on the role of separating overpraised films from the unfairly neglected. Kehr is an unabashed, auteur critic, in the sense that he prizes the personal voice of the director, especially in Hollywood films—for him, commerce is not necessarily a bar to art. His critical stalking horse is the arch, anti-auteur Pauline Kael of The New Yorker, who valued Tinsel Town for its trash, which for her glitters like fun fool’s gold. In true Dostoevskian fashion, Kehr sounds most like Kael (dismissive, Olympian, snarly) when he mentions, only to deep-six as trite, some of her favorite film makers of the period, such as Robert Altman, Brian DePalma, and Steven Spielberg. (It would be instructive to read Kehr’s reviews of Nashville and Jaws.)

As Kehr points out, Kael won some battles at the time, but she lost the war. In his thoughtful pieces on films from American directors, Don Siegel, John Carpenter, Clint Eastwood, Raoul Walsh, and Blake Edwards among others, the critic shows that they should be evaluated not as Hollywood hacks but as film artists working within and in some cases extending a rich genre tradition.

Yet he presses much too hard at times to defend their legitimacy, undercutting his case as well as the cerebral strengths of his criticism. You can respect but reject Kehr’s insistence on what he sees as the tragicomic complexity in the films of Edwards. But the critic goes off the deep end when he stops reacting to the concrete, visual evidence of the movie, reaching for a highbrow framework that will confer frou-frou value instead. For example, here he is pumping up Clint Eastwood’s film Sudden Impact: “At this deeper level, Eastwood’s films are much more psychological than political; in instances like The Gauntlet (1978) and now Sudden Impact, they approach something Jungian in their deployment of large, primal images.” Somewhere, Kael is laughing at “something Jungian,” and it is impossible not to join in. And is that not a “floating signifier” I spy in the review of the late Raul Ruiz’s City of Pirates?: “Losing their centeredness, their core of meaning, the images are liberated from the system of language; they no longer occupy fixed positions in a hierarchy of meaning, but are free to signify anything and nothing.”

Truth is, Kehr claims to be uncomfortable with the abstractions of academic film criticism, but it is easy to see how the reviews in When Movies Mattered could have inspired a thousand graduate film theses—the Jungian vision of Clint Eastwood, the Freudian existential of Raoul Walsh, etc. After reading Kehr’s all-so-determined attempt to enthuse about Fedora, Billy Wilder’s exhausted final film, you can’t help but pine for the days when Wilder could be breezily dismissed as a middlebrow by Dwight Macdonald. The earnestness of the Wilder piece brings up one of the collection’s shortcomings—the reviews lack a sense of humor. There’s not a lot of laughs in these pieces, as if writing about film seriously meant remaining sober at all times (auteurist do or die), and that is not necessarily so.

But the lit-crit huffing and puffing doesn’t overwhelm the collection’s considerable merits—the best reviews in the volume are free of theoretical dross and offer perceptive evaluations of what Kehr saw on the screen. His sophisticated prose style also suggests how the language of journalistic film criticism has changed over the decades: the anti-intellectual Kael wanted criticism to be conversational, free-wheeling reactions. The gap between the approaches of Kehr and Kael has widened considerably: at this point, little common ground remains. There’s a growing, critical no-man’s land between the Tweeterites and the snooty academics. Journalism used to be a rhetorical bridge between the rigorous and the relaxed, but technology has washed it away. Few contemporary, mainstream publications let their critics have the column inches and intellectual license that the Chicago Reader thankfully give Kehr four decades ago. As Kehr points out, Kael couldn’t clear her throat in the column inches The New Yorker hands its current film critics.

Luckily, Kehr has found a critical niche, continuing to write about films with rigor despite the near extinction of incisive film reviewers in the mainstream media. He left the Reader to become the chief film critic of the Chicago Tribune, then went to New York where he became the reviewer for the Daily News, leaving that publication to write the “At the Movies” column for the New York Times as well as to contribute to other publications. (He blogs here.) When Movies Mattered lets us see what happens when a first-rate critic gets the leeway to go full throttle—and it is a sight to behold.