You are here: Home / Music / Music Review: Bon Iver is “Not Magnificent,” but Transcendental

Sitting down this evening to review Bon Iver, something happened. My strongly negative initial impressions of the album changed into an appreciation of the mystical spirit of the music, its harmonious chords and their reflection of the harmony of nature. 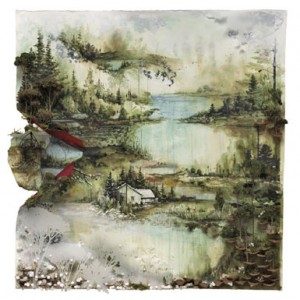 My first impressions of music rarely change, and dissenting opinion seldom sways me.

Upon first hearing the woven, electric sounds on Bon Iver’s (singer-songwriter Justin Vernon + band) latest album, Bon Iver, the layered harmonics became tangled, overwhelming me. I felt alienated. I missed the rustic, organic guitar and strings from For Emma, Forever Ago that had reminded me of the romantic yet grungy country roots I never had. I didn’t like Bon Iver. And so it was decided.

Yet, when sitting on my back porch in suburban twilight this evening to review Bon Iver, something happened. Vernon’s sound waves synchronized with the rhythm of the setting sun, the celestial blue and pink pastels. Dwarfed by transcendentalism, I caught the echoes of the wilderness Vernon heard in the Wisconsin back country (where he wrote the album); I felt the harmonious chords reflect the harmony of nature, and I could feel the mystical spirit of Bon Iver. Things were different.

It’s possible that this change of heart only occurred because Vernon’s vast, musical environments on the album matched my own experience of sunset. I was inspired by this synchronicity—and I won’t enjoy the record nearly as much next time I’m listening indoors. But this revelation suggests that perhaps the natural environment is essential to enjoying Bon Iver. And here’s why . . .

Bon Iver opens with “Perth,” featuring warm, electric guitar, breathy “oohs,” drumline snare, and Vernon’s trademark falsetto, which creates a full, if draggy, surround sound. The arrival of quickened drums and perfectly intertwined bass add much needed momentum. “Minnesota, WI” is made up of the same electric components as “Perth” and also lacks excitement. Still, their indescribable feeling of vastness” sets the tone for Bon Iver.

The first captivating piece, “Holocene,” features harmonies of acoustic finger-picking, dissonant voices, and brushed percussion. While the imagery in the lyrics is jumbled, the repeated, raw falsetto delivery of the line “And at once I knew, I was not magnificent,” combined with the melancholy chords, generates a effecting wave of disappointment. Ralph Waldo Emerson was overwhelmed and humbled by his natural environment; “Holocene” draws on that same sense of awesome beauty. Truly enchanting.

That being said, “Towers” is undoubtedly the best tune on the the album because it is the most commercially appealing. The opening electric guitar hook churns up a propulsive momentum that provides energy without any help from percussion. The lyrics are (for once) comprehensible, while remaining mysterious. But what hooks listners most about “Towers” is the sublime wall of sound it creates, whose warm waves surround the listener like a warm blanket. A cliché description? Exactly. That’s why “Towers” works.

After “Towers,” however, the rest of Bon Iver languishes. “Michicant” is a gentle waltz with flittery, electric guitar, but the piece doesn’t grow in interesting ways from there. Along the same lines, the deep-voiced “Hinnom, TX,” piano-based “Wash,” electric noise of “Lisbon, OH,” and breathy “Calgary” don’t travel anywhere spectacular. The album ends rather oddly, with the out-of-place “Beth/Rest,” whose electric guitar recalls riffs that populated the title tracks on cheesy, 1980’s films.

And so, as the sun fades into night, Bon Iver presents a paradox. Although most of the album is repetitive, a few of the songs have a voluminous quality that can fill the celestial ceiling in a magical way—and would probably do the same in any gilded concert hall.