You are here: Home / Featured / Fuse Theater Review: Is This Musical Really Necessary?

After four movie versions of Alexandre Dumas’s nineteenth-century novel, does it make any sense to make a musical out of The Three Musketeers? The film versions efficiently present the book’s mix of comic book mayhem and romance and are available on DVD and video.

I can’t think of any successful swashbuckling musicals, except for Cyrano, which ran for 49 performances on Broadway in 1973. For over a decade, the creators of The Three Musketeers musical have been trying to buck the trend. I admire their tenacity, but I am skeptical about the effort. Anyone who has read Dumas’s overstuffed book (I did years ago) can testify to the plot’s exhausting round-de-lay of digressions and blithe lack of dramatic focus. Publishers paid by the word in those days, and Dumas (along with his team of ghost writers) figured that over seven hundred pages of convolution meant more cash.

The Boston reviews of the North Shore Music Theatre production of The Three Musketeers, a New England premiere said to be Broadway bound, were mixed, though I found two unadulterated raves. Most critics didn’t go so far as to question the wisdom of the project, but donned the Elliot Norton play-doctor smock, offering prescriptions for how the patient could be perked up or cured, sensibly suggesting that the plot-heavy musical should take its cues from the streamlined movie versions of the Dumas book. Variety reports the producers are open to ideas for revision. Who knows, maybe the critics are coming up with the right medicine? 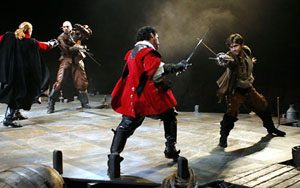 But is a musical version of Dumas’s epic ramble of an adventure novel, as Carolyn Clay of the Boston Phoenix believes, a good idea? Yes, the show comes with instant name recognition. But besides snaring the attention of audiences eager for an action-oriented retread of Les Misérables, what is the point? Perhaps it is boomer nostalgia for the movie versions of the Dumas yarn. A slew of new shows, such as Young Frankenstein, Legally Blond, and Xanadu, proffer the same vampiric relationship with Hollywood.

In truth, The Three Musketeers may be showing its age. A new translation of the tome was published about a year ago, and critics took the occasion to speculate about the story’s appeal, which some found to be slipping badly. The New York Times reviewer argued that the “pure nuttiness” of Dumas’s eccentric prose, along with the contortions of the book’s plot, makes The Three Musketeers peculiarly modern. In Slate, Michael Wood perceptively talked about how the ungainly book differs from the sentimentalized movie versions.

“Conspiracy is everything, and the more pointless the better. This is the novel’s most infuriating feature if you are looking for straightforward sense and consequence, and one of its most subtle forms of appeal if you are ready to see d’Artagnan as some sort of cousin to Balzac’s Rastignac and Stendhal’s Julien Sorel. These are Young Men from the Provinces and they are going to make it. Making it, then as now, in France and elsewhere, requires a total indifference to what else gets made or unmade in the process.”

Dumas is one of the first examples of the writer as a manufacturer of fiction; he managed an assembly line of scribblers who spit out novels and plays for which he took the credit. So it should come as no surprise that underneath the charming derring-do trappings of his historical romance – the acrobatic swordplay, coarse melodrama, and sexcapades – sits a steely celebration of men and women doing anything to get ahead.

George Bernard Shaw admired the energetic amorality of Dumas’s fiction and plays, reveling in their “humorous clearsightedness… his stories are always light-hearted and free from that pressure of moral responsibility without which an Englishman would burst like a fish dragged up from the floors of the Atlantic deep.” American musicals trumpet “moral responsibility” and Dumas is no inspirational tearjerker on the order of Victor Hugo. The Three Musketeers has been repeatedly Hollywoodized, so why make a musical version of the Dumas warhorse? At this point, I think an attraction at a theme park, along the lines of Disney’s Pirates of the Caribbean, makes more sense.