Most great novels generate an organic, imaginative vision rooted in a sense of inevitability in the way they unfold; Chris Adrian’s The Great Night loses some steam because it fails to coalesce, to concentrate its myriad energies. 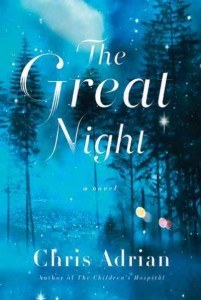 Born in 1970, Chris Adrian has been praised as one of the most promising writers of his generation, and now, in his third novel and fourth book (he also has a book of stories called Better Angels), he has given us a modern retelling of Shakespeare’s A Midsummer Night’s Dream. This is an ambitious project that has its strengths but also its weaknesses.

Three people, Henry, a gay pediatrician with obsessive compulsive disorder; Molly, a child of Christian evangelists who reminded me of Clyde Griffiths’s family in An American Tragedy; and Will, an arborist whose dead brother hovers over his life and recent love affair, find themselves in Buena Vista Park in San Francisco, all on their way to Jordan Sasscock’s party. All three are fugitives from failed relationships and are linked to one another in bizarre ways that unfold as the novel progresses.

In the present, though, they get lost and become entangled, literally and figuratively, with a bunch of the fairy characters from Shakespeare’s play: Oberon, Titania, Puck. Titania is on a tear because of the death of her changeling adopted boy from leukemia and determined to cause as much mischief as she can. However, what distinguishes this novel from Shakespeare’s play is that Adrian is much more concerned with mischief than romance. Here the stakes are much higher, thus giving the novel an edge and also a strange looseness that makes it read at times more like a captivating pastiche than a novel.

Yet lots of novels are really connected stories in which the reader is invited to make the connections, and, in a sense, that is what Adrian does while also linking them as modern “merry wanderers of the night.” And although Titania provides the main thread that runs through the book, it is those back stories that have the most heft and are most memorable. They can stand on their own, indeed, have stood on their own. Molly’s origins are explored in one, her love affair with Ryan in another. There is also Will’s first encounter with Carolina, their backgrounds that involve unstable brothers, and Henry’s clueless gratitude towards his partner Bobby in a scene that is heartbreaking.

The most beautiful and fully realized piece is Titania and Oberon’s story, with the fairies struggling to save their “boy” from the inevitable. Their total ignorance of the ways of the real world as their “boy” dies in a modern hospital is as good a story as I have read in a long time. Some of you may remember it when it was published in 2009 in The New Yorker as a story called “A Tiny Feast.” In this section, we see Adrian at his best, calling on all the resources he has as both a pediatric hematologist at University of California at San Francisco and a graduate student at The Harvard Divinity School in Cambridge, MA. For unlike most of us who proudly call ourselves writers, Adrian is a man of many talents, for whom writing is just one.

And this may be the crux of the problem with The Great Night. It is a great idea to retell Shakespeare’s marvelous play, and his themes are also the Bard’s—the course of love that never runs smooth, “what fools these mortals be,” the trials inherent in marriage, the dangers of vengeance, the tantalizing temptations of mischief as exemplified by Puck, the seduction of magic—but to do that requires a kind of control and ability that may not yet be in Adrian’s grasp. Most great novels generate an organic, imaginative vision rooted in a sense of inevitability in the way they unfold; this novel loses some steam because it fails to coalesce, to concentrate its myriad energies.

Although Bottom appears in the novel, the play that is also being produced in Buena Vista Park on this harum scarum night bears no relation to Shakespeare’s play within a play about Ovid’s characters, Pyramus and Thisbe. Instead, it is an adaptation of the 1973 dystopian movie Soylent Green, based on a 1966 science fiction novel by Harry Harrison. By introducing the themes of overpopulation, pollution, poverty, and dying oceans, Adrian combines his love of science fiction (one of his favorite authors is Ursula Le Guin) with his love of Shakespeare.

But those sections of the book, motivated by vengeance towards the mayor of San Francisco, are stuffed to the brim (Adrian also loves Richard Scarry), and sometimes seem too clever by half. They also interrupt the flow of the story. Still, you can argue, so does the play-within-the-play in Shakespeare, and that we have gotten used to it.

So, at the end of this complicated novel that really requires more than one reading, we are left with an intriguing, post-modernist novel that is also exploring the boundaries of the novel while retelling a 16th-century play, filled with puns (he’s very good), sex (sometimes a bit boring), and references that can boggle the mind. Thus, The Great Night may have enormous appeal for those who like a “new-fashioned” novel. An example of its charm occurs while Will and Carolina are having a picnic:

“Absolutely,” she said. She lay on her back with her feet on the tree, her hips bent almost at ninety degrees. Will sat cross-legged at her head, staring down at her face.

Irresistible, really. And the more I reread, the more pleasure I seemed to get. Thus, we can only wait to see what this enormously talented writer will come up with next and go back to the earlier work to see where he has been before.