This year marks the 250th anniversary of Mozart’s birth and just about every classical performing group is paying tribute. Enterprising souls are marketing everything from standard keepsakes to off-the-wall Mozart items. Mozart Salami, anyone?

Among the more erudite celebrations of the event is Stanley Sadie’s “Mozart: The Early Years,” the final opus of an esteemed classical music scholar. Sadie, former music critic for “The Times” of London and editor of the monumental “New Grove Dictionary of Music and Musicians,” had planned a second Mozart volume, but didn’t live to complete it. After reading this book, it’s no surprise to me that he ran out of time. 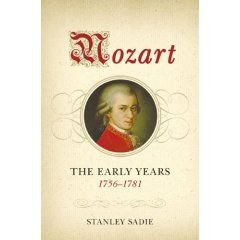 “Publishers Weekly” calls it “indispensable for serious scholars.” No argument there. But publisher W.W. Norton hopes it will appeal to amateur Mozart enthusiasts. This is doubtful, unless a judiciously edited version is made available. In its current form, only musically literate scholars will enjoy and fully appreciate Mozart: The Early Years. Initially, I tried to approach the book as a “lay reader” might and quickly realized I wouldn’t get too far. So I continued as the “hybrid reader” I am – someone with no musical degree, but lots of practical experience. As a former violist and current pre-concert speaker for the Boston Classical Orchestra, I found myself mining the depths of Sadie’s scholarship for interesting anecdotes related to Mozart’s life and compositions. This approach was much, much better — in fact, pretty darn useful for enlightening concert audiences and making my talks fresher!

What I truly loved most about Mozart: The Early Years was the human element, particularly the development of the father-son relationship. Leopold Mozart, Wolfgang’s father, was a Salzburg-based court composer and violinist who immediately recognized his toddler son’s genius and worked tirelessly to develop his skills and promote him. Leopold knew only too well that 18 th century musicians needed royal or aristocratic patronage in order to survive. When Wolfgang was only seven years old, Leopold packed up his entire family (wife Anna, Wolfgang, and talented big sister Nannerl) for a three-year grand concert tour of Europe . Sadie brings all the facets of this incredible journey together with great detail. Frankly, it made me want to see filmmaker Milos Forman take on “Amadeus: The Prequel.”

Sadie’s extensive use of family letters is a real strength of this book. For example, he shows how Leopold Mozart felt it was his duty – as a German and a Catholic – to display his children to the world. He explained in a letter during this tour that he needed to proclaim… “a miracle, which God allowed to be born in Salzburg . I owe this act to Almighty God, otherwise I would be the most ungrateful creature: and if ever I have an obligation to convince the world of this miracle, it is precisely now, when people ridicule anything that is called a miracle and deny the existence of miracles.”

The family letters (many previously unknown) are the backbone of Mozart: The Early Years. The occasional excerpts from eyewitness accounts, other letters and “ad copy” are enlightening – and sometimes downright funny. I also appreciate Sadie’s take on Mozart’s budding adulthood, particularly his first taste of freedom from Leopold. The chapters on his visits to Mannheim and Paris are especially riveting. Wolfgang was 21, accompanied only by his mother, and on his way to Mannheim, an important musical center. Papa Mozart was unable to go, so he took out a huge loan and did his best to ensure his son’s success:

“Leopold had dealt with all the troublesome minutiae of their journeys: planning the routes, choosing the mode of travel and booking the coaches, finding inns or monasteries for their lodging, seeking out and meeting the local musicians to determine whether a concert could profitably be arranged and then arranging it, organizing the actual music from which they could play (which often had to be copied locally), ensuring the right potential patrons were approached and in the right way with the appropriate letters of introduction, and dealing with countless other difficult issues. . . It was essential that the journey be at worst self-supporting.”

Before this tour, Leopold and Wolfgang had never been separated for more than a few hours. Unfortunately, the result was disastrous for the entire Mozart family: Anna Mozart died in Paris, no job offers materialized, and Leopold was left deeply in debt. Sadie truly brings these chapters to life for the modern reader and gives us the context we need. But, as is the case throughout the book, each chapter ends with in-depth chronological dissections of each composition.

So, I’ve put together some suggestions for enjoying – and I do mean “enjoying” – Mozart: The Early Years if you aren’t a music scholar:

Don’t even think about reading it at the beach
Read the first part of each chapter. When Sadie begins in-depth accounts of the musical compositions, skim quickly to the end
Seek out the family letters, eyewitness accounts and connecting textOne final thought: “Mozart: The Early Years” would be very good online! An editor would do well to abridge the more technical parts of the text and use them as links for the scholarly inclined. The rest of us could read on without interruption.