You are here: Home / Books / Fuse Theater/Book Review: An Inspiring Defense Of Why Theater is Necessary

In The Necessity of Theater, author Paul Woodruff makes way for wisdom as theater’s final gift. In his view, theater’s wisdom lies in its use of the mask, and that mask is the sine qua non of meaning. The mask must conceal, if only to reveal.

The Necessity of Theater: The Art of Watching and Being Watched by Paul Woodruff. Oxford University Press, 231 pages, paperback, $17.95. 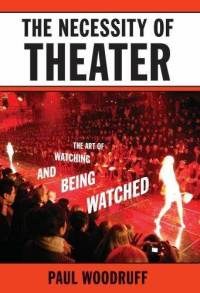 The Necessity of Theater is a compelling, serious, and sustained humanitarian defense of creating and witnessing theater. It is just what the theater worker with time on his or her hands ordered and just what the audience member and theater funder with money in his or her pocket should order. Most likely, however, only the former will avail themselves of the book’s messages, expressed as they are through thoughtful but demanding explanations via examples ranging from Oedipus to the Rolling Stones. There is nothing like justification for what one wants to do or not do, willy-nilly. There is always an excuse not to pay attention, let alone pay.

Controversy about the worth of art in the face of so-called real life is neither new nor winnable, opinion ever taking precedence over fact in the miraculous but fallible human mind. The verbal jousts of Plato and Rousseau’s arguments against theater still cut, but Woodruff is well armed and armored to knock them off their high-minded horses.

The classic, Greek philosophers, from Socrates to Aristotle, devote themselves to discovering and advocating for the “good.” Woodruff counters with the quest for meaning. He defines the purpose of theater as “simply watching.” For him that end is not just good enough, but intrinsically good. The art of theater is about “making the things human beings do worth watching.” Theater’s worth lies in beauty and wisdom, as well as a plethora of pleasant emotions, for their own sake and as relief from uncomfortable feelings, happening in “a measured time and place.”

The delights of Hamlet and football with their conflict and resolution are significantly distinguished in Woodruff’s scheme. Hamlet offers “truth” about character and conflict. Of course, Hamlet is fiction, and therefore all the more able to reveal deeper truth. The logic of worth in real life sports games can lead to unforeseen and unsatisfying ends. Again and again Philostratus’s lions won a meal of bound Christians, but that provided insufficient conflict. Untied, those pesky Christians daringly clobbered those nasty lions, leaving both the Emperor and his beasts undernourished. That afternoon arena endeavor was not worth watching. Beware cultural context. It can make for “bad theater” and “may just be plain bad as well.”

The space of theater should become “sacred,” as loaded and slippery a word as our imagination, also a theatrical necessity, can define. For Woodruff the value of the “sacred’ lies in generating an inviolability of space and then violating it. The path/plot from the “transgression” of characters’ actions (and the transgression of boundaries) to empathetic connections, physically or metaphorically, is the “sacrament” he extols, and expects, of theater.

We learn by mimesis, modeling, the job of the actor. Plato feared that persons watching murderers and such on stage would be altered “for the worse.” Woodruff counters by pointing out the self-awareness of audience and actor, the “complicity” that the imagination makes possible. We do not shoot Iago’s impersonator. As for Plato’s wish that learning rely solely on the “real,” Woodruff  takes the idea of justice and measures it against the often unjust effect of actual laws. Theatrical duplicity “provokes” our critical sense, “engages” our emotions, and “is enjoyable in itself.”

As for the decadence of theatrical enjoyment, 18th-century, French philosopher Jean-Jacques Rousseau believes that “laughter bubbles up from the evil recesses of the human heart,” which is a “disastrous consequence for morals.” Woodruff, in gentle retort, claims that laughter is a “greater comfort” than “weeping in understanding . . . misery” or absurdity. I submit that the human is the only animal that can laugh, a quality and distinction that we should treasure rather than censure.

Woodruff makes way for wisdom as theater’s final gift. In his view, theater’s wisdom lies in its use of the mask, and that mask is the sine qua non of meaning. The mask must conceal, if only to reveal. We are obligated to watch, to watch closely and continually. We can then recognize through that act of careful witnessing who we are, who that other is, and so recognize our responsibility to each other. In such recognition lies the essence and the excellence of democracy.