These two performances showcase a group of instrumentalists whose collective musicianship is electrifying: full of just the right combination of wonder, play, and discovery this much-loved repertoire needs in order to sound fresh and truly come to life. 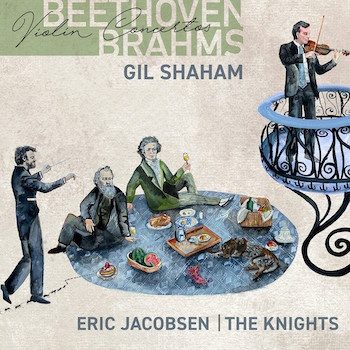 At this point, violinist Gil Shaham has been a fixture in the classical music firmament for so long that one might be excused for assuming he’s recorded the entire canon a couple of times. The reality is not so: Shaham’s discography is remarkably discreet and impressively singular. So it happens that his latest release, which co-stars the brilliant chamber orchestra The Knights and conductor Eric Jacobsen, features the fiddler’s first recording of Ludwig van Beethoven’s Violin Concerto and just his second of Johannes Brahms’s.

Shaham’s Beethoven is worth the wait. It’s torrid: fresh and lively as ever while managing to completely avoid the beguilingly idiosyncratic approach Christian Tetzlaff took a few years back. Tempos in the first movement are brisk — sometimes they even feel like they might be getting pushed too hard — but, while the piece may bend in some surprising ways, it never breaks.

And, with Shaham’s pliant shaping of the solo line, how could it? His playing here is rhythmically engaging, but also full of nuanced dynamics and phrasings. Moreover, Shaham’s rapport with The Knights is total, as evidenced by their unanimity of articulations and overall feel for the first movement’s musical line.

Purity of tone and a glowing sense of atmosphere characterize the pairing’s traversal of the second movement, while the finale is spry and vigorous.

In any normal Beethoven recording, Shaham’s lilting account of the last movement’s minore episodes and his flexible delineation of the phrases leading into the coda would be enough to carry the day. Here, though, the performance includes something even more astonishing, in the form of a wild cadenza (written by Shaham) for soloist, horns, and timpani that simply must be heard to be believed. It’s a small gesture — only about half-a-minute long and coming in an unusual spot (just before the third iteration of the finale’s refrain) — but one that perfectly encapsulates the freewheeling exuberance and musical intelligence of the larger reading.

As in his Beethoven, Shaham’s interpretation of the Brahms offers plenty of drive, a rounded articulation of the solo line, and fiery cadenzas (these by Joseph Joachim). In the first movement, the mixture of textural clarity and purposeful tempos means that the peculiar rhythmic qualities of Brahms’s writing jump out with bracing immediacy. The same happens in the finale, which gambols with terrific spirit.

In between comes a slow movement of singular beauty, marked by serene ensemble-work over the opening bars and, later, some immaculate blending between Shaham, playing flawlessly in his uppermost register, and The Knights’ woodwind section.

Taken together, then, these two performances showcase a group of instrumentalists whose collective musicianship is electrifying: full of just the right combination of wonder, play, and discovery this much-loved repertoire needs in order to sound fresh and truly come to life.

What’s more, this is a release that firmly demonstrates the value of artists committing these well-recorded warhorses to disc only when they’ve actually got something to say about them, rather than just for the hell of it. Shaham and The Knights have plenty to offer in both concerti — and their thoughts are well worth considering.