Path of Totality is a distinctive recording, put together with great attention to form and detail — and performed with enormous skill. 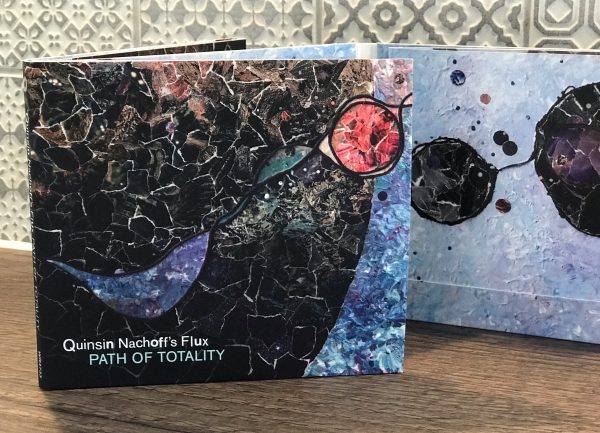 Reviewing most of the music that passes over my desk often means parsing out predictable niceties that vary slightly from one recording to the next; noting tune choice, timbral differences, degrees of “inside” and “outside” performances. This recording, however, forges a unique direction. It is an album I was excited to spend time with and to write about it.

Composer/musician/producer Quinsin Nachoff is interested in and somewhat conversant with physics and other things celestial. The ‘Totality’ he refers to in the title is the period of complete darkness that arrives during a complete solar eclipse. Of course, asserting a theme is fairly common in jazz releases (The Moon, Springtime, Cole Porter, etc.). When it comes to drawing metaphors from science (or, for that matter, from another art form), the result can be folly. That warning aside,  the sonic and rhythmic landscapes Nachoff creates here fit well within the album’s concept of bodies moving in space, into and out of darkness. And, at least in some of the music here, Nachoff moves from the metaphorical to the concrete; he consulted with Dr. Stephen Morris, a physicist at the University of Toronto in his efforts to translate experimental data into musical form.

Nachoff is involved in a number of ensembles, including the Ethereal Trio, Horizons Ensemble, FoMo quartet, and the Pyramid Project. The group on Paths of Totality is called Flux and, aside from Nachoff, it includes saxophonist David Binney, pianist Matt Mitchell, and percussionists Kenny Wollesen and Nate Wood. All are well-traveled, adept musicians, with experience in multiple genres. A number of other musicians are brought in to buttress some tracks.

To expand the sonic possibilities of this recording, Nachoff utilized his status as an Artist-in-Residence at Canada’s National Music Centre and spent three weeks exploring the Centre’s extensive acoustic and electronic keyboard collection. If there are a number of sounds on this recording that are unusual or hard to identify, no doubt this is why.

The title track, “Path of Totality,” begins with a repeated riff by piano and rhythm section, with Nachoff subjecting his dual drummers to unexpected shifts. It sounds like someone trying to walk with one leg periodically giving out. Saxes enter with a unison line and the rhythm section supplies a herky-jerky underpinning. The sax line begins to expand, leading to Binney’s solo on alto sax. That continues with some propulsion, even though the rhythm section enters and exits somewhat randomly. Binney passes the spotlight on to Nachoff on tenor, who plays a compelling-post-Coltrane solo with a personal accent. Piano comping underneath varies widely between consonance and dissonance, with the rhythm section sliding into what sounds like barely controlled bedlam. Both saxes reenter, mostly in unison, but sometimes phasing in and out, embracing entropy until the track suddenly ends.

The notes say that the next tune, “Bounce,” is built on the mathematical model of a bouncing ball. It starts with random synth sounds and moves to a moving piano line that exits once an aggressive trap drum solo takes over. Drummer Nate Wood settles on a definite tempo that summons back the piano and a sparse horn line. False starts dominate and one wonders whether a complete phrase will ever arise. The drummer resumes his solo; once again a tempo is established, this time to set-up a Binney alto sax solo. Drums maintain a steady beat, while piano forcefully manipulates the tempo. The alto sax moves all over the horn, feeding gracefully off a multi-plexed rhythm section. The clear harmony tends toward the minor, then a more suspended feel arrives until both saxes come back in unison. We go out of tempo and synth sounds wash in the background. Nachoff on tenor sax moves “off the horn” for overtones and other sounds. A brief Latin rhythm section seems oddly prosaic in this context, followed by a  number of short sections whose approaches vary regarding meter and harmony. Pointillist piano and drumming follow, then there’s piano alone in an almost romantic mode — with a few glass shards thrown in. A duet with piano and drums follows, of medium energy but utilizing careful listening among the musicians. The intensity builds and saxes enter with a calling riff; sometimes in unison, sometimes phasing in and out. A churning Kimball piano solo leads to the weighty sound of a large organ (a 1924 Kimball Theatre Organ) washing in on top via large chords. Some back and forth between sections bring about a quick close. A visual description that would suggest the feeling of the overall last third of the song might be that of looking at a canvas that contains a number of intricately rendered small boxes with interesting things going on in each; some more and some less obviously linked to others.

The progenitor of “Toy Piano Meditation” is composer John Cage’s 1948 “Suite for Toy Piano.” Here, pianist Mitchell outlines a pentatonic feel including some dissonant notes. Percussion adds various colors with tam-tam, gongs, and cymbals. Saxophones enter with a fragment of the pentatonic riff and then move into a kind of slowed-down call and response with the piano. This prefaces an even more atmospheric section, with piano, organ, and possibly other electronic keyboard sounds. The scene’s very hesitant — evocative of something happening just offstage. Variations on the harmony and multiple tonalities are explored, slowly, in this lengthy section (the track is almost 20 minutes long). Eventually, a more consonant approach returns with the horns’ re-entrance. Marimba, vibes, and glockenspiel sketch out a bare harmony which the tenor saxophonist picks up on in his improvisation, while a stately tempo is suppled by the percussion. The harmony slowly and subtly shifts. The beginning of the track, with its pentatonic scales, had foreshadowed Indonesian Gamelan music. At this point percussion sounds, which clearly refer to Gamelan, delicately color tenor and then alto sax solos. The intensity builds with alto sax and then breaks apart, much as an ice floe might fall apart with a rapid rise in temperature. Binney on alto caps the tune with a final deft cadenza.

“March Macabre” begins with what the album notes characterize as percussionist “Wollesen’s ‘march machine,’ a wooden board outfitted with a row of clomping clogs, [which] provides the marching beat that opens the piece on a totalitarian note.” The sound is a mordant comment on the current political situation in the U.S. — the music reflecting a broken system. Compared to the album’s other tracks, this tune is fragmented, more noise-oriented, and highly varied in timbres. Binney on C Melody sax and Nachoff on soprano sax solo over and under the roughhouse rhythm riffs. Nachoff lets Binney solo as the ‘march machine’ comes and goes. A pump harmonium (think drone in Indian music) played by Mitchell takes off on its own peregrination. Impassive, stoic riffs take over and soprano sax enters, Nachoff slowly building his solo until he seems to be crying into a militaristic wilderness. Trombones, trumpets, baritone sax, and bass clarinet supplement the ranks. With the arrival of this larger section, there’s more “part writing” and counterpoint — until chaos returns to break through and then destroy this relative order. Then, surprisingly, the sounds of tap dancer Orlando Hernández are heard against an ominous backdrop. The backdrop falls away and the dancer is left to end the tune by himself. The album notes explain: “…the lockstep has been broken and individual freedom restored.” I’m not certain about that.

“Splatter” begins with Mitchell on solo harpsichord, which inevitably summons up Baroque music and, for many jazz fans, Sun Ra. Pointillist keyboard playing ensues, with electronic washes in the background. Saxes enter on top of this mix in a way characteristic of this album — partially in unison and partially phasing in and out of each other. Binney’s alto sax takes over as the wash grows in intensity, as does the rhythm section. The alto performance is virtuosic; Binney moves all over the horn, but he maintains a sense of form — each phrase carries onto to the next. The ensemble then splinters apart, with Nachoff on tenor sax threading his way through the density. We then return to both saxes restating their theme, with an ominous rhythm section churn underneath and a final pointillist section, with chaotic synth emerging for the close.

Saxes in counterpoint, their repeating riffs alternating with the rhythm section, establishes the pattern of “Orbital Resonances,” the album’s closing track. These are freer duets between the saxes, while both drummers are  invited to expand their own ideas. About halfway through the tune the pattern slightly shifts; it is still alternating saxes and rhythm section, but with more overlap. Pianist Mitchell is allowed to stretch out. We cycle through short solos as the meter coheres and the rhythm section becomes a unit. The saxes comment via underneath, and the song fades out.

There may be some slightly overused approaches in Path of Totality. Among them: the fragmentary nature of the horn lines and the horns’ relationship, which regularly moves from unison into a phasing in and out of each other’s lines and then into a call and response with the rhythm section. However, overall these compositions and arrangements are powered by a infectious creativity as well as great virtuosity in the soloing — by all members of the group. The array of keyboards, re-combinations of the main musicians, and the addition of others to supplement the band generate an enormous array of colors. This is a distinctive recording, put together with great attention to form and detail — and performed with enormous skill.